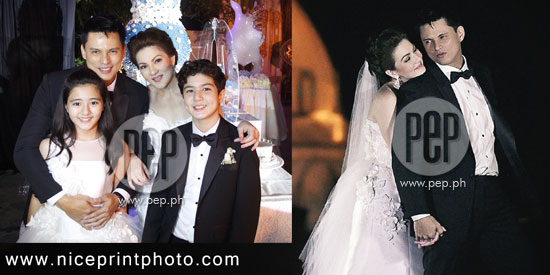 Carmina had the sweetest shock of her life today, November 15, when longtime partner Zoren surprised her with a lavish wedding at Fernbrook Gardens, Portofino, in New Alabang, Muntinlupa.

The civil wedding was officiated by a lady judge.

The whole thing was a surprise for the bride. She was totally not in the know.

This was totally Zoren's grand gesture.

Even the wedding gown was created without Carmina ever going for a fitting.

Zoren simply went to designer Paul Cabral and, together, they got the details of Carmina's size and the look of the gown she would love.

Around 3 p.m., Carmina arrived at the venue, thinking she was going to a family shoot for one of their product endorsements.

Around the same time, Zoren had an interview with the TV crew of ABS-CBN, the network that Carmina is under contract with at this time.

Upon arriving, Carmina was brought to the lower ground area where she had her makeup done.

Unknown to her, the makeup area was equipped with hidden cameras, as the guests waited in an area beside the reception hall.

TV host Boy Abunda was in on the act. He was ostensibly there to interview Carmina.

Thirty minutes before Zoren proposed, the guests were briefed on the flash mob that was going to take place, led by the dance group G-Force.

Also part of the drama were two very important persons: Cassy and Mavy, Carmina and Zoren’s twins, who were taught by the G-Force how to dance for the occasion.

Then, Zoren pretended to get into a fight with one of the crew members doing the shoot.

People around were laughing at Carmina's reaction to the fight.

Trying to appease her husband and the crew member, the actress-TV host said: "Tama na 'yan, I'm so pretty!

After this, Carmina got confused because the people around started to dance to the tune of Rihanna’s “We Found Love.”

The formal proposal happened under a man-made cherry blossom tree. Cherry blossom trees are a favorite of Carmina, and one of the most recent family vacations they took abroad was to Japan, during cherry-blossom season.

And, of course, Carmina said "Yes!"

During the wedding march, Zoren took time to apologize to Carmina's father because the wedding, after all, came after the couple have had their twins.

During the exchange of wedding vows, Zoren said something about wanting another set of twins.

Carmina replied by joking that she still remembers how they did it: "Halika, uwi na tayo!"

After the wedding ceremony, Boy asked Carmina how she felt.

After the ceremony, Cassy was out of breath and had to be ushered outside the wedding area.

Zoren had been saying in his interviews that he wanted his wedding to Carmina to happen within this year.

Zoren kept his word. He married Carmina after 12 happy years of being together.