Chiz Escudero and Heart Evangelista get married in Balesin 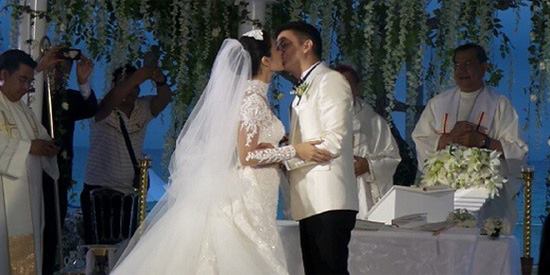 At around 5:20 P.M. today, Chiz and Heart were pronounced husband and wife.

Held at the Balesin Spa of the exclusive, for-members-only private resort, the makeshift altar was filled with white wisteria and climbing vines, reminiscent of Edward and Bella's romantic wedding in the Hollywood movie, The Twilight Saga: Breaking Dawn.

The couple originally planned to exchange I do's in the newly built Royal Villa of Balesin. The owner even fast-tracked its construction as soon as he learned about Chiz and Heart's engagement last August.

But when the couple was finalizing wedding preps, they opted to hold the ceremony at the Balesin Spa instead, because of its spacious garden area.

The wedding ceremony was officiated by Bishop Arturo Vasquez, a close friend of Senator Chiz from his hometown in Sorsogon. Concelebrating the Mass were Fr. Jerry Orbos and Fr. Roger Joseph Erestain, who are also close to the groom.

Her older sister Camille Ongpauco is the maid of honor, while the actress's other siblings Michelle and Lissa are part of the secondary sponsors.

President Benigno "Noynoy" Aquino, on the other hand, was supposed to be Chiz's Best Man. But in a recent exclusive interview with PEP.ph (Philippine Entertainment Portal), the senator revealed that he asked PNoy to skip the Balesin wedding and invited him to the Manila reception on February 18 instead.

Senator Chiz's brother Philip Escudero acted as proxy for PNoy as Best Man for the wedding.

Heart and Chiz's nuptials was made more special with music from the Manila Philharmonic Orchestra's (MPO).

MPO also accompanied the live performance of Mark Bautista who sang "How Did You Know?" for Heart's sentimental bridal walk.

Other singers chosen by the couple to sing at the reception are former Sunday All Stars mainstay Kyla and Kapuso singer Jaya.