Kim Chiu reacts to breakup of Gerald Anderson and Maja Salvador: "Everything happens for a reason." 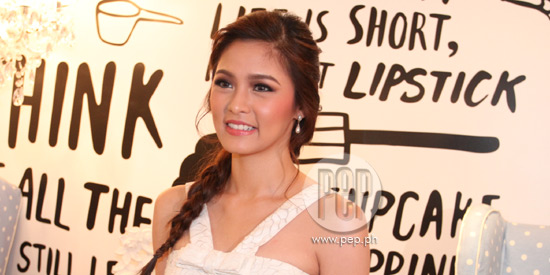 Kim Chiu tells Maja Salvador to "stay strong" now that she has broken up with Gerald Anderson.

Before Maja and Gerald became an item, Kim had a relationship with the Kapamilya actor.

What is Kim's reaction to the breakup of Maja and her ex-boyfriend Gerald?

She added, "Siguro it's their decision.

Does this breakup have an effect on her friendship with Maja and/or Gerald?

Kim believes that Maja will be able to surpass this challenge in her life.

Kim also revealed that she hasn't talked to Maja and Gerald since news of their breakup was confirmed last week.

Read: Gerald Anderson and Maja Salvador “taking a break” from their relationship

EX-GIRLFRIENDS. Kim and Maja are now both ex-girlfriends of Gerald.

It will be recalled that Kim and Maja had a falling out when Gerald hooked up with Maja in the past.

What was Kim's initial reaction when she found out?

"They are asking for privacy and respect, so sana ibigay natin, kasi they deserve it naman as individuals.

"They deserve to be respected by fans and lahat ng tao."

What is her advice for Gerald and Maja now that they have parted ways?

What was the biggest lesson she learned when she herself experienced breaking up with Gerald in the past?

What is Kim's advice for women who are dealing with a breakup?