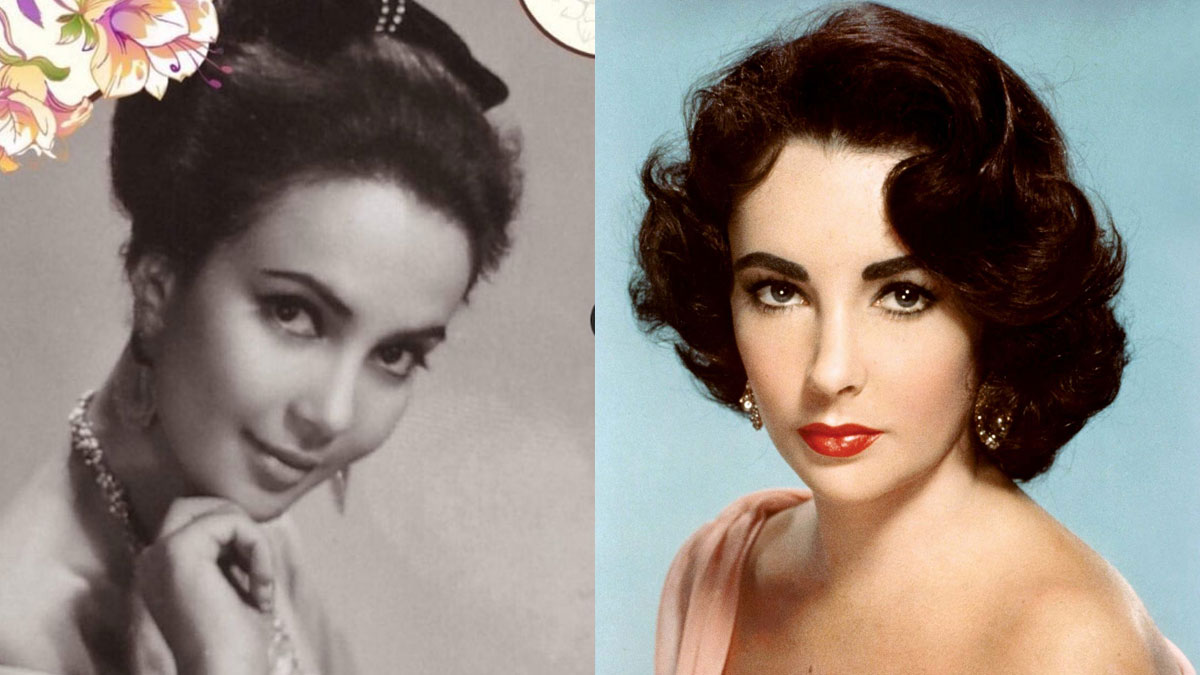 Amalia Fuentes on being called the "Elizabeth Taylor of the Philippines": “The truth is that I never really liked it... I was starting in showbiz when that ‘title’ was given to me, but I wanted to have my own identity, to be known on my own merits and not because I’m being likened to somebody.”

When did Amalia finally come face-to-face with Elizabeth Taylor?

It happened in the ‘80s when she and estranged husband Joey Stevens watched Elizabeth in the play The Little Foxes in London’s West End.

Amalia wore a white dress which she bought during an earlier trip to Italy and purposely wore a curly hairstyle reminiscent of one Elizabeth wore in one of her movies. She and Joey sat at the first row.

After the intermission, they could heard whispers (you know, could she be Elizabeth Taylor?) as they returned to their seats, occupying the front row instead of their original front-row seats.

More whispers: She couldn’t be Elizabeth Taylor. She’s in the play, so why would she sit with the audience?

After the show, Amalia rushed to the backstage door and waited for Elizabeth to come out, ready with her Playbill to be autographed by her.

At 5’5” wearing three-inch heels, Amalia towered over Elizabeth who was only 5’1” tall.

“I was literally looking at the back of her head,” said Amalia, “so I thought of doing something to make her look at me.

"I said, ‘You know, I’m also an actress and in my country, they said that I look like you!’

"That did it. Elizabeth raised her head and, with her violet eyes (that, I would learn later, turned blue-green when she was under the sun), she looked at me and smiled, saying, ‘Hmmm,’ signed my Playbill and sped away in her chauffeur-driven car.”

“The truth is that I never really liked it.

"Even in the case of identical twins, one is always slightly different from the other.

“I was starting in showbiz when that ‘title’ was given to me, but I wanted to have my own identity, to be known on my own merits and not because I’m being likened to somebody.”

Amalia recalled that when Sampaguita launched her, Doc Perez saw that she was a cross between Elizabeth Taylor and Linda Darnell and since Elizabeth was the bigger star, it was logical to just market the new discovery as the Elizabeth Taylor of the Philippines.

At that time, Philippine Movies was so heavily influenced by Hollywood that Filipino actors and actresses were publicized as Hollywood’s local counterparts.

“I chose a slot machine near the door, dropping small coins just for fun.

"Then, I noticed that a man with several escorts was walking in my direction. I thought they were headed for the door.

"I was surprised when he walked straight toward me and said,” Hi, I am Eddie Fisher!’ Of course, I knew who he was!

“I started asking Fisher, ‘Is she beautiful? How does she look in person?’ Excited ako.”