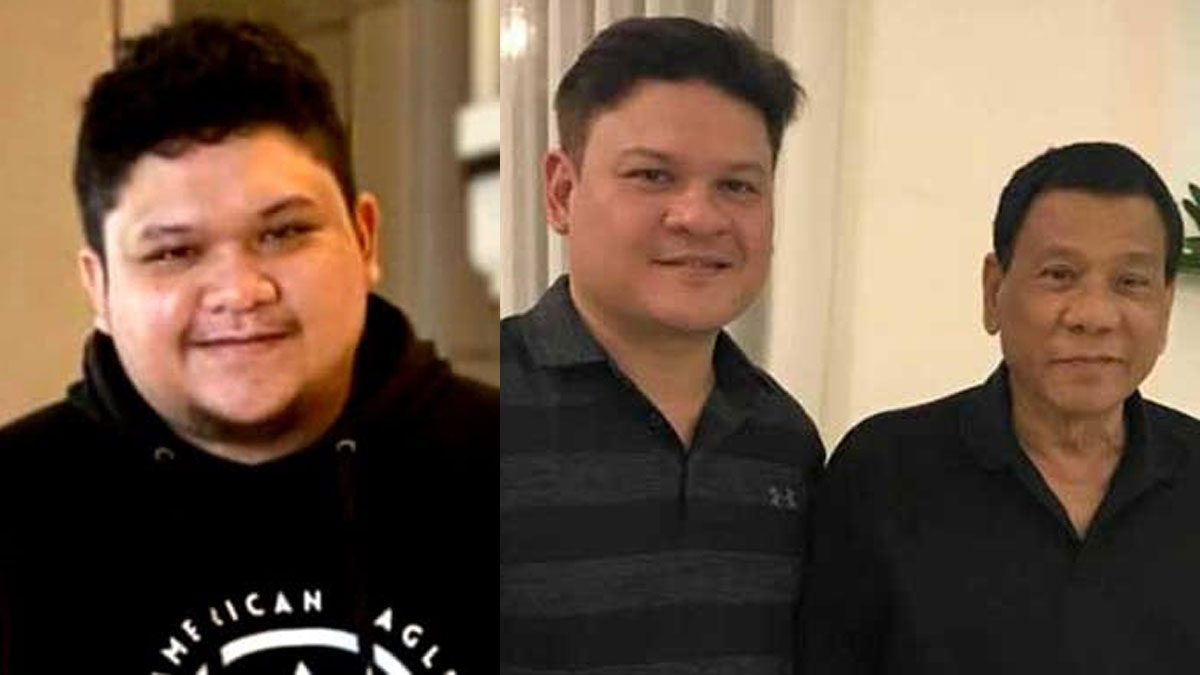 Omar Duterte (left) giving lengthy excuse for skipping COVID-19 precautions of S&R in Davao City: "This issue has blown up so much that it has caught the attention to the people of my life most of whom already informed me of what happened. So, I decided to give my 2 cents..." Omar is the son of Deputy House Speaker Paolo Duterte and the grandson of President Rodrigo Duterte.
PHOTO/S: Facebook

Bahagi ng pahayag ni Paolo, na anak ni Presidente Rodrigo Duterte: "This incident is unfortunate given the health emergency that we are facing these days—while most of us are pre-occupied with efforts to protect every Dabawenyo, especially our frontliners and government responders and volunteers.

"It is with humility that I apologize for the behavior of Omar and his impertinence shall be dealt with accordingly."

OMAR EXPLAINS HIS SIDE

"I don't usually make a big deal out of things.

"Those who know me know that I keep things on the down low and I never even make myself known in the room.

"Not only for safety reasons, but because I'm the type of guy who never wants to be the center of attention.

"I find solace in the people who know me and I'm not talking just about my family, I'm talking about the people who have met me and know who I really am.

"BUT this issue has blown up so much that it has caught the attention to the people of my life most of whom already informed me of what happened.

"So, I decided to give my 2 cents and leave it to those who gave their opinions to know my side of what happened.

"So the only reason for me not following protocols were:

"1.) We were already wearing gloves and followed proper hand hygiene by the time we arrived at SnR.

"The staff of SnR even insisted we enter due to them seeing we already had put on gloves and followed proper hand sanitation.

"Although I personally would have laughed at the idea of washing hands in front of people while not a moment ago they just saw us putting on gloves and washing them.

"It seems that some people took the protocols to the letter that even latex gloves aren't enough to prevent the virus from infecting our hands within those gloves.

"To those people who felt I should have followed protocol whilst being fully gloved, I'm sorry.

"If I had known that it shouldn't be seen as comedic to wash your hands moments after putting on gloves, I would have gladly just washed my hands and followed the protocol.

"I know this is not a laughing matter and for this, I cannot begin to express the great feeling of remorse of not following the protocols thinking that the gloves were enough.

"2.) People seemed to have a issue with the things I bought.

"I admit it was rather insensitive of me to buy food (shrimp, cajun spice, lemons, white vinegar) to cook at home and some drinks (some bottles and a six pack of beer) to celebrate the 1-year anniversary of our wedding with my wife.

"I already had in mind that a home-cooked meal and a glass of wine at home would be the perfect celebration due to the dire times we are facing with the Corona Outbreak.

"But I now know that this was wrong.

"Trust me in saying that if I had known before, that cooking your dinner at home with your family and staying at home to celebrate your anniversary with your family was seen as a luxury, I would have chosen to sleep instead.

"So that's it. Again, I'm sorry for not following the protocols.

"I was wrong in implying that applying proper sanitation yourself and putting in gloves was enough reason for me to not wash them.

"But I now know that even with all your preparations, protocols are protocols and no one is above them.

"Even though they insisted on me going through without me washing my hands, I should have insisted in washing them instead. For all this I am sorry.

"Thank you for reading my side of what happened. Good evening and take care always."

Get the latest stories on COVID-19.
All you need to know from your trusted Summit Media network. Sign up here for regular updates delivered to your mailbox.
The email address you entered is invalid.
Thank you for signing up. We'll send updates directly to your inbox!
Read Next
Read More Stories About
Omar Duterte, paolo duterte, Rodrigo Duterte, COVID-19, S&R, COVID-19 news
Recommended Videos
Post a Comment
Latest Stories