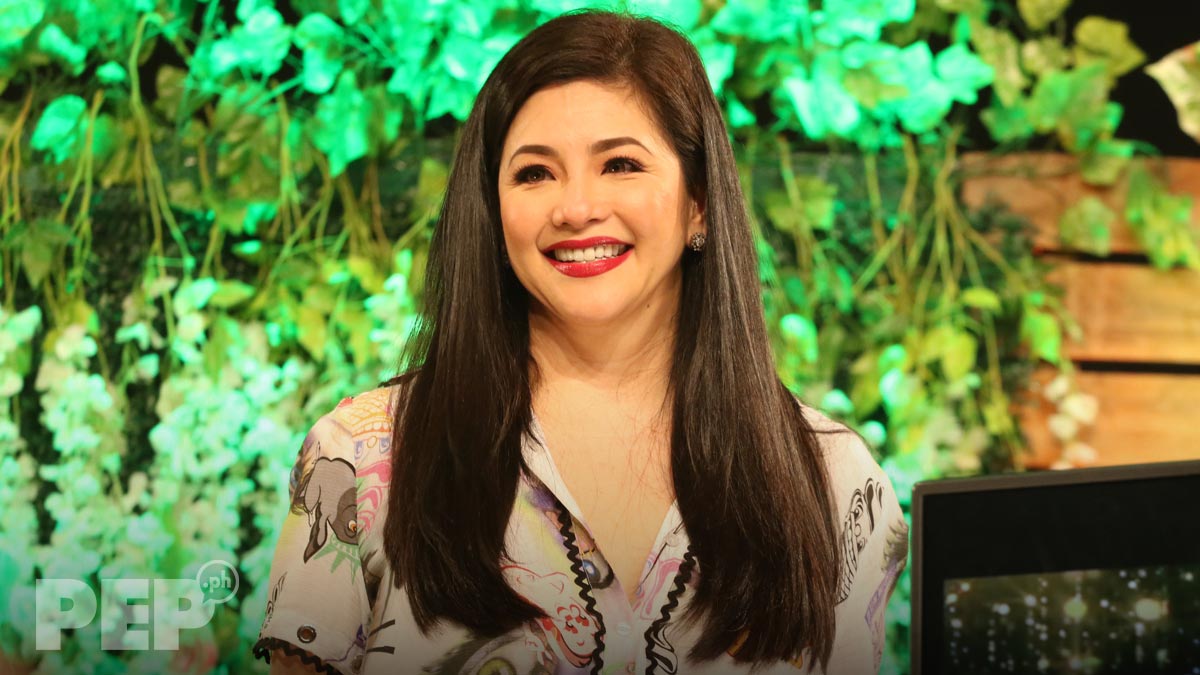 Hailed as Asia’s Songbird, Regine Velasquez worked her way up the showbiz ladder to become a successful and influential recording artist and concert performer with parallel careers as TV host and movie actress.

She was born Regina Encarnacion Ansong Velasquez on April 22,1970 in Tondo, Manila as the eldest child of Gerry and Teresita Velasquez.

Her three sisters are Cacai and the twins Diane and Deca, and their only brother is named Jojo.

From Tondo, the family moved to Hinundayan town in Southern Leyte and lived there for a few years before moving again and finally settling down in Balagtas, Bulacan.

At the tender age of four, Regine—whose childhood nickname was Chona—showed great interest and talent in singing.

Two years later, her father Gerry, who would later be known in and out of showbiz as Mang Gerry (now deceased), started giving Chona vocal training by submerging her neck-deep in sea water while singing.

Soon, the young singer joined singing contests, starting with the one organized by the radio show called The Tita Betty’s Children Show.

She then represented her school, St. Lawrence Academy in Balagtas, at the annual Bulacan Private School Association (BULPRISA) competition, and won the Vocal Solo and Vocal Duet awards.

When Chona turned 14, her father deemed it was the right time for her to join the big league via Ang Bagong Kampeon, the singing competition aired on RPN-9 and hosted by legendary singer Pilita Corrales and ace comedian Bert “Tawa” Marcelo.

Chona breezed through the audition and daily rounds, and reached the eighth week undefeated and ultimately copped the grand prize.

Her prize included a recording contract with OctoArts, which produced and released her very first single, "Love Me Again," in 1986.

Though the song didn’t create much of a stir among radio listeners and record buyers, it paved the way for Chona to be noticed by her fellow OctoArts artist Pops Fernandez, who was then co-hosting—with equally popular singer Martin Nievera—the musical program Penthouse Live on GMA-7.

Chona’s guest appearance on Penthouse Live on February 16, 1986 inspired the show’s producer, Ronnie Henares, to sign her for a talent management contract.

When Martin learned that Chona’s real name is Regina Encarnacion, he suggested for her to change her stage name to Regine Velasquez.

HOW SHE BECAME ASIA'S SONGBIRD

With Ronnie Henares as her manager, Regine scored a recording deal with Viva Records, which produced her first-ever full-studio album: the eponymously titled Regine.

To promote her album, Regine sang in the shows of GMA-7, as well as in ABS-CBN, which, at that time, had just reopened following the downfall of the Marcos regime and the success of the EDSA Revolution.

She became a mainstay in the ABS-CBN shows Triple Treat (headlined by Randy Santiago, Gino Padilla, and Keno) and Teen Pan Alley (alongside Janno Gibbs and Bing Loyzaga).

To celebrate her 18th birthday in 1988, Regine was set on headlining her first solo concert, but the producers backed out reportedly because the international band, The Jets, would be performing on the same date.

She vented out her frustration through her hair and had a boyish pixie cut—an act that turned into a fashion statement and became her signature look for a long time.

The following year, a stylish and elegant Regine slayed the tough competition at the 1989 Asia Song Festival in Hong Kong with her show-stopping performance of the Broadway tunes "You’ll Never Walk Alone (from Carousel)" and "And I Am Telling I’m Not Going" (from Dreamgirls).

And that’s how she earned the title, Asia’s Songbird. 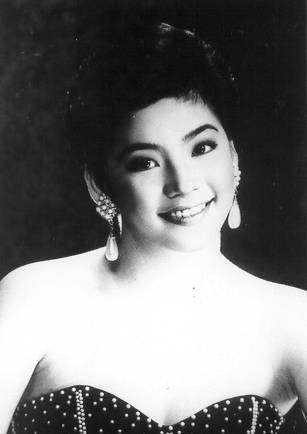 Fueled by her international win, Regine became unstoppable in reaching the top.

Her second album, Nineteen ’90, was a big hit—thanks in large part to her version of "Narito Ako," the 1978 ballad written by Nonong Pedero and originally sung by Maricris Bermont.

The success of Nineteen ’90 paved the way for the realization of her aborted dream of headlining a solo career two years earlier.

Narito Ako, The Concert finally happened at the Folk Arts Theater in Pasay City, and turned out to be a huge success.

Regine went on tucking more albums and concerts under her belt, while collaborating with other singers, songwriters, arrangers, and producers here and abroad.

She sang with Jose Mari Chan for his song, "Please Be Careful with My Heart," and provided backup vocals for Gary Valenciano’s song, "Each Passing Night."

For her own albums, the Filipina singer did a duet with American music legend Paul Anka in It’s Hard to Say Goodbye, and Hong Kong star Jacky Cheung in In Love with You.

She also ventured into musical theater by playing the leading lady in Kenkoy Loves Rosing (1992) and as Maria Clara in Noli Me Tangere (1995).

She passed the Miss Saigon audition, too, but she opted not to push through with the training abroad for the lead role of Kim in the hit West End and Broadway play.

At the turn of the new millennium, Regine reached her peak.

Her 10th studio album, R2K, hit the platinum status 12 times, making it her best-selling album of all time.

Its spinoff, R2K: The Concert, also broke records, when it was staged on April 7-8, 2000 at the Araneta Coliseum, in terms of production values and audience reception.

She expanded her reign in the realm of TV by headlining GMA-7’s musical programs S.O.P., Party Pilipinas, and Sunday All Stars, as well as several musical specials.

She helped discover and develop new talents by hosting the singing contest Star for a Night on Channel 13 and similar competitions in the Kapuso network, such as Search for a Star, Pinoy Pop Superstar, Are You the Next Big Star?, and Bet ng Bayan.

The singing movie star also found success in the TV series Habang May Buhay; Forever in My Heart; Ako si Kim Samsoon; Totoy Bato; Diva; and I Heart You, Pare!

Ogie came clean about his annulment from his wife and his two daughters’ mother, Michelle van Eimeren, who first came to country in 1994 as Australia’s candidate in the Miss Universe pageant held in Manila.

He confirmed his new relationship, as perfectly put in the magazine’s cover blurb, which said, “Ogie’s June Announcement on Regine: ‘I love her, I’m crazy about her.’”

Regine and Ogie, then 40 and 43 years old, had a beautiful sunset wedding on December 22, 2010 at the picturesque spot of Terrazas de Punta Fuego in Nasugbu town, Batangas.

Clad in a flaming red Monique Lhuillier gown, the radiant bride ended her humorous but tearful wedding vows by singing the chorus of the APO Hiking Society love song, "Pag-ibig." 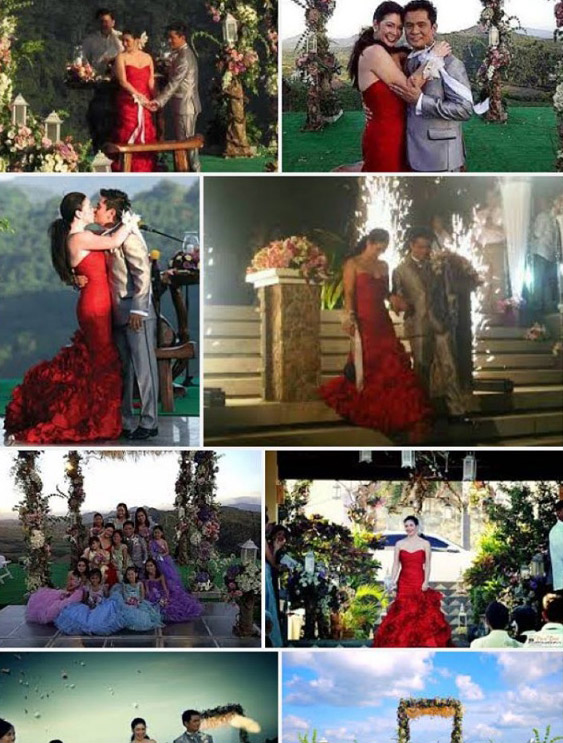 DEALING WITH A MISCARRIAGE

Regine gave birth to her and her husband’s first child together on November 8, 2011. They had their son baptized Nathaniel James and nicknamed Nate.

Almost five years later, the mother of one revealed in her March 2016 guest appearance on the GMA News TV talk show, Tonight with Arnold Clavio, that she had a miscarriage in 2010.

Regine first told host Arnold Clavio that she and Ogie lived together for about three years before getting married.

“Happy na ’ko. Akala ko, hindi na ’ko magkakaanak. Kasi I was busy. I was thin, and I liked being thin. I thought I didn’t want to have a baby.

She explained that she was then busy working in GMA-7’s reboot of the Darna drama series as the villain Electra, who started fighting Marian Rivera’s titular superhero role towards the latter part of the show.

Darna wrapped up in February 2010, and Regine’s own musical drama series, Diva, premiered in March that same year.

“I didn’t even realize depressed ako,” she admitted.

During the interview, Regine seemed to have fully recovered from that period of depression.

“Maybe we should give the baby a name. I had a feeling na girl.”

Nine months after Regine gave birth to Nate, she returned to work in her home network, starting with the showbiz-oriented program, H.O.T. TV: Hindi Ordinaryong Tsismis, and in the cooking show, Sarap Diva.

After H.O.T. TV wrapped up in April 2013, she made a string of Kapuso shows, including the fantasy drama series Mulawin vs. Ravena (2017) and the singing competition The Clash (2018).

The A-list star was then rumored to be transferring to GMA-7’s rival, ABS-CBN, following her husband Ogie’s end of contract with the Kapuso network and becoming a Kapamilya.

Regine ended the rumors when she signed the contract with ABS-CBN on October 17, 2018.

She walked into the corridors of the Kapamilya network’s Quezon City headquarters as a big crowd of well-wishers greeted her.

The warm welcome continued during her meeting with the executives and intensified during the press con held later that day.

“I’m now a certified Kapamilya!” she announced with glee.

She also talked about the end of her 20-year stay with GMA-7 to return to ABS-CBN.

“I love the staff. I love everyone I worked with. And that’s six years. It was very difficult. I was crying and crying. Everyone was crying. Parang ’yong time na ’yon, puwede bang huwag ko nang gawin to?

“’Tapos, biglang nagising ako, nasa ABS na ’ko. But I had to do it. Of course, I had to say goodbye to my bosses.

“You know, they’re happy for me, and they understand. My sister and I are actually still in touch with them. I mean, kinukumusta nila ako. They’re genuinely happy for me.

“Ako, I only have gratitude. I’m so grateful to them. Twenty years ’yon. Inalagaan din naman ako. I have nothing bad to say because I love everyone I worked with there.

“They all took care of me. They love me there, e. Maganda naman ang pinagsamahan namin.”

As a homecoming Kapamilya, Regine has so far become a regular host and performer in the Sunday afternoon musical program ASAP and a judge in the recently concluded singing competition Idol Philippines.

This October, Regine is set to share the concert stage with one of her idols, Sharon Cuneta, in a two-night show, titled Iconic, at the Smart Araneta Coliseum.

Asia's Songbird also returns to the big screen after seven years by playing an important role in Unforgettable, starring one of her self-confessed fans, Sarah Geronimo.

After more than 30 years in showbiz, Regine’s achievements remain unmatched.

Her influence is greatly felt every time a younger singer—from Sarah Geronimo and Morissette Amon to those taking a chance in a singing contest—hits the highest note possible.

Regine is the very definition of birit singing in the Philippines as embodied in her signature songs ("You Are My Song," "Daldalhin," "Pangarap Ko Ay Ibigin Ka") and revival hits ("Sana Maulit Muli," "Ikaw," "On The Wings of Love").