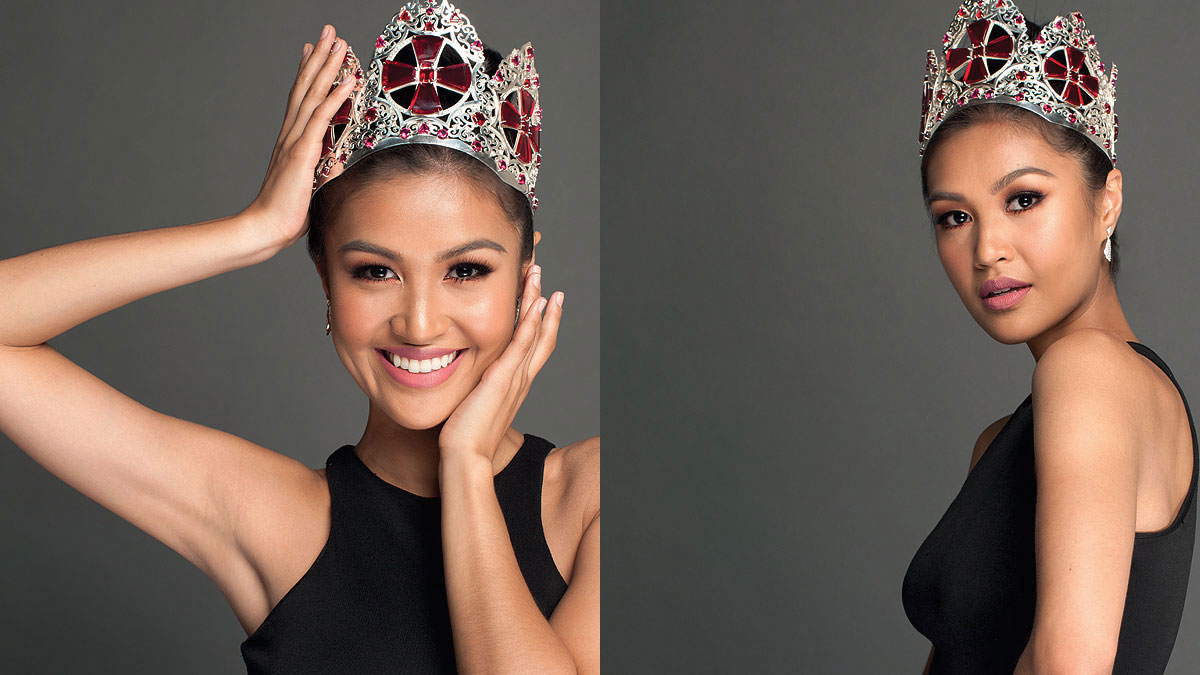 A daughter of well-known showbiz personalities, Winwyn Marquez talks about how she worked hard and beat the odds to prove that she deserves a spotlight in showbiz and in beauty pageantry.
PHOTO/S: Cyrus Panganiban for YES! Magazine

Born to Joey Marquez and Alma Moreno, two names that figured prominently in sports and showbiz in the 1980s and in politics in the early 2000s, Teresita Ssen “Winwyn” Marquez knew what living in the public eye meant early on.

“Our life was an open book, siyempre,” Teresita begins. “My parents are really known.

"My dad was a politician, and si Mama was the same, so we were really exposed to a lot of different situations, and kailangan talaga namin magsalita in front of people.”

The namin that Teresita is referring to here are her siblings—her Kuya Charles Yeoj, her younger brother Vitto Joey or VJ, and her younger sister Maria Maal Venesa or MM.

Having no privacy was a necessary trade-off, especially for a family with important political positions and big political aspirations.

Joey was mayor of Parañaque City from 1995 to 2004, while Alma. who was councilor of the same city from 2007 to 2016 and the first female national president of the Philippine Councilors League (PCL) in 2012, even had plans of running for senator.

Teresita, who confesses to being a shy girl when she was growing up, learned to take the good with the bad. Being exposed to people from all walks of life taught her to be more understanding and less judgmental.

"Kasi nalaman ko na there are different life stories no’ng lumalaki ako. “So wala kaming paki, wala kaming kiyeme. Parang we learned not to take for granted what we have.'

"So, it was like that. It was a normal life but different because it was open to the public.”

Part of having an “open book” family life was having “no secrets.” Teresita—who was born on May 4, 1992, in the town of Santa Fe, on Bantayan Island, Cebu—knew early on that she also has half-siblings.

Teresita’s young life took a different turn when she was 12 years old. Her parents Joey and Alma, after 13 years of marriage, decided to call it quits in 2004. While that was a painful decision for all parties involved, Teresita remembers that her parents explained to her and to her siblings why they were separating.

“Everything was really explained to us by our parents. So, wala kaming masyadong bigat sa heart, kasi pinaintindi nila naman sa amin.”

Even if her parents decided to part ways, Teresita’s love for them didn’t change.

“Kasi they made sure naman na kaming magkakapatid, intact pa rin kami. ’Yon naman, I can never take away from my parents.”

If there’s one thing that Teresita admires most about her parents, it’s their “madiskarte” and go-getting attitude.

That same go-getting attitude is what drove Teresita, and continues to drive her, to chase her dreams. Ever since she was a little girl, she always had the dream to be in the spotlight, entertaining people just like her mom Alma, who was a big star in the ’70s and ’80s.

She adds that her paternal aunts Melanie Marquez, who won the title of Miss International 1979, and Via Hoffman, who is a former model, also inspired her to nurture beauty-queen aspirations.

“Nagagamit ko siya as platform to help other people. I can act also with my facial expressions. Perfect siya for me. So, nag-merge siya sa isang field.

But more than her paternal aunts, it was Miriam Quiambao—who represented the country in the Miss Universe 1999 contest and placed first runner-up—who left an indelible mark on Teresita’s impressionable mind.

Teresita became fascinated with Miriam because it was the first time she realized that in a sea of mostly fair-skinned and blonde-haired candidates, the Filipina beauty was a standout.

"She’s very Filipina. And the way she talks now also. Parang I love that her face is very strong as well. Magaling siyang sumagot. ’Tapos, the way she projects is very elegant, very graceful. Parang ako—‘Miriam Quiambao, oh my God!’”

Throughout high school, Teresita held on to her beauty-queen dreams. While she was raring to try to turn her dreams into reality, she didn’t know how and where to start.

That was until a dusky Bicolana beauty by the name of Maria Venus Raj made waves at the Miss Universe 2010 beauty pageant.

Venus didn’t go home with the crown, but her story and experience (and her much-talked-about “major, major” answer in the Q&A portion) at the annual prestigious beauty pageant opened Teresita to the idea of getting into training camps.

“My stylist introduced me to Jonas when I was 16. So, do’n na nag-start mag-usap, ganyan. Pero wala pa, kasi bata pa nga daw ako, hindi pa puwede. So I started training when I was around 21. Training in a way na putol-putol, parang wala lang, lakad-lakad.”

But after seeing the other girls in the training, girls who were much taller, more graceful, and prettier than her, Teresita—who stands 5-foot-7, which is considered rather “short” in beauty pageants—started having second thoughts.

It was at around this time that Teresita decided to enter showbiz through the GMA Sunday variety show Party Pilipinas, where she got to do her other love: dancing and acting. Her stint in the show also helped her regain the thing that she had lost earlier: self-confidence.

When she turned 21, Teresita thought it was high time she gave her beauty pageant dreams another try.

"Q&A pa lang, make it or break it na sila. Whole package siya. They’ll really train you, as in, very intense. And it worked naman for me. Thanks to Aces & Queens.”

A year later, Teresita suddenly decided to put everything that she had learned to the test. Her decision to join the annual national beauty pageant, however, came at the 11th hour.

WINWYN: FROM BINIBINI TO REINA

Teresita was a front-runner throughout the preliminaries of Binibining Pilipinas 2015. She even topped several polls conducted by beauty pageant groups and forums. If the titles at stake were based on popularity alone, online and on the ground, Teresita would have bagged the biggest prize even before coronation night happened.

Teresita tells YES! that she was not eyeing a particular title at the time. Her aim was to give it her all, get the chance to represent the country in an international contest, and make her family proud.

"’Yon naman ang purpose ng isang beauty queen, e. It’s not about the crown, it’s about doing your duties and responsibilities and being able to represent the country well.”

She only got as far as the first cut: the Top 15. It was Pia Alonzo Wurtzbach who took home the Binibining Pilipinas–Universe title that night.

Teresita admits that it was a painful loss.

"So, for me, it was masakit, pero I had to accept it. So, after that, ang sabi ko, sige, hahasain ko ’yong sarili ko.”

For six months, Teresita nursed her wounds. She went traveling. She spent more time with her family and with her boyfriend, Mark Herras. She took part in activities that took her mind off beauty pageants. Eventually, she forgot about the pain.

Her parents tried their hardest to talk her out of it, but Teresita’s focus was unwavering. She felt in her heart that it was where she truly belonged: on the stage.

On September 3, 2017, in front of a packed crowd who had come for the Miss World
2017 beauty pageant at the Mall of Asia Arena in Pasay City, former courtside reporter Laura Lehmann was hailed as Miss World Philippines—and Teresita Ssen “Winwyn” Marquez was crowned Reina Hispanoamericana Filipinas, a title that earned her a ticket to represent the Philippines and Asia for the very first time at the Reina Hispanoamericana 2017 in Santa Cruz, Bolivia.

Teresita was elated and excited and edgy all at the same time.

With the proverbial monkey off her back, Teresita was able to do what she had failed to do in her previous competitions: have fun and forget about the pressure.

“’Buti na lang, some of the girls can speak English. If mabait ka sa kanila, mabait din sila sa ’yo.

“I was really enjoying. I love dancing. And it was all about dancing, moving, di ba?

On November 4, 2017, Teresita made history by being the first Filipina (and the first Asian) to win the Reina Hispanoamericana crown. Her victory was all the more sweet because she came into the competition without any expectations at all.

Looking back, Teresita has finally understood why she didn’t win any title in Binibining Pilipinas 2015 and why everything happened the way it happened. Turned out, whoever was steering her life had a bigger plan for her.

“For me, it’s bigger because that’s a challenging pageant. Oh my God, it may not be Miss World, Miss Universe, or Miss International, but it’s a pageant that no one really knew what you have to do, and they’re all Latinas and they’re really good, di ba?

As the first Asian Reina Hispanoamericana, Teresita is responsible for promoting Hispanic culture in the Asian region and beyond.

“The organization wants me to promote the Hispanic culture here in the Philippines. Gusto nila ako mag-ikot din sana sa Asia to introduce how beautiful it is.

"Sabi ko naman, ‘I’m not trying to hide the past. I’m not gonna conceal it. Kailangan pa ring malaman ’yong nangyari. But at the same time, you have to know our history, na parang ’yong positive side na natutunan natin, which is religion, di ba?

Teresita, for her part, wants to use her title as a platform to push for her advocacy, which is giving access to education to more kids.

“I also have an advocacy of education. So, I’m trying to perform workshops for kids, acting, singing, dancing. So, it’s just really about helping people.

"I think all beauty queens have the same duties and responsibilities. They just have to stay focused. So, that’s the main goal.

“I love kids. Kasi, when I look at them, they always smile, parang wala silang problema. So, ’yong vibes nila, nakukuha ko.

"When you’re around kids, you just wanna have fun. You wanna be curious about everything and just be positive. So, that’s why I love being surrounded by kids.”

Teresita tells YES! that she’s excited to be going around the country and in different parts of Asia. She waited so long for this once-in-a-lifetime opportunity to arrive. She doesn’t want to plan too far ahead. She just wants to enjoy her moment as the Reina Hispanoamericana to the fullest.

Reina Teresita Ssen Marquez. It does have a nice ring to it.