2022 PRESIDENTIABLES | Manny Pacquiao: From kargador to boxing legend and senator 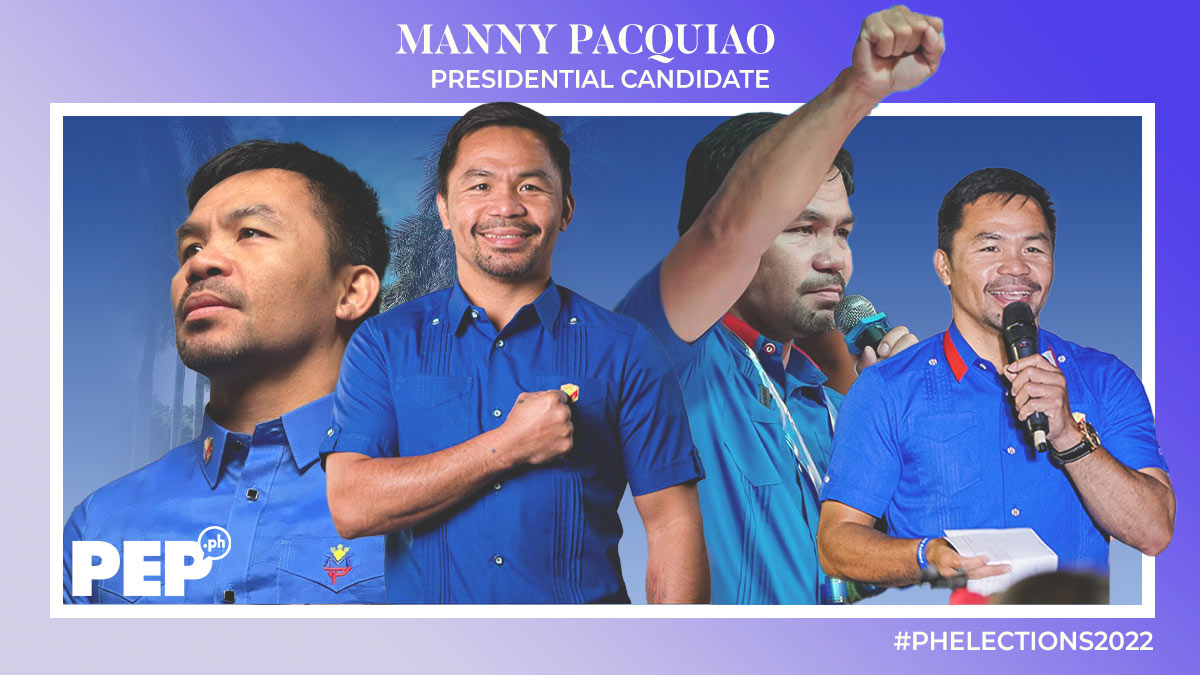 A born fighter, Manny Pacquiao was a kargador in Sarangani who fought his way into becoming a welterweight eight-division champion, a senator, and now a presidential aspirant.
PHOTO/S: Manny Pacquiao Facebook
ILLUSTRATION: Igi Talao

Running Under: Progressive Movement for the Devolution of Initiatives (PROMDI)

Who else remembers Manny Many Prizes?

The GMA-7 comedy-variety show, which aired from 2011 to 2012, featured Manny Pacquiao as the Pambansang Ninong, a charitable figure who gave away cash prizes.

In an interview with PEP.ph (Philippine Entertainment Portal) in 2012, Pacquiao admitted that oftentimes, he gives away his own money to help poor contestants.

One time, he took pity on a contestant who lived in the cemetery, so he bought them a house.

The world-renowned boxer believed this was a way to honor his faith.

Pacquiao has the same mantra when it comes to politics. He believes his political career allows him to help a greater number of people.

Knowing this, it’s not a surprise that Pacquiao is now running for President.

In his autobiography titled Pacman: My Story of Hope, Resilience and Never-Say-Never Determination that was published in 2010, Pacquiao narrated his very humble beginnings.

Pacquiao was born to abject poverty in an isolated town in Bukidnon.

When he turned two, his family moved to an even more isolated location in Sarangani. Manny, his parents, and his five siblings lived in a one-room nipa hut.

"We were poor, very poor, and we lived in an isolated part of our small village," he said.

"There was only 'less,' and I was introduced to a concept of living with less from the first day of my life."

Pacquiao was exposed to hard work at a very young age.

He would help his family gather resources, carrying heavy buckets of water and sacks of rice and flour through kilometers of dirt-covered roads.

Today, he attributes his strong physique to this early labor. Climbing a mountain and walking for miles regularly molded him into shape.

"Now, when I look back, I realize there isn’t a machine in my modern gym that compares to the trek through the wilderness of my childhood. That is where I first developed my strong calves."

Pacquiao also started boxing at this stage. He recalled that he started beating up a banana tree after watching a movie that starred Bruce Lee.

"I wanted to be just like him, so I spent hours imitating him, punching and kicking the tree. Or so I tried.

"Looking back, I realize now that I must have been obsessed with fighting even at that young age.

Manny won his first fist fight when he was about ten years old. He recalled that it happened when he defended his brother Bobby from his school bullies.

At age 12, Manny began training in a makeshift home gym under the guidance of his uncle, who also helped start his boxing career by having him join fights at a park in General Santos.

Manny remembered winning a lot of those amateur fights, some of them against heavier kids whose ribs he broke.

At 14 years old, Manny decided to leave his family to look for better opportunities in Manila. He didn’t have money for the trip, so he stowed away on the ship.

Money was tough for Manny in Manila. He had to work odd jobs, like scraping rust off metal at a junk yard, washing dishes in small restaurants, and reselling food on the streets.

At times, he had no place to live, so he slept on a piece of cardboard.

Boxing was not far from his mind during these years. Fortunately, in 1995, he found his way to a gym that took him in. The boxing coach there even allowed him to live in the gym. He was 16 years old.

Not long after, he started his career in professional boxing by debuting in the weekly boxing show Blow by Blow. He lied to the producers of the show and said he was 18 just so he could be accepted.

Filipinos believed in an amusing urban legend during Pacquiao’s prime.

It was said that while Pacquiao’s fights are ongoing, the crime rate in the Philippines is at zero. Streets are empty because everyone is glued to their TV sets to watch the boxer beat up his opponent in the ring.

Such was Pacquiao’s hold on the national consciousness in the early 2000s. Massive viewing parties were prominent. Theaters sold expensive tickets for the live pay-per-view of the fights, which were usually broadcast in the morning (because they happened at night in the United States).

Pacquiao fans who couldn’t afford those tickets gathered to have early drinking sessions in front of the television.

Other notable Pacquiao fights were against the following boxers: Marco Antonio Barrera in November 2003, Juan Manuel Marquez in May 2004, Erik Morales in March 2005, Oscar De La Hoya in December 2008, Miguel Cotto in November 2009, and Floyd Mayweather Jr. in May 2015.

Pacquiao announced his retirement from the sport in September 2021.

During his whole professional career, he had 72 fights with 62 wins and 8 losses.

Thanks to boxing, Pacquiao had glory, honor, and riches.

According to various sources, he has earned at least $500 million from professional boxing. This does not include the money he earned for various endorsements for brands like Nike and Alaxan.

In 2007, Pacquiao shocked a lot of his fans when he announced that he was running for Congress to represent South Cotabato.

In an interview, the boxer said he wanted to become a politician to bring peace to the government.

He tried again in 2009, announcing that he will run again for Congress, but for Sarangani this time.

Pacquiao was successful, scoring a landslide victory over a member of a powerful political dynasty in that province. He was then reelected in 2013.

Then in 2015, Pacquiao announced that he was ready to move on from Congress and to a national position.

He ran for Senator and won in the 2016 National Elections, landing in 7th place of the Magic 12.

Pacquiao passed a total of 25 laws during his 12-year legislative career.

Among the laws that he authored or co-authored were the National Bible Day Act, the Handbook for OFWs Act of 2018, Free Internet Access in Public Places Act, Philippine HIV and AIDS Policy Act, and the National Integrated Cancer Control Act.

Critics are not satisfied with Pacquiao’s legislative performance.

He’s considered a top absentee, both when he was in Congress and the Senate.

During the third and final regular session of the 16th Congress, from July 2015 to June 2016, for example, Pacquiao only attended one session day.

Pacquiao did not leave his boxing career even when he was a politician. There were times when he was preparing for a major bout while Congress was in session, which led to absences.

Pacquiao was also hit for not being inclusive. He is a pastor, and is very conservative.

Thus, many have criticized him for voting against bills like the Sexual Orientation and Gender Identity Expression (SOGIE) Equality Bill.

The boxer was also heavily criticized for several homophobic remarks he made in February 2016.

In a video interview, he said people who are in same-sex relationships “are worse than animals.”

These remarks made international headlines, resulting in the loss of some of his endorsements.

There are other controversies that involved Pacquiao.

In 2013, Pacquiao’s bank accounts were frozen after the Bureau of Internal Revenue alleged that he has tax delinquencies of up to PHP2.2 billion. He won this case in 2018.

One can also recall that Pacquiao was rumored to be involved in an affair with actress Krista Ranillo in late 2009. His wife Jinkee confirmed this affair in the January 2010 issue of YES! Magazine.

A friend of Krista, however, told YES! in the same issue that the actress categorically denied the third-party allegation against her. Krista later reiterated in a TV interview that there was no truth to rumors that she and Manny became an item.

FIGHTING TO BE PRESIDENT

Pacquiao announced his intention to run for President in September last year. The following month, he filed his certificate of candidacy under the PROMDI party.

According to Pacquiao, corruption is the reason why millions of Filipinos are poor, and he intends to eradicate this if he wins the race.

He also hit his opponent Ferdinand Marcos Jr., saying that the latter shouldn’t win the elections because of his history of corruption.

"The root cause of our country's problem is corruption and then we would vote for a candidate who has been tainted by corruption? What happened to us as a nation? Where is our intelligence?" Pacquiao said in an interview with Reuters.

Will Pacquiao prevail in the elections? He’s currently lagging in the surveys, but a miracle can still happen.