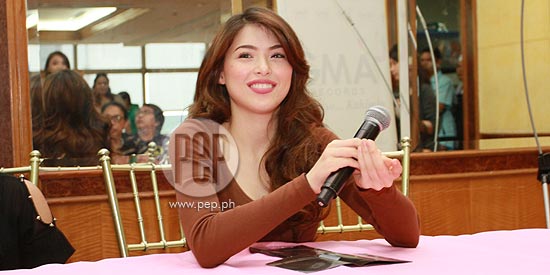 21-year-old actress Kylie Padilla shows off her other side as a singer/songwriter through her debut album Seasons. It is now available on iTunes, Amazon and Spotify and will be available in record bars starting June 30.

Actress Kylie Padilla shows her other side as an artist through her debut album Seasons.

A blooming Kylie Padilla excitedly talked to members of the press last June 26, at GMA Network Center at the press launch of her album.

Prior to the press conference, a video of her single “Gitara” was played via projector and the actress covered her eyes while it was being shown. She felt surreal that her dream of becoming a singer is finally coming true.

Kylie, who recently confirmed her breakup with boyfriend Aljur Abrenica, says that she has already moved on from her heartbreak.

KYLIE THE SONGWRITER. Seasons is an 8-track album that contains original compositions. It was a revelation that Kylie is both a singer and songwriter herself. She wrote five of eight songs in the album including carrier single “Gitara.”

Here's a preview of "Gitara"

“Making this album was truly an emotional journey,” says the 21-year-old singer-songwriter when asked about her album.

She adds, “I got to know more about myself, and I am sure na marami ring makaka-relate sa songs na nasa album na ‘to.”

Kylie recalls how she came up with album. “The story about my album… hindi po kasi pinlano for my career na mag release po ng album.

Kylie is aware that some people might bash her because she has always been known to be an actress and now she’s also releasing an album. Is she ready for this? How is she handling negative comments?

MUSICAL INFLUENCES. Kylie also talked about her inspiration when it comes to writing songs. She admitted that she is really a Taylor Swift fan which is why her songs are somewhat similar to those penned by the American songwriter.

“When I was writing this songs Taylor Swift talaga, then the songs I am writing now iba na, e medyo mas poetic na ng onti so I am excited if ever.

Seasons can now be digitally downloaded via iTunes, Amazon and Spotify while CD formats will be available in record bars starting June 30.