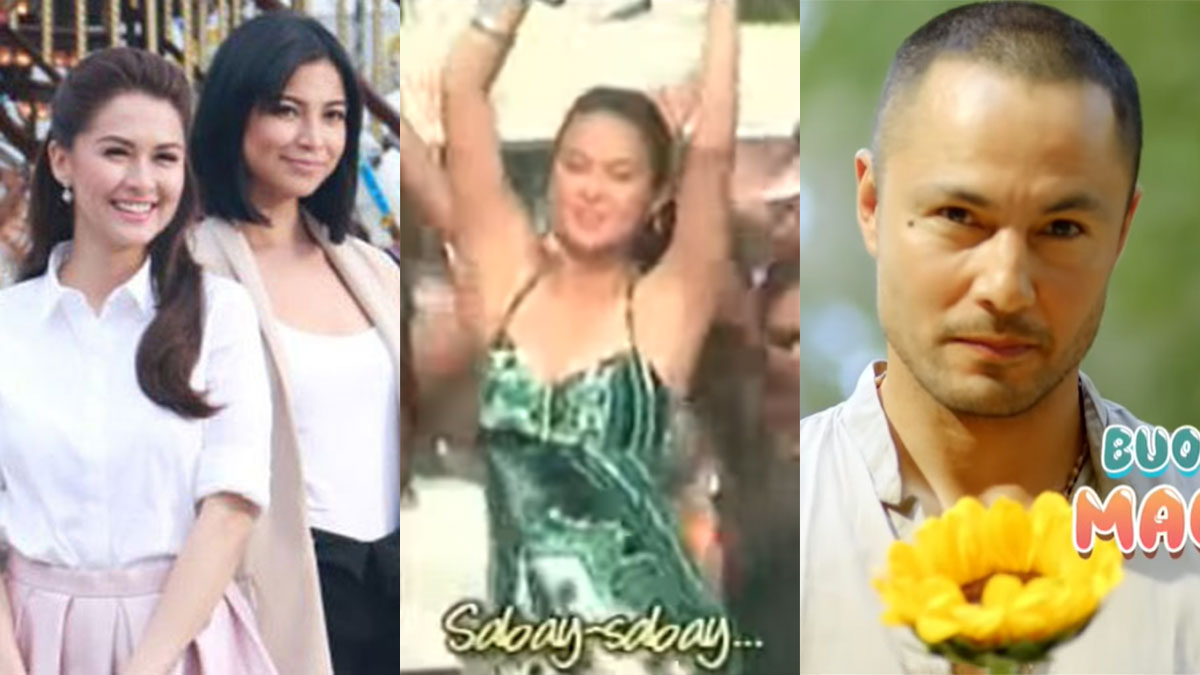 For over ten years, Kapuso viewers have been highly anticipating GMA-7's summer station IDs that have been consistent in highlighting the concept of togetherness among their homegrown talents.

They have banked on "pagiging sama-sama" as their way of showcasing the network’s core value.

Aside from featuring loyal Kapuso artists, the GMA-7 summer station ID doubles as an omnibus plug for Kapuso teleseryes slated to air within the season.

Netizens were quick to notice how Kapuso royalty Marian Rivera dominated most of the network’s station IDs for the past ten years.

PEP.ph (Philippine Entertainment Portal) takes viewers on a trip down memory lane by presenting these GMA-7 summer station IDs through the years:

Richard Gutierrez was the torch-bearer of this campaign.

Mike Enriquez also had his share of spotlight in the short clip.

The summer station ID was set against mountain landscapes unlike succeeding videos that were set mainly in beach locations.

Music and lyrics were done by Geleen Eugenio.

The Kapuso network actually aired several versions of its station ID during this year. Depicting varying genres, there were versions that focused on comedy, drama-romance, and variety shows, among others.

Titled "Sama Summer Ka," the song in this year's station ID was composed by Charlie Teodoro, arranged by Simon Peter Tan, and performed by R&B duo Jay-R and Kyla.

The anthem of the station ID was performed by Julie Anne San Jose and Elmo Magalona who also contributed to writing the song.

GMA-'s 2012 station ID put emphasis on the nationalistic song “3 Stars and A Sun” by the late Francis Magalona.

As a tribute to Francis, who was dubbed as the godfather of Philippine hiphop, the network commissioned his son Elmo to do the rap parts of the song. He was joined by Party Pilipinas mainstays Janno Gibbs and then-Kapuso star Jaya.

Helmed by GMA resident director Mark Reyes, the campaign centers on the simplicity of the Pinoy way of celebrating the summer season. The superimposed text in the video included "maglambingan, mag-kodakan, mag-jamming, mag-bonding, magpa-uso, magpalamig," among many others.

In 2015, Marian was launched as the lead character in The Rich Man’s Daughter, a lesbian-themed series, along with Glaiza de Castro, Adrian Alandy, Katrina Halilli, and Mike Tan.

However, Marian withdrew from the project due to her pregnancy with Maria Letizia, more popularly known as Baby Zia.

Dingdong Dantes’s Pari Ko’y and Gabbi Garcia and Ruru Madrid's remake of Let The Love Begin were also featured in the 2015 campaign.

Rita Daniela was the voice behind “Araw,” the summer station ID’s theme song.

Featured in this summer omnibus plug of GMA-7 were five major shows: one talk show and four teleseryes.

Marian once again starred in a Kapuso SID.

Set against the scenic views of a beach and its calm waters, Marian promoted her Yan Ang Morning talk show, Heart Evangelista and Dennis Trillo had romantic moments for Juan Happy Love Story, Gabbi Garcia and Ruru Madrid chased each other on the beach as they promoted Naku, Boss Ko!, and Louise delos Reyes and Juancho Trivino went on a date for Magkaibang Mundo.

After Dangwa, their first serye together, Janine Gutierrez and Aljur Abrenica had a picnic under the sun as they promoted Once Again.

The theme song was performed by Denise Barbacena.

In line with the title of the network's summer campaign, the video showed Kapuso stars painting colors on a blank slate.

The summer ID gave a glimpse of Jennylyn Mercado and Gil Cuerva’s onscreen chemistry for the Philippine adaptation of My Love From The Star.

Also, cast members of Mulawin vs. Ravena were given adequate exposure in the clip.

Like its previous videos, the short clip simply promoted teleseryes slated for that year.

After being a Kapamilya for six years, Derek Ramsay finally made his first appearance in a Kapuso station ID.

This year’s station ID features the stars of upcoming Kapuso shows to be launched during the second quarter of 2019. These include Derek and Andrea Torres’ The Better Woman, Jennylyn Mercado and Gabby Concepcion’s Love You Two, Jason Abalos and Max Collins’ Bihag and Sanya Lopez’ Dahil sa Pag-ibig. Viewers were able to see their favorite stars having a blast under the heat of the sun.

Kyline Alcantara performed the jingle, which was based on the "Everything's Alright" theme song of the now defunct Kapuso series, Teen Gen.

Some of the lyrics of the original song written by Kapuso singer-actor Mikoy Morales were aptly changed to match the summer theme.