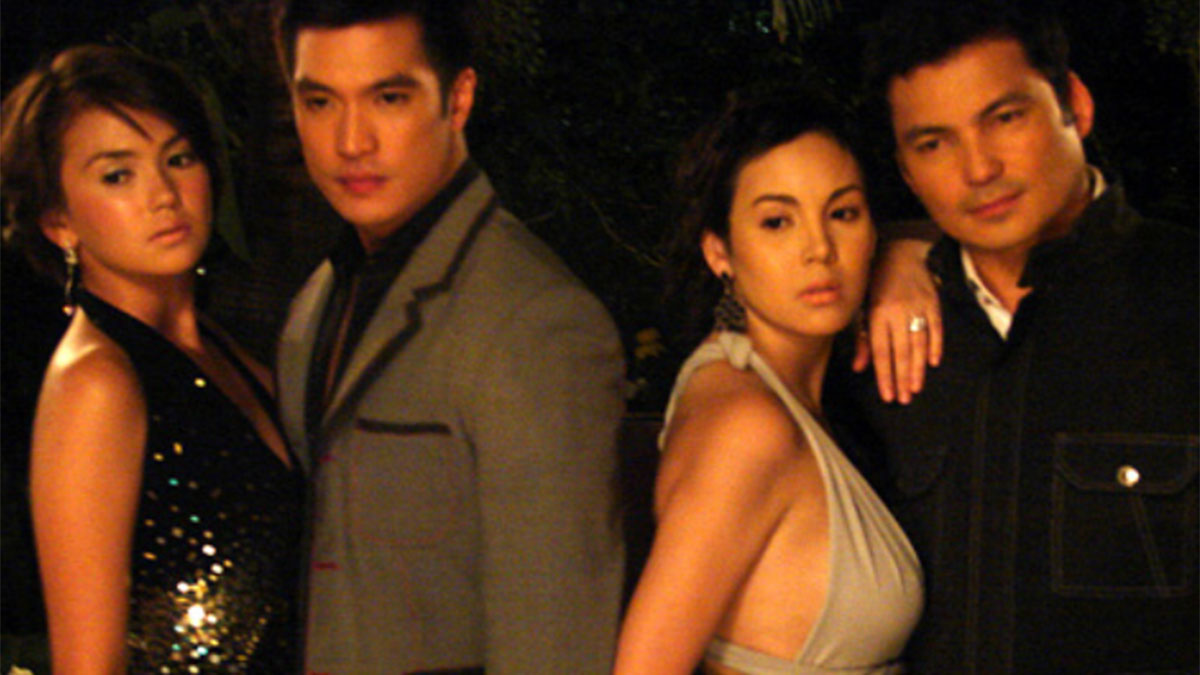 It has been 11 years since Claudine Barretto did a regular TV project with ABS-CBN. Titled Iisa Pa Lamang, this teleserye premiered on July 14, 2008.

It became Claudine's first full-length TV series after she gave birth in 2007.

Iisa Pa Lamang served as the comeback project of Gabby Concepcion, who left showbiz and stayed in the United States for 13 years.

The teleserye was directed by Ruel Santos Bayani, who is now one of ABS-CBN's business unit heads and the TV Production Head for Scripted Format. 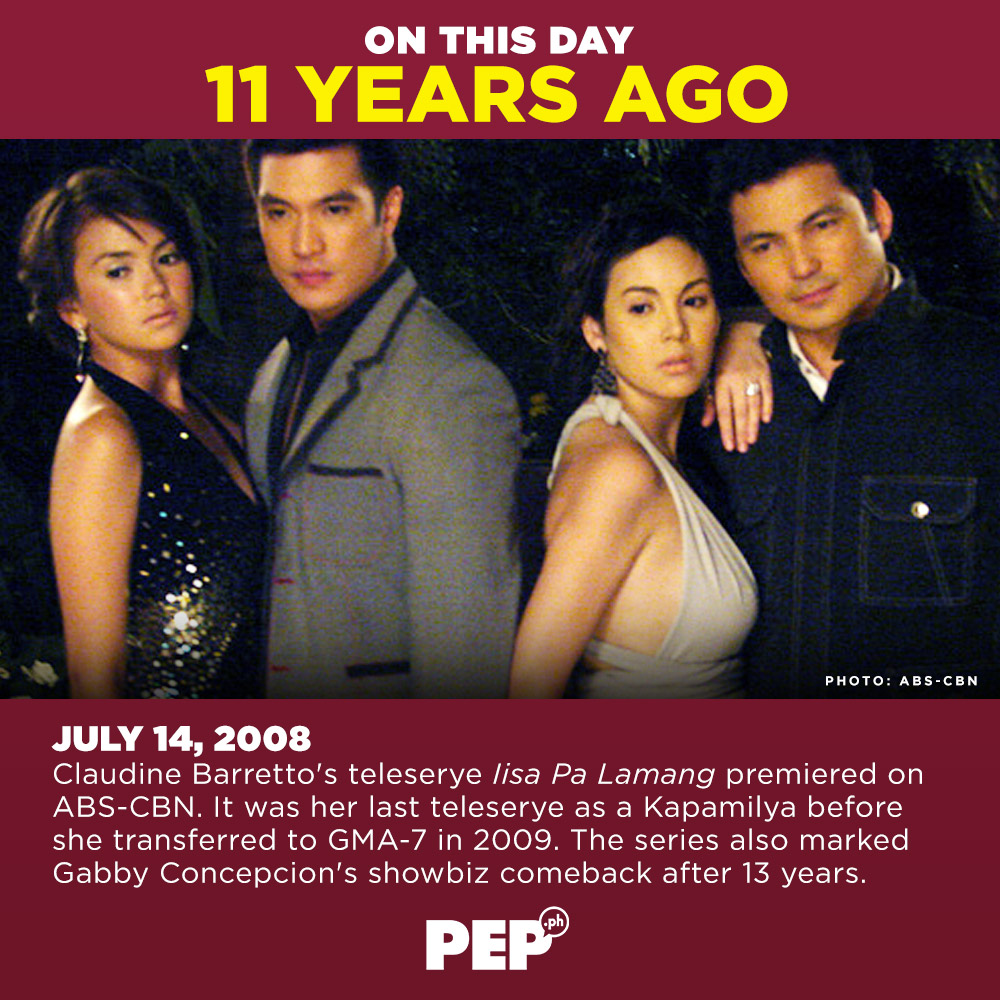 The teleserye Iisa Pa Lamang was Claudine's first full-length drama series after she gave birth to son Santino in 2007, aside from the mini-series SineSerye Presents Maligno.

Fans looked forward to the airing of the teleserye since Claudine was known for sharing the Teleserye Queen title with Judy Ann Santos at the Kapamilya network during that time.

In Iisa Pa Lamang, Claudine played Catherine Ramirez, the vengeful woman who wanted to exact revenge on all those who brought hardships to her life. She was torn between the love of two men: Miguel (Diether Ocampo) and Rafael (Gabby Concepcion).

In her interview with The Buzz on July 1, 2008, Claudine said about the series, "Ito na po, ibinibalik na namin yung drama sa primetime.

Claudine said that she got teary-eyed upon watching the series for the first time when it had a press preview on July 4, 2008.

Her love scenes with her leading men became a hot topic at the time.

In past interviews, Claudine admitted that she felt awkward doing an intimate scene with Diether, whom she worked with in Mula sa Puso, Saan Ka Man Naroroon, Buttercup, Marina, and Maligno.

Iisa Pa Lamang was also a big deal for fans of Gabby Concepcion, who staged his acting comeback after spending 13 years in the United States.

In the series, he played the kind-hearted Rafael Amadesto, Catherine's "kuya-kuyahan" who had secret feelings for her.

During the press preview, those who watched the pilot week questioned why Gabby's character did not have too much exposure on the show.

Direk Ruel Bayani explained back then:

When the series ended on November 7, 2008, Claudine's character ended up with Gabby's character.

When the teleserye Iisa Pa Lamang was still airing, there were already reports coming out that Claudine was bound to leave ABS-CBN's talent management arm, Star Magic.

In an interview with PEP.ph (Philippine Entertainment Portal) on September 30, 2008, Claudine revealed that she doesn't have an exisiting contract with the talent management company.

"Sabi ko, it's not naman na lilipat o ano. Kasi whatever happens, markado ka na talaga na parang Star Magic. And it's hard, kasi what we have is a relationship like a family."

Claudine continued to do the Iisa Pa Lamang teleserye until its finale on November 7, 2008, or after 17 weeks of airing.

She then did a one-week guest appearance in the prime-time series May Bukas Pa in early 2009.

In May 2009, Claudine opened up to the press about the possibility of doing a project with ABS-CBN.

She said, "You know, I'd love to. Actually... wala naman akong kontrata sa ABS-CBN and I'm per project.

At that time, she said that ABS-CBN remains to be her priority.

It was later announced that Claudine would be top-billing a teleserye called Magkapatid, where she will act alongside sister Gretchen Barretto.

It was supposed to be their reunion project after Gretchen did a guest appearance in the 2001 series Sa Dulo Ng Walang Hanggan.

In October 2009, Claudine surprised everyone with her decision to sign up with VIVA Films. When it came to her movies, Claudine was very much associated with Star Cinema, ABS-CBN's film arm.

This sparked speculations that ABS-CBN executives were unaware of Claudine's decision, and that her teleserye with Gretchen would not push through.

However, in separate interviews, both Claudine and Gretchen assured the public that the series will still happen.

Unfortunately, Claudine and Gretchen's project together did not push through.

It was in November 25, 2009 that Claudine signed a contract with GMA-7, ABS-CBN's rival network.

Many were surprised by Claudine's decision, especially since she started her career with ABS-CBN in 1992 and stayed there for 17 years before her transfer.

In 2012, GMA-7 did not renew Claudine's contract anymore, and the actress temporarily took a break from acting.

Claudine also did an episode of Maalaala Mo Kaya, which served as her comeback to ABS-CBN after six years.

On that same year, Gabby transferred to GMA-7 after six years with ABS-CBN. He was able to do the shows Because of You and Ika-6 Na Utos, which all registered high ratings and earned several extensions.

In 2016, Claudine did a project for VIVA and TV5: the drama series Bakit Manipis Ang Ulap?

She returned to ABS-CBN in December 2016 for a guest appearance in Maalaala Mo Kaya. After that, Claudine took a break from acting again.

In early 2019, Claudine announced through an Instagram Live session with sister Gretchen that she will make her acting comeback on ABS-CBN.

She has already appeared in an episode of Maalaala Mo Kaya with Jameson Blake.

Currently, Claudine is preparing for her reunion movie with Piolo Pascual to be directed by Cathy Garcia-Molina.