ON THIS DAY 12 years ago: Angel Locsin transfers to ABS-CBN after being with GMA-7 for five years 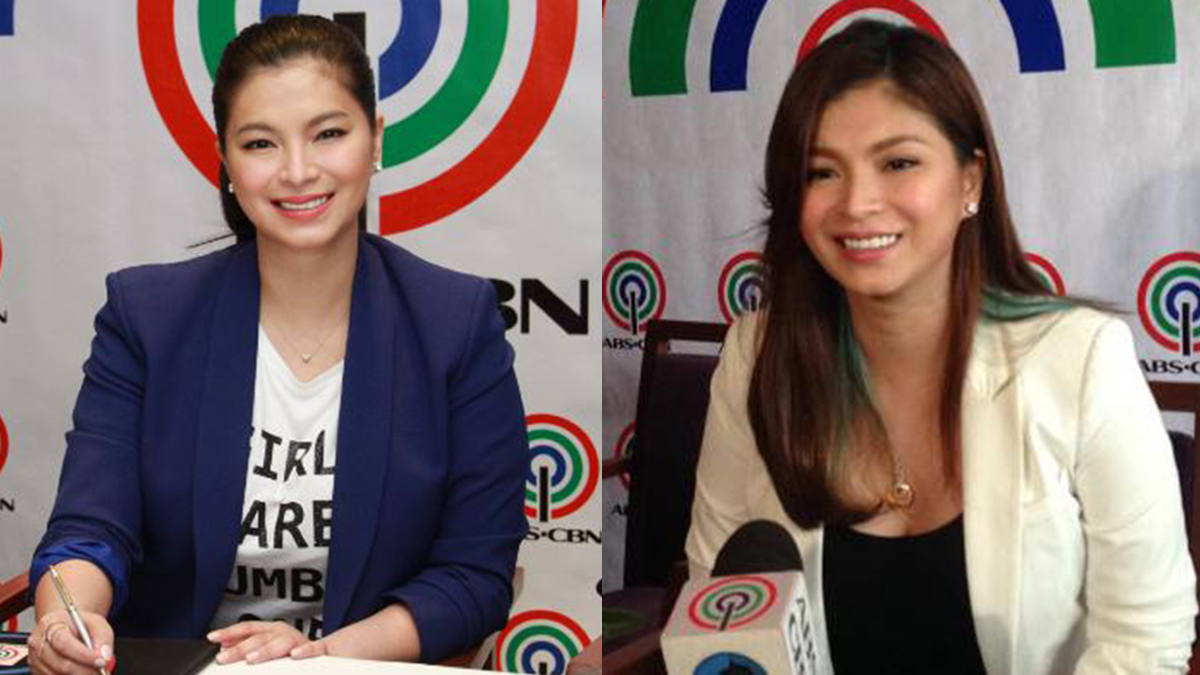 ON THIS DAY 12 YEARS AGO: Angel Locsin inked her first ABS-CBN contract, after being GMA-7's prime star for almost five years.
PHOTO/S: ABS-CBN

It has been 12 years since Angel Locsin did her controversial transfer to ABS-CBN, after being GMA-7's prime actress for more than five years.

Long before she became a GMA-7 talent, Angel already auditioned to be part of ABS-CBN's Star Circle batches.

After not being chosen by ABS-CBN, Angel eventually joined the Kapuso network and became part of the Kapuso youth-oriented show, Click.

In 2004, Angel got her big break in showbiz when she portrayed the humanoid bird Alwina in the fantasy series Mulawin, with Richard Gutierrez.

She was then awarded the role of Darna in the network's 2005 incarnation. With the show's impressive ratings, Angel became the Kapuso network's prime actress.

However, in 2007, Angel's relationship with GMA-7 became tumultuous.

In her new home, Angel was able to do drama and fantasy shows such as Lobo, The Legal Wife, and her ongoing drama series The General's Daughter.

As Angel celebrates her 12th year in ABS-CBN today, PEP.ph (Philippine Entertainment Portal) looks back on the moments that led to her ABS-CBN journey. 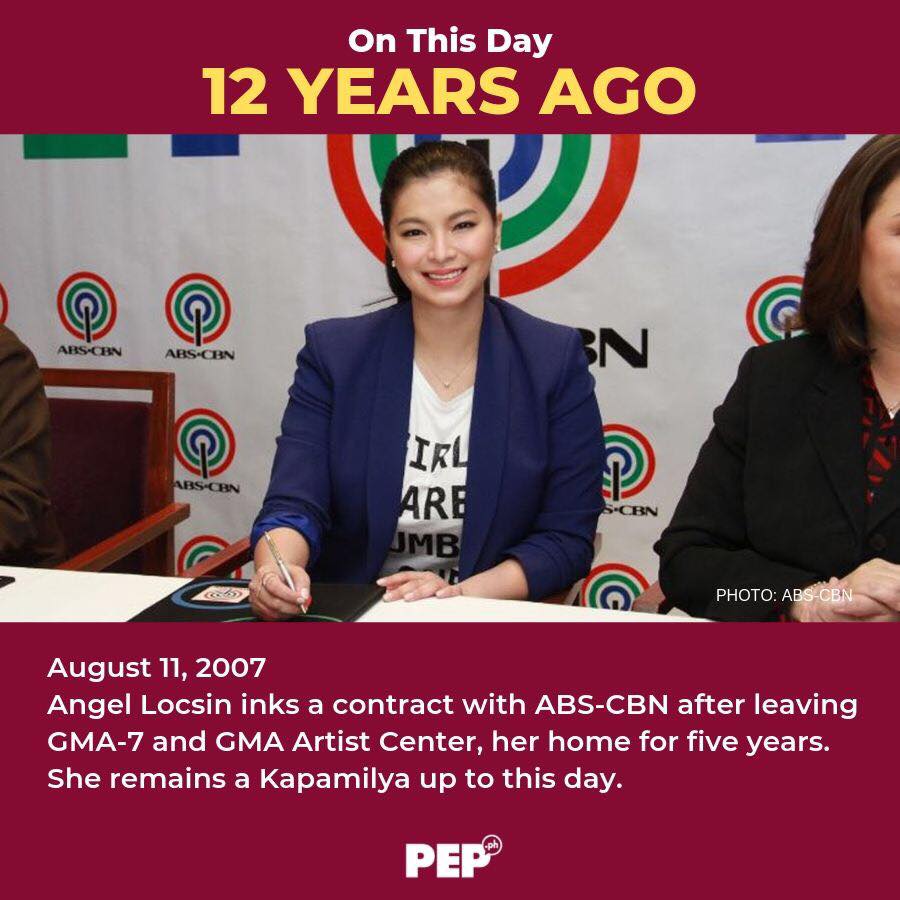 ANGEL LOCSIN AND THE MARIMAR PROJECT

Things started to get shaky between Angel Locsin and GMA-7 because of the network's much-anticipated remake of MariMar. This Mexican telenovela, which starred Thalia, was aired in the Philippines in 1996.

Being the network's prime actress at that time, people were expecting Angel to top-bill the project.

In an interview, which was published on PEP.ph on May 14, 2007, Angel was asked about starring in MariMar.

Though Angel has already heard of the project, she was a bit reluctant to do the role. She explained, "Hindi ko yata kayang gawin 'yon. Di ba, madalas magsayaw si Thalia doon? Hindi ako marunong magsayaw."

On June 8, 2007, it was reported that Angel had already turned down the project.

Her manager back then, Becky Aguila, explained that Angel already had other commitments until August, and MariMar already had its timetable and airing date.

However, a GMA-7 insider told PEP.ph on that same day that the MariMar project had yet to be formally offered to Angel.

Eventually, the role of MariMar Perez went to Marian Rivera, and Angel proceeded with her plans to study fashion design abroad.

At the time of the MariMar fiasco, Angel's contract with GMA Artist Center expired, and rumors had it that she and Becky decided not to renew her contract.

Becky denied this, but said that because of the issues coming out, she was thinking of making it happen.

On July 5, 2007, a source confirmed to PEP.ph that negotiations were ongoing between Angel's camp and ABS-CBN.

However, the source said that Angel's transfer might not happen, since walking papers from GMA-7 needed to be presented.

A July 5, 2007 article stated that Angel was offered to do a Kapamilya project called Daddy's Angel with Christopher de Leon, or a teleserye with Piolo Pascual.

In the same report, another source said that Becky already met up with the Kapuso network, but did not give any details about the meeting.

On the night of July 5, PEP.ph was able to speak with Becky, and she said that they were patching things up with the Kapuso network.

She also did not hear any Daddy's Angel teleserye offer from ABS-CBN.

Another report claimed that Angel's camp never did negotiations with ABS-CBN, which is why it was impossible for the Kapamilya network to look for Angel's release papers from GMA-7.

More stories and sources came out, neither confirming nor denying Angel's impending transfer to ABS-CBN.

On July 17, Becky confirmed that Angel is officially a freelancer. Angel's contract with GMA-7 expired on March 31, 2007.

On July 20, Becky finally confirmed that Angel would be officially transferring to ABS-CBN once she returns from London.

According to Becky, she offered Angel's services to ABS-CBN.

Becky also had an interview with ABS-CBN's talk show The Buzz, aired on July 22, where she talked about the issues surrounding Angel.

Becky said that it was a "painful decision" to leave GMA-7.

On the same day, on July 23, over GMA-7's talk show Showbiz Central, former Senior Vice President for Entertainment Wilma Galvante voiced out her and the network's disappointment over Angel's transfer to ABS-CBN.

Her first project, according to the report, was Taong-Lobo with Piolo Pascual.

Even Angel's first ABS-CBN project was marred by intrigues.

First was the title change from Taong Lobo to La Loba Blanca.

Rumors had it that Becky did not want the Taong Lobo title because Angel might look like being a support character to Piolo.

Eventually, the TV show aired as Lobo. In this show, Angel played a human who would turn into a werewolf during a full moon.

Piolo, on the other hand, played a soldier who is tasked with the mission to kill Angel's tribe.

This was followed by a Star Cinema movie with Piolo Pascual shot in Australia. Titled Love Me Again, the movie was shown in January 15, 2009.

Angel then did her second ABS-CBN teleserye, the remake of the Korean drama Only You. Shot in Korea, this series showed Angel's character caught in a love triangle with Sam Milby and Diether Ocampo.

In 2010, Angel was supposed to do the series Kokey @ Ako with Vhong Navarro. However, she had to be pulled out of the show because she had to do her drama series with John Lloyd Cruz, the fantasy series Imortal.

She was also able to do a sitcom with Robin Padilla and Vhong Navarro titled Todamax in 2011. Her role was only intended to be a guest in the show, but her character was retained throughout its run until 2013.

In 2014, Angel returned to doing teleseryes via The Legal Wife, with Jericho Rosales and Maja Salvador. The series had mediocre ratings during the start of its run, but it eventually received impressive ratings in the middle of its run. The show also spawned viral memes and unforgettable scenes.

Angel also served as a judge in Pilipinas Got Talent seasons five and six.

In June 2014, ABS-CBN's film arm, announced that Angel Locsin was chosen to portray the lead actress in their version of Darna.

Angel even cried when she found out that ABS-CBN is entrusting her the role, which she already portrayed in a GMA-7 drama series.

Angel went on to train and work out for the role that required her to wear a sexy costume.

Unfortunately, on October 2015, ABS-CBN and Star Cinema announced that Angel would no longer do the role.

This was after she developed a disc bulge in her spine, and she needed to undergo rehabilitation and treatment for the disc bulge.

The project remained in limbo in the next few months, until certain clues pointed out that Angel might still be doing the project.

On September 2016, it was reported that former Star Cinema managing director Malou Santos, who was still the head at that time, said that Angel is still Darna.

However, on March 20, 2017, ABS-CBN announced that Angel could no longer do the role, after she experienced back pain twice.

Liza Soberano was chosen to play the new Darna, but she also had to back out due to an injury.

After five years of not doing teleseryes, on January 21, Angel Locsin returned to ABS-CBN prime-time slot via The General's Daughter.

On January 11, 2019, in an intimate interview with PEP.ph and other reporters, Angel revealed that she almost resigned from ABS-CBN and planned to quit showbiz.

She thought about this when she experienced challenging moments in her career and personal life.

However, ABS-CBN was able to convince Angel to stay via the project The General's Daughter.

She also did not think of leaving the Kapamilya network during her 12-year stay in the network.

During her solo press conference, which happened after her sit-down interview with PEP.ph and other reporters, Angel revealed that Darna was also the reason why it took a long time before she appeared in a teleserye.

Still, Angel had a guaranteed talent fee even though she did not do any teleserye during those five years.

Angel is also one of the ABS-CBN celebrities who slammed singer Jimmy Bondoc after his tirade against the Kapamilya network.

At present, Angel's ABS-CBN series The General's Daughter is still on the air. Unconfirmed reports say that her teleserye is bound to end in September 2019.

Angel is currently engaged to her boyfriend, Neil Arce.