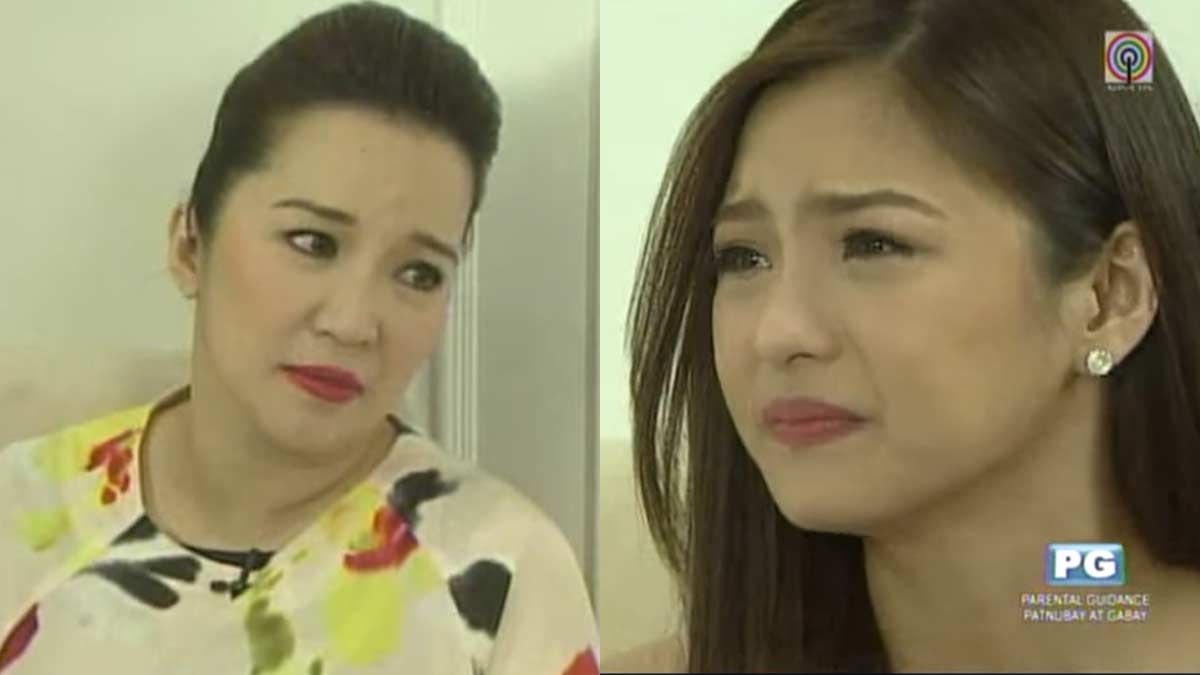 Kim Chiu's 2014 interview on Kris Aquino's defunct talk show Kris TV is resurrected on social media and trending now. It is described by one netizen as "Fill In The Blanks" because Kim was crying so hard she couldn't finish her answers to Kris's questions.
PHOTO/S: Kris TV (ABS-CBN)

Kris TV was the defunct morning talk show of Kris Aquino on ABS-CBN in which Kim occasionally appeared as a guest host.

A Facebook user named Rice posted a video clip of the interview showing Kim in tears and unable to finish her sentences.

Kim then paused and wiped her tears.

Kris then asked her to continue, "Kasi?"

Kim tried to regain her composure so she could complete her answer, but she kept pausing to wipe her tears that just seemed to flow uncontrollably.

The clip ended at that, but it continues to live on in social media.

The video currently has 47K reactions and 28K shares. The comments section was closed to public.

The video was posted on June 2, 2020, a few weeks after Kim made headlines because of her statements in two separate videos.

The first originated from Kim's controversial classroom quote last May 8, on the Facebook Live video of Kapamilya stars protesting the shutdown of the network.

Kim was bashed wholesale because of the quote that spread wildly like a contagion on social media.

It was even turned by netizens into songs parodying the message of Kim's quote.

Unperturbed by the brouhaha, Kim released her own song and music video titled "Bawal Lumabas."

She even released a "Bawal Lumabas" merchandise.

On May 26, 2020, Kim's quote from an interview with MJ Felipe also became a trending topic on social media.

Asked about the success of her "Bawal Lumabas" song, Kim said she was emboldened by a open letter of a fan, Adrian Crisanto, defending her against the bashers.

The viral interview was aired in January 2014, when the actress was promoting her movie with Xian Lim, Bride for Rent.

It was an emotionally charged interview for Kim, who started tearing up when Kris asked her about the support of her fans.

The interview was the culmination of a horrible week for Kim.

A week before the Kris TV interview aired, she was criticized by netizens for her answer to a question at a press conference of Bride for Rent.

Kim was asked by a reporter about the real score between her and Xian, and her answer was, "We don't owe you any of our personal lives."

Back then, Kim and Xian had not admitted their real-life relationship.

In the Kris TV interview, Kris asked Kim to give a message to her ever-loyal fans.

And then she began to cry.

But she was breaking down, tears flowing.

What happened next is in the video clip that is now going viral.

Seeing that Kim could not finish her sentences because of her tears, Kris explained what Kim wanted to say.

Kris and Kim's interview, which was uploaded on ABS-CBN News' Youtube channel, currently has 1.1 million views.