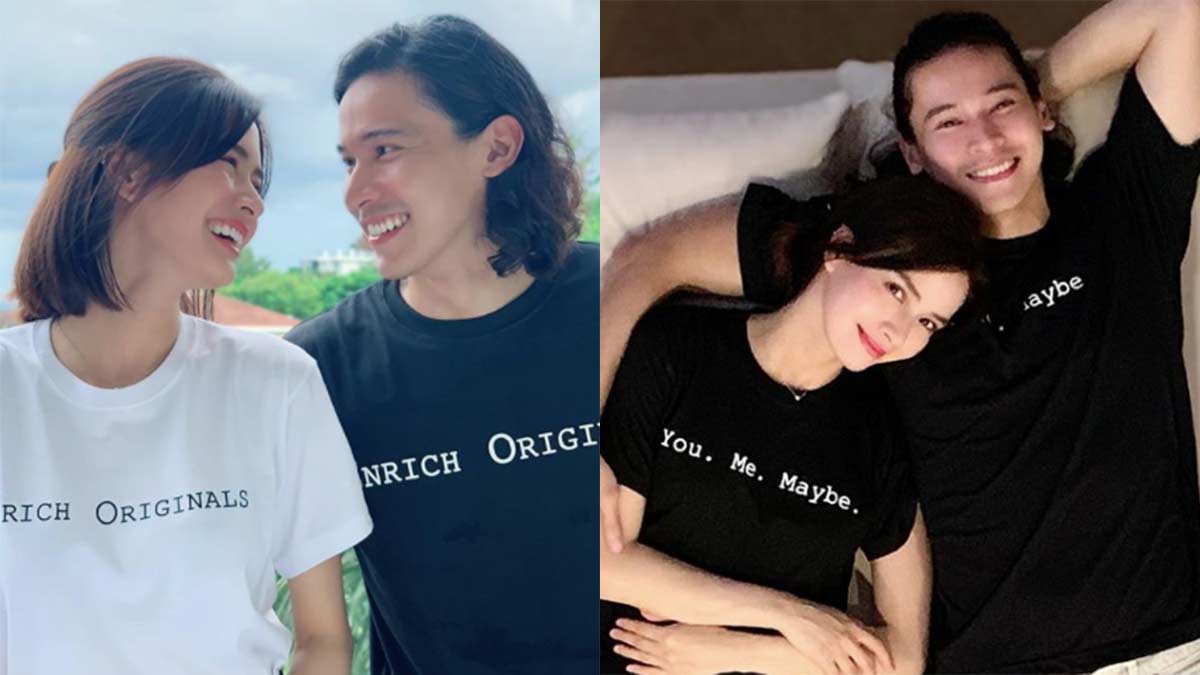 The love team of Erich Gonzales and Enchong Dee is set to reunite in a digital series they themselves are making.
PHOTO/S: @erichgg / @mrenchongdee on Instagram

Erich Gonzales and Enchong Dee have been spending time together during the quarantine to shoot the original content for their YouTube Channel, EnRich Originals.

Erich and Enchong have taken EnRich from the name of their fandom.

A love team beginning 2009 when they starred in the prime-time series Katorse, Erich and Enchong have since done at least 10 television and movie projects together.

They have each their own vlog before they put up their love-team channel, and after three vlog entries, they decided to create a digital series.

This is the first time for Enchong, a known entrepreneur apart from being an actor, to try his hand at producing a series.

This is the first time as well for Erich to direct a full-length series, although she has directed a music video in Singapore.

In a joint e-mail interview with PEP.ph (Philippine Entertainment Portal), Erich and Enchong revealed how their digital reunion project got its start.

They said the idea came from one of their closest friends who saw promise in their collaborations on each of their YouTube channels.

Erich and Enchong told PEP.ph, “It all started when we were shooting content for our own YouTube channels.

"We saw how our audience reacted to our videos.

“A close friend pitched the idea to us and we liked the concept.

"A week after, we brainstormed and decided what we can produce independently that can bring joy and positivity during these challenging times…

“And so, EnRich Originals came to life.”

ERICH AS DIRECTOR AND ENCHONG AS PRODUCER

According to Erich and Enchong, the whole team of EnRich Originals is involved in their channel’s content, which includes the vlogs, interviews, and the series.

Both actors have promoted their digital series on their Instagram accounts.

In the screenshot Noreen posted on Instagram, Erich and Enchong’s full names appear in the credits.

Erich's interest in filmmaking started with her first experience in 2019, when she directed the music video of Mario Maurer’s brother Marco in Thailand.

She recalled, “It all started last year when I directed Marco Maurer’s music video entitled ‘Won’t Let You Go,’ you can watch it on YouTube.

“I’ve been reading books about filmmaking and watching different series and movies.

“It has helped me a lot in this new journey that we are undertaking. I just wanted to try and continue to learn more.”

Meanwhile, Enchong said he has alway enjoyed collaborating with other people anyway, and so his first venture as a producer has been smooth so far.

“I applied that in our shoot requirements such as location, talent coordination, promo, and marketing. I also encourage the team to stay within our budget.”

You. Me. Maybe. is set to premiere on September 19 on their YouTube channel.

Erich and Enchong’s love team is now on its 11th year.

They first worked in the 2008 youth-oriented series Abt Ur Luv, Ur Lyf 2, but they were not yet a love team then.

In 2009, Erich headlined Katorse, the remake of Dina Bonnevie’s hit film about a 14-year-old barrio lass who got pregnant at an early age.

Originally planned to be a weekly series, Katorse was made into an afternoon series after ABS-CBN management saw its potential.

Apart from changing its time slot, the series had another revision.

The show's writers saw bigger possibility for a supporting character, the best friend of Ejay in the series.

The creative team developed it into a major character and tapped Enchong Dee to portray the role.

When the series premiered on August 24, 2009, in ABS-CBN’s early prime-time slot, viewers fell in love with Erich and Enchong’s team-up.

Both Erich and Enchong cheerfully informed PEP.ph that their friendship has grown through the years.

The love team explained, “We believe that honesty and respect really played a huge role in our growing friendship.

“We’ve always been so transparent to our audience from the very beginning.

“We always have this conscious effort not to play with our audience’s emotions that is why they’ve stuck with us no matter what.

“It’s very clear to us that we are here for the long haul and it will only happen if authenticity exists.”

More than anything, they are happy that the EnRich fans have remained active after 11 years, and have made their YouTube channel happen.

They intoned, “We are incredibly happy and grateful. They are actually the biggest contributor to EnRich Originals channel.

“We heard the clamor and support that is why we are here.”

Apart from catering to their fans, Erich and Enchong said that their channel’s purpose is to spread positivity and make their viewers smile.

“We want to encourage people to smile when they go on the internet. We love to see people laugh.

“We are actually huge fans of good energy and positivity. That is our promise to everybody that will tune in to our channel.”