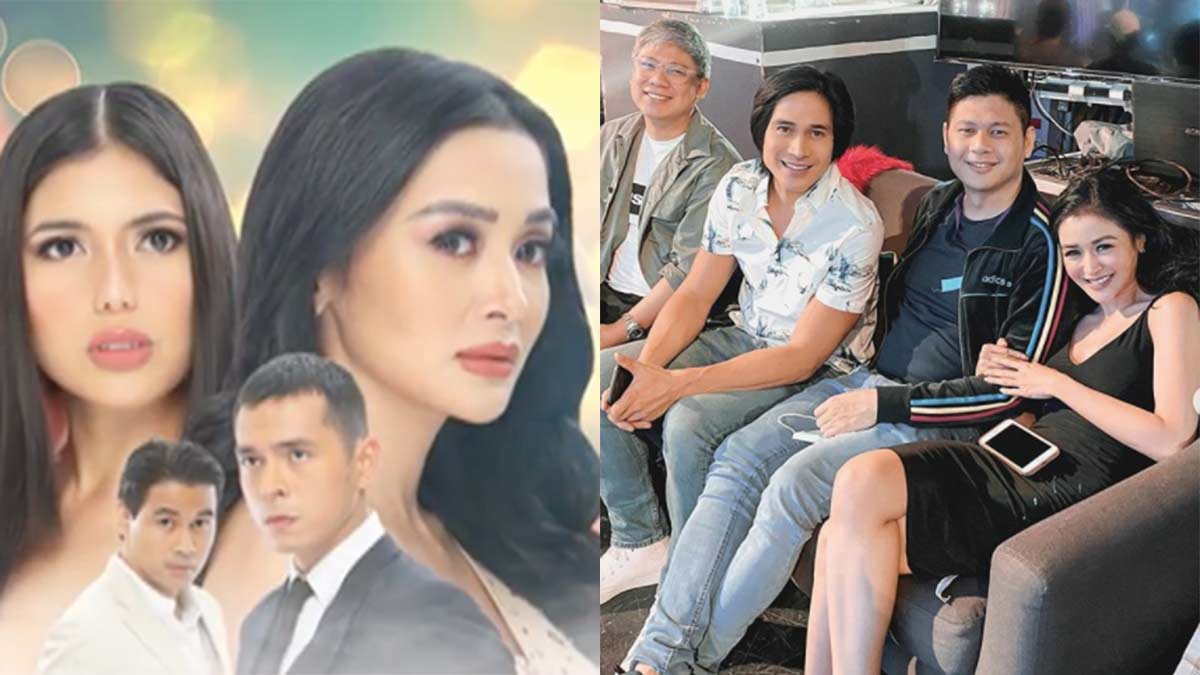 Former GMA-7 actress Kris Bernal will be seen in a TV5 show titled Ate ng Ate Ko with Isabelle de Leon, Joem Bascon, and Jake Cuenca (left frame). She will also do a guest appearance on Sunday Noontime Live, where she had this shot taken (right frame) with the show's host Piolo Pascual together with its line producers Erickson Raymundo (in gray jacket) and Jeff Vadillo (in black jacket) of Cornerstone Entertainment
PHOTO/S: TV5 / @krisbernal on Instagram

Her co-stars in the TV5 show are Isabelle de Leon, Joem Bascon, and Jake Cuenca—who are identified with ABS-CBN.

It showed Kris and Isabelle’s characters calling each other “ate.”

Ate ng Ate Ko will premiere on November 23, and will be shown every Monday at 9:30 p.m.

Ate ng Ate Ko is Kris’s first regular project outside GMA-7 after her management contract with GMA Artist Center expired during the quarantine.

Kris revealed in her vlog that GMA-7 did not offer to renew her contract, and she has been scouting around for a talent manager since then.

Kris was also set to appear on TV5’s noontime variety show, Sunday Noontime Live (SNL), which was supposed to air on November 15.

But a technical glitch caused the cancellation of the show's live episode.

Prior to her live appearance, Kris was posting behind-the-scene photos of her rehearsals for the show.

One was an Instagram post with SNL main host Piolo Pascual and the bosses of Cornerstone Entertainment, Erickson Raymundo and Jeff Vadillo.

Cornerstone Entertainment, through its production arm CS TV, is the line producer of SNL. Brightlight Productions of Albee Benitez is the producer.

Kris wrote in her Instagram post on November 14, “In unfamiliar territory making friends. And, staying neutral, holding my breath, with Papa P around.”

Kris had been an exclusive talent of GMA-7 since 2006.

She started in StarStruck: The Next Level, where she won the Ultimate Love Team title with Mart Escudero.

However, their team-up did not flourish after their win as Kris was paired in several projects with her batch’s Ultimate Hunk, Aljur Abrenica.

In 2016, Kris was rumored to have transferred to another network and management, but she remained with GMA-7.

She then top-billed the afternoon series Impostora, which had an original 13-week run but was extended to eight months after it registered high ratings in its timeslot. It aired in 2017.

In September 2020, Kris appeared in an episode of TV5’s talk show, Chika, BESH!

In her YouTube vlog titled Back to work… in TV5 Network? | BTS and the TRUTH, Kris revealed that she is currently a freelancer after the expiration of her contract.

She also said that GMA-7 did not renew her contract.

Even then, she continued to do guest appearances in GMA-7 shows All-Out Sundays and Wish Ko Lang!