(UPDATED) How did #ALDubEBTamangPanahon and #ShowtimeAnimversary fare in ratings game? 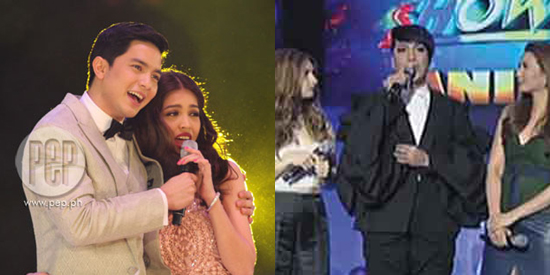 GMA Network’s Eat Bulaga! held a grand fans day called Tamang Panahon at the Philippine Arena while ABS-CBN’s It’s Showtime celebrated its sixth anniversary with the awarding of the annual "Magpasikat” competition among the hosts.

The AlDub Nation filled the arena, which has a capacity of 55,000.

At the start of the program, Lola Nidora (Wally Bayola) announced that ticket sales reached P14 million. This amount will be used in building libraries for schools in provinces nationwide.

Various performances from the characters of the Kalyeserye – including The De Explorer sisters (Wally, Paolo Ballesteros, Jose Manalo) – and the hosts of Eat Bulaga! were presented before the meet-up of Alden and Yaya Dub.

The highlight of the event was the meet-up of Alden and Yaya Dub. Alden entered the arena bringing flowers and the glass shoe that Yaya Dub left behind at the Broadway Centrum.

Alden sang “God Gave Me You” and even put the microphone near Maine so that she can sing a portion of the song.

When the two exchanged messages, Alden and Maine told each other “God Gave Me You.”

Read: Alden Richards and Maine Mendoza tell each other: “God gave me you.”

At one point, Alden even tried to kiss Maine but she stopped him by putting her finger to his lips.

Read: Alden Richards tried to kiss Yaya Dub and other highlights of #ALDubEBTamangPanahon

The three-hour show with no commercial interruptions also earned at least 39.5 million tweets for the hashtag #ALDubEBTamangPanahon, breaking the record of the hashtag #WorldCup match between Germany and Brazil last year.

Read: #ALDubEBTamangPanahon breaks #WorldCup record for most number of tweets

SHOWTIME ANIMVERSARY. On the other hand, the episode of It’s Showtime last Saturday served as the culmination of the noontime show’s sixth anniversary.

One of the highlights of the episode was the announcement of the winners of the “Magpasikat Week” 2015 segment where the hosts of the program showcase their talents and vie to be the champion.

This year, it was the Team TVJ composed of Teddy Corpuz, Vice Ganda and Jugs Jugueta who emerged as the champion, and took home P 500,000 that will go to their chosen charity.

This was after their October 21 performance where they featured optical illusions that impressed the audience and the hurados Bangky, Amy Perez and Marc Logan.

Meanwhile, the duo of Karylle and Jhong Hilario placed second while the team of Anne Curtis, Kuya Kim Atienza and Eruption (Eric Tai) placed third in the contest.

The duos of Vhong Navarro and Ryan Bang, and Coleen Garcia and Billy Crawford were the other competing teams in “Magpasikat Week.”

But the greatest highlight of the episode was when Vice Ganda aired his opinion regarding the on-going competition between their show and Eat Bulaga!.

He also said that they cannot compete and that they accept defeat against the 36-year old noontime show.

MEGA MANILA RATINGS. According to AGB Nielsen, Eat Bulaga! again emerged as the most-watched program last Saturday, October 24. The episode that used the hashtag #AlDubEBTamangPanahon got a TV rating of 50.8%.

On the other hand, It's Showtime, which used the hashtag #ShowtimeAnimversary, registered a TV rating of 5.4% in Mega Manila.

This represents a 45-point gap between the two noontime shows.

NATIONWIDE RATINGS. According to Kantar Media-TNS, Eat Bulaga was able to get four times the rating of It's Showtime on October 24, 2015.

Eat Bulaga topped the ratings chart that day with its national TV rating of 40.1%.

Meanwhile, It’s Showtime, which featured the culmination of the hosts' Magpasikat contest, got a TV rating of 10.2%. It failed to enter the Top 20 most-watched programs last Saturday.