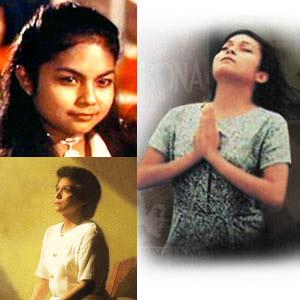 The fans' manic love for Nora Aunor goes beyond the rags-to-riches drama of this poor little girl from Iriga who used to sell water in a train station. It goes beyond her "pakilig" reel and real love story with Tirso Cruz III. Nora is a natural artist. A gifted singer, a born thespian, a creature made for show business. That's why even the critics love her. Alberto Florentino, author of The World Is an Apple, refers to Nora Aunor as "t

This is the last of the three-part series on the urban legends connected to the Superstar Nora Aunor.

We have proven in the first part of this series that the urban legend about Nora Aunor's "fling" with then Hollywood newcomer Don Johnson was not true. This was made clear to us by Nestor de Guzman, editor of the Noranian book Si Nora Aunor Sa Mga Noranian: Mga Paggunita at Pagtatapat (Milflores Publishing, first printed in 2005, Php 360), a compilation of stories from Nora fans. De Guzman revealed that another Hollywood-based star fell for Ate Guy, the ‘60s Indian teen sensation Sajid Khan, Nora's partner in the movie The Singing Filipina (1971).

The second urban legend, proven to be fact this time, was the story of Nora's "Operation: Kumbento" and the Lucky 12. Again with the help of de Guzman, an account from La Aunor's 1970s biographer Rustum Quinton, and from Tirso Cruz III's publicist from 1970-80 Nora Calderon, we found out that Operation: Kumbento was the codename for Nora's "extraction" operation from Tower Productions with the help of the Lucky 12-a group made up of die-hard Noranians assembled by Nora's close friend, the late showbiz writer-radio and TV host Inday Badiday.

Were the stories of mass hysteria, of fans willing to get trampled on, risking life and limb just to see Nora, and their god-like adoration of the little brown girl from Iriga really true?

What about the stories of buses, firetrucks, cranes, and even a helicopter just to get La Aunor through a sea of screaming fans? Of using look-alikes to divert chasing fans from the Superstar?

Are all these just the usual publicity gimmicks, tall stories from publicists and reporter fans of the Superstar? Which is fact, which is fiction?

IN THE BEGINNING. The hysteria began after Nora capped her 14-week undefeated streak with a grand championship win in Tawag ng Tanghalan in 1967. Fans followed and loved her when she started singing in the TV show Oras ng Ligaya and in the radio program Operatang Putul-putol.

Although her first recording flopped, her next LPs were certified hits and runaway bestsellers. Movies came next with her supporting appearances in musical portions of Sampaguita Pictures movies.

But it was the movie D'Musical Teenage Idols of Tower Productions that further fanned the flame of Nora's popularity. This movie—her first starring role—was a surprise box-office hit.

Nora broke through the "mestizas-only" rule of local cinema and proved to everyone that you don't have to be Caucasian-looking to carry a film and make it a box-office hit. Her next movies' record-breaking ticket sales only cemented more solidly her place in Philippine showbiz. The media quickly took notice of the phenomenon Nora was creating and gave her a title—The Superstar.

THE FRENZY. It was the late ‘60s and Filipinos were entering one of the most tumultuous eras in Philippine history. Enter the 4'11", brown-skinned girl from Iriga. Gifted with a golden voice and a pair of soulful eyes, she also had a Cinderella story that could inspire, fan the imagination, and take away all the worries of the problem-burdened Pinoys. Nora Aunor provided an escape, someone everyone could focus on and channel their faith unto during those troubled times.

De Guzman said there were only two reasons when one saw a very large group of people rallying on the streets in the early ‘70s. Either there was a student demonstration going on, or Nora's hordes of fans were off to see the premiere of her latest movie.

This corroborates what Inday "Ate Luds" Badiday said in her interview with Gina Abuyuan-Llanes for the Daily Tribune in 2001. She related how she, Guy and Pip were herded into a man-sized safe (as large as the ones used in banks), in order to keep from being mobbed by the fans during movie premieres. A crane would carry the safe and deposit them safely at the back entrance.

Ate Luds was a very close friend of the Superstar and was often part of Nora's entourage. In that Daily Tribune interview, Ate Luds shared how one movie Nora was doing was put on hold because of excited fans out to get a glimpse and an autograph of Guy. The solution? "Nagkunwaring tulog siya. Ayun, para siyang santo," related Ate Luds. Fans formed kilometric lines waiting for their turn to look at their slumbering salvation, and touch her.

One more story of how Nora's fans adored her was that of her former PR Baby K. Jimenez's story as told to acclaimed fictionist and essayist Gilda Cordero-Fernando and published in the book Pinoy Pop Culture.

"One late morning," relates Jimenez, "we woke up ahead of Nora. There were many fans in the house and still a long row of cars outside. Pitying them for having travelled so far, Nora's mamay decided to allow the fans to take a peep, single file, of Guy sleeping. It was a hair-raising scene. One by one they came in, touched the sleeping Cinderella lightly, as if she were a saint, wiped her face with their handkerchief and made a quick exit while kissing the hanky they had pressed on their idol."

Patrick D. Flores, University of the Philippines professor and National Museum of the Philippines Arts Division Curator, wrote his thesis on the popularity of Nora Aunor. His report on how fans worshipped Nora was also mentioned by Cordero-Fernando in Pinoy Pop Culture.

"Fans placed her picture beside Jesus Christ or Mary and put leis of jasmine around it," writes Flores. "Others die embracing Nora's picture, requesting it to be buried with them."

Ate Luds swore the picture story was true. There was this fan, she said, who wished to be covered with Nora photos when he died. Ate Luds herself laid eyes on the corpse—peaceful in his coffin, plastered with Nora's photos from head to foot.

But perhaps the most popular recorded incident of Nora-fanaticism was during her 18th birthday in 1971. It was covered by major publications, radio and TV.

Nora had been hiding inside the Sampaguita Pictures compound after escaping from Tower Productions. It was like Noranians from every part of the country were there to greet Nora on her debut. A sea of humanity stretched from the Sampaguita-Vera Perez compound gates on Gilmore St. to the Quezon City Stadium (now Amoranto Stadium), awaiting the appearance of their Superstar.

It was the morning of May 21, 1971, a motorcade came out of the Sampaguita compound. Fans were screaming and pushing just to see and greet Nora.

Nora waved at all her fans from the studio gates to the stadium, then back to the Vera-Perez compound where Nora's debut party was held at the compound's garden. Nora's biographer Rustum Quinton wrote that a firetruck was used afterwards to disperse the crowd waiting for Nora.

For Robin, Nora's helicopter story was the gauge for a star being really "sikat na sikat na."

Inday Badiday, in an article for a broadsheet in 1999, wrote how the love team Guy and Pip had to be lifted by helicopter just to go through a very large crowd.

But what seemed to be the height of the fans' craziness in everything about Nora was when Guy and Pip could not attend a parade for their movie to be shown in Cebu. Their entourage instead sent something good enough for the fans in lieu of the couple—their "daughter" Maria Leonora Teresa, the doll given by Pip as the symbol of his love to Guy.

"Ay, saan ka nakakita ng mga taong nahihimatay, nagsisigawan dahil sa manyika?" again Ate Luds shared this story in her Daily Tribune interview. She described how the crowds wailed and screamed when the doll raised her arm, as if in salutation.

THE PERFECT ARTIST. The fans' manic love for Nora goes beyond the rags-to-riches drama of this poor little girl from Iriga who used to sell water in a train station. It goes beyond her "pakilig" reel and real love story with Pip. Nora Aunor is a natural artist. A gifted singer, a born thespian, a creature made for show business.

That's why even the critics love her. Alberto Florentino, author of The World Is an Apple, refers to Nora Aunor as "the greatest Filipino actor, of either gender, whether living in the Philippines or abroad—barring no one—either on film, on video, on radio, or on stage."

Her co-artists hold her in high esteem, like national artist Lamberto Avellana who calls Nora, "A perfect film actress." He reasons, "Perfect because in a film, since cameras can do extreme close-ups, the littlest of nuances count a lot. And Nora can do just that. She can show pain, sorrow, ecstasy, fun with just the eyes."

And the people, the masses, they really identify with Nora. When she came, they instantly knew they didn't need to aspire for something or someone foreign or high class. Here was Nora, one of their own, who dreamed and rose from poverty. Nora made them feel there is hope for anyone who dreams big and does something about it.

As for the love her fans give her, she reciprocates by being there when they reach out. Although she was always pulled away by her people to keep her from harm, she made sure they could always touch, hug and talk to her.

Years have passed since the phenomenon and the hysteria has died down. But the loyalty, love and respect are still there for the Superstar—four decades since her golden voice first filled the air.

As for those who don‘t care about her contributions to Philippine show business or who think they're the biggest thing happening before the cameras right now, look back and think again—where's your helicopter?