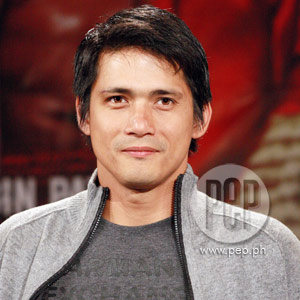 Robin Padilla does his own stunts and has been in many near-death accidents. One of those accidents happened back in 1992 when he ran through walls of fire in a scene for his movie Miss Na Miss Kita: Ang Utol Kong Hoodlum 2. Robin is just one of the few tough celebrities who still gets going even after an accident.

We love them for their talent and good looks, but a star's job is not all glitz and glamour, it's a tough one, too. Accidents happen while shooting a movie or taping a TV show. Missteps happen in a supposed well-rehearsed fast-dance number. Stunts can go wrong. Our idols also get hurt. That's when you see how tough our stars are.

Take what happened to Robin Padilla back in 1992, during the filming of his movie Miss na Miss Kita: Ang Utol Kong Hoodlum 2. Daring Robin's arms got burned while running through walls of fire from blasting caps. Somewhere along his stunt, someone miscalculated and the result was a burned Binoe who now has arms marked with keloids, dark reminders of that unfortunate incident and part of Robin's collection of "medals" (scars and stitchmarks) from his daredevil ways. As philosopher Friedrich Nietzche said, "That which does not kill us makes us stronger," the former Bad Boy of Philippine Cinema still did (and does) his own stunts in his movies and TV series.

Other stars may not be as bold as Robin, but they're no less tough after experiencing accidents and injuries. PEP (Philippine Entertainment Portal) talked to some of them and learned why they should be on PEP's celebrity "Tough List." Celebs who met accidents while working come first, followed by stars who got their injuries from sports, from vehicular accidents and from childhood.

He underwent operation on April 1 and had a wire installed in his knee to augment the damaged ligament. He is now on his way to recovery through therapy sessions.

PAULEEN LUNA. "Oh, normal sa 'kin ang injuries, ha-ha-ha. Marami-rami na kasi, The worst one was like three years ago in the set of Encantadia. We were doing a scene na nagso-sword fight. Ayun, natuluyan, my ring finger got sliced in half vertically. Lesson learned? Easy lang sa stunts. Ha-ha-ha. I'm so lucky my nail grew back!"

CHYNNA ORTALEZA. Hurt her ankle while dancing in SOP. "My ankle is better now, but I still have to take care of it. I can't wear high heels for a long time and I still have to take it to a therapist para bumalik sa dati. Thank God that this is my only injury and it's just a minor sprain. I'm still lucky!

"What did i learn from it? To take extra care of myself especially when I am dancing. I have to make sure that I wear the proper footwear as well. No high heels for me while dancing from now on. Plus I also learned to value basic things in life that you take for granted when you are normal. Lastly, accidents are unpredictable and may happen anytime so you have to be careful at all times."

"It happened last January at Hard Rock Cafe in Makati. The Mocha girls were performing that Thursday night. It was packed and the people were in the party mood. We invited four people from the audience to dance with us on the stage. We were dancing by partners. Hershey was dancing with a big foreigner guy. The guy was so energetic and happy dancing with Hershey he accidentally hit her right eye with his elbow. She was in shock! Actually all of us girls were in shock when we saw blood streaming down her face! She had a big lesion/cut on her right eye near the brow bone. We immediately rushed her to Makati Medical Center Emergency Room where she had undergone three stitches. Hershey is doing better now though the wound left a small scar on her beautiful face.

"We've all learned some very important lessons from this accident. First, health insurance is a must for every artist. Second, we always have to be alert and cautious while performing on stage so we can avoid these kinds of accidents."

TV networks and a few movie studios, particularly the big movie productions, usually provide insurance or take care of the hospitalization needs of their artists who get involved in accidents while working.

"We insure our cast, staff and crew in our soaps," says GMA-7's Program Manager for Entertainment Redgie Magno-Acuna. "This has provision in our budget." When Robin was hurt in a motorcyle accident during his Joaquin Bordado taping, GMA paid the bill for his medical expenses. "GMA lahat ang nagbayad," attests Robin's manager Betchay Vidanes.

Jan stayed in the hospital recuperating from second degree burns for three weeks. He's now back to work in Showbiz Central and already finished a TV series.

DEREK RAMSAY. Injured one of his knees during a game he participated in years back. Last year he injured his other knee in an ultimate Frisbee tournament (click here). "My right knee is in desperate need of surgery. Ngayon nga, nararamdaman ko na, both knees are already affected. My left leg, may fractured bone naman. Hindi ko nga lang alam kung paano ako nakakapaglaro at kapag naglalaro ako, walang sakit." Although Derek has been planning to get both of his knees operated on, workload prevents him from undergoing operation for now.

EULA VALDES. Had a torn ligament in one of her knees from a game she did back in college. "Hindi ko iniinda. Pero as the years went by, siyempre, with age na rin, nararamdaman ko na siya talaga." She had her knee operated on in 2006 and had titanium plates inserted. But despite the operation, Eula still enjoys doing extreme sports. "I do those kasi life is too short and ang age...age lang yan, e. I don't believe na dahil 40 ka na you should act your age. Marami ka pang puwedeng gawin." (click here)

JEFFREY HIDALGO. "Yup, wrist injury. I got it last year from my mixed martial arts [MMA] training when my left arm got arm-barred. I actually still have it that's why I don't train anymore. I actually need to get it checked coz it's been a year na and it still hurts when I lift weights."

JAY-R. "I've injured my ankles, fingers and toes playing basketball many times. All I do is just ice them and stay off [basketball]. The more I stay off it the faster it heals so I can get back to playing again."

"So what I learned is don't play any sport before a show. Do it after. Kasi it's your responsibility to take care of yourself."