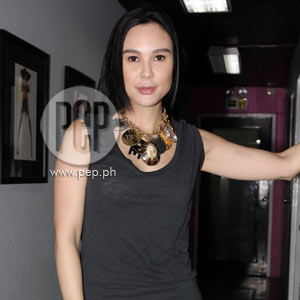 Gretchen Barretto felt relieved after Angelica Panganiban apologized to her on The Buzz last Sunday, August 8. She welcomed the girlfriend of her co-actor Derek Ramsay as her new friend. Gretchen further said, "I will give her red stilettos. Now that she's my friend, we'll go to war together! We will fight for each other."

"Of course, with all my heart!" Gretchen Barretto replied when PEP (Philippine Entertainment Portal) and other invited media asked if she has accepted Angelica Panganiban's apology.

It can be recalled that the two Kapamilya actresses had an exchange of intriguing statements over Derek Ramsay, Angelica's boyfriend. Gretchen made naughty statements about her Magkaribal leading man, to which Angelica answered by posting a controversial message on her Twitter account. (CLICK HERE to read related article.)

Gretchen said she wasn't able to watch Angelica's interview since she is still experiencing jetlag after she arrived from Paris last Saturday, August 7. However, she checked it on the Internet before she faced the media during a visit on the Magkaribal set earlier today, August 9, in Makati City.

What was her reaction after watching Angelica's interview?

"Ang unang dating sa akin, relieved ako talaga," Gretchen replied. "I'm very, very happy and I consider this a blessing. I am really thankful to God. For me kasi, parang puro blessings ngayon. It's not only that I have this project Magkaribal, but I have Derek as a good friend. And not only Derek, but now I have Angelica."

The actress also mentioned how she admires the former child star for her public gesture.

She said, "You know, I respect Angelica more now simply because iba 'yong matapang ka lang in fighting for your right. Iba when you can own up to your reactions or to whatever you think na, 'Ooops, nagkamali pala ako.' So now, I see the real beauty of Angelica—not only physically but nakikita ko 'yong strength of her character. And I respect her with all my heart. And I love her already."

Gretchen responded to this by saying, "It's never too late. It's certainly not too late."

She said that she too wants friendship with Angelica. "I am also just so willing to be her friend. I said nga in my past interview with Boy Abunda, 'You know, it's really not time for war It's really time for peace, especially now na parang ang dami-daming blessings. Who wants war really?'"

Although Gretchen already sent a message to Angelica through Derek, she still wants to meet the 23-year-old actress. "Siyempre, mas gusto ko na magkita kami in person and to really talk about things," she said.

The actress-model also did not think twice when asked if she would be willing to work with Angelica in the future.

"Why not? I'm open to anything," replied Gretchen. "I'm open to being not just a friend, but a very good friend to her and to Derek. So, I don't know. I mean, that's fun, masarap isipin 'yon."

THANKING COMMON FRIENDS. Gretchen also acknowledged the help of her and Angelica's mutual friends in solving the issue between them.

"So, noong narinig ko 'yon kagabi, I was really so happy. Noong napanood ko kanina [Angelica's interview], sabi ko, 'Oh, my God, this is really a blessing.' It's so nice kasi kakabalik ko lang. It's so nice that I know I'm gonna have a good friend."

Gretchen also pointed out the important role of Derek in bridging the gap between her and Angelica.

She added, "Thankful talaga ako because I was also worried for a while na baka ma-affect din ang friendship namin ni Derek. And like I said, I'm just so really thankful to be in this business and to have friends. I'm here in the business to also make friends and ayaw ko ng enemy. You know, life is too short for anything that's negative. I only like positive things to come into my life so I want everything positive around me."

"I'M JUST HAVING FUN." Gretchen related that after her "playful remark" about Derek, the ABS-CBN management reminded her to avoid getting involved in an issue against a fellow Kapamilya.

Gretchen said that she really wants to change her attitude.

"I don't know if I can totally change," she said. "But one thing's for sure, gusto kong magbago for the better. Hindi naman puwedeng habang tumatanda tayo, paurong tayo nang paurong. I forget na, 'Oh, my gosh, I'm really older now.' Ang daming nagsasabi—sinermunan ako ni Marjorie [Barretto, her sister], even Tony [Cojuangco, her partner], and my brothers, 'Oh my gosh, will you stop it?' I said, 'I'm just having fun.' [They said], 'Yeah, but it was done in bad taste.'

"So, you know, I pay the price. Sorry to say, but I really pay the price dahil everybody, siyempre, sinermunan ako na, 'Will you please grow up?' But I'm having fun, can I take my time? (Laughs)."

Now that the controversy between her and Angelica has been resolved, Gretchen wants to move on and live a more positive life.