LJ Moreno and husband Jimmy Alapag get ready for their growing family. Jimmy also shares plans about his basketball career.

LJ Moreno and Jimmy Alapag got married in 2010 and have been trying to have a baby since.

The goods news came in February this year, when LJ found out she was pregnant.

CHALLENGES. “We have been trying to have a baby since 2010. We even had ourselves checked out, but the doctor said wala namang problem sa aming dalawa. Mas nakaka-frustrate kasi parang walang problema,” she added.

They tried to adopt a baby girl in the past but were not successful.

Their attempts to adopt seem to be more successful this year. LJ and Albert are waiting to adopt a two-year-old boy. They received the news on or around the same time they found out LJ was pregnant.

LJ revealed the full story to PEP.ph (Philippine Entertainment Portal) in a baby shower for her two children at The Farm, Bonifacio Global City last October 9.

ADOPTION. “Actually, we were matched with him [the baby boy] two days after I found out I was pregnant.” 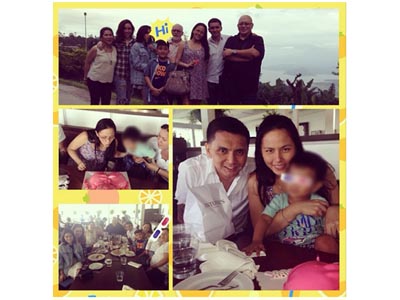 She talked about her discomfort during the first three months of pregnancy that worried her and Jimmy during a Gilas Pilipinas game in Spain.

LJ isn’t the only one adjusting to their growing family. Her husband Jimmy, who is Gilas Pilipinas captain, also shared how he’ll manage his basketball career once the baby girl joins the family.

GILAS PILIPINAS PLANS. “It’s gonna be a little bit of an adjustment, having a growing family and playing in the PBA season. But again, it’s an exciting time for my wife and I because family comes first. That’s gonna be first priority—our daughter and our son. But I’ll still be playing and I’ll be joining Talk 'N Text later on,” he added.

Showbiz moms and basketball star dads like Team Kramer are making videos and posting them online. Do they see their family doing the same thing?

They are open to letting their children explore basketball and perhaps, even showbiz. “Yes, I plan to brainwash them,” LJ joked.

What are LJ's plans after she gives birth? Will she return to showbiz?

“We’re talking about it, because I’d love to, but I also have my business and we’ve started a franchise, so it’s keeping me really busy right now. Siguro once in a while I can do a guesting or hosting. Excited na rin ako e,” she said.

As for Jimmy, even if he pushes through with his rumored retirement from the PBA, he will still be active in basketball, which is his passion.