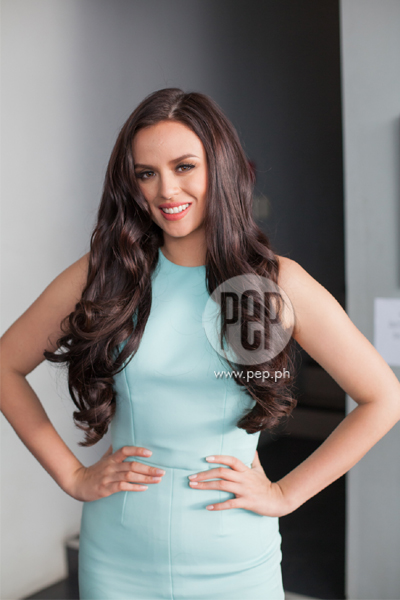 Despite her picture-perfect features, Georgina Wilson admits to having hair issues: “Honestly, my biggest problem, and anyone who knows me knows this, I have so many split ends and I am obsessed with picking them out, which is like the worst habit ever.”

Believe it or not, Georgina Wilson has split-ends!

The statuesque beauty admits, “Honestly, my biggest problem, and anyone who knows me knows this, I have so many split ends.

"I am obsessed with picking them out, which is like the worst habit ever...

Add to this, Georgina says, “For the girls, especially the ones who have really long hair up to here [below the shoulders], it's really dry.

"Unless you're in the industry, you won't understand the damage that constant blow-drying to the hair does.”

Now, how does she plan to cope with her bad habit and the numerous factors that affect her hair?

She says, “It's exactly where I am everyday. I'm in shoots every single day.

"To have products that work to make sure you always look good, that's what's really important.”

2. Eat anything that helps nourish the hair.

She elaborates, "Start by having healthy hair. I take supplements and vitamins for the hair.

"A secret my cousin taught me is to eat eggs. Your hair gets really thick and strong, and that really helped me."

“...Exposure to heat and styling products really does damage the hair."

George remarks, "After that, I don't worry about it too much. I'm not like fixated, I don't need to have every strand in place.

"I just wanna make sure na I've done my part taking care of my hair.”

4. Get a hair treatment every now and then.

THE ANTM EXPERIENCE. Tresemme also played a huge part in Asia's Next Top Model (ANTM), with the latest season hosted by Georgina.

She was in Singapore recently, wrapping up taping of the Asian version of the American franchise.

George confesses, “I definitely think this season is a lot more fashion-forward in terms of us and the girls.

"Like every elimination, they really experimented with a lot of different hairstyles.

“We wanted to make sure the show felt like a fashion show. We didn't want it to get lost in the reality of it all. We wanted viewers to understand the models' journeys."

Lourd Ramos, ANTM resident hair expert, also said as much about this season being big on hair, during the show's cattle call last year in Manila.

George adds, “There's a challenge I want to talk about but I guess I can't because they'll have to watch pa.

"There was a challenge, that was pretty difficult and I was like, I don't know if I can say this, but I don't think I'd be able to do that, it's pretty challenging, really, really tough!”

George shares what she believes the show has done for her.

"The show really helped me reflect on my career, the things I've had to do, and what you need to do to become a top model."

She shares a recurring lesson they had on each episode, “One of the things really, is making sure, and this was quite foreign to the girls at first, we had to make sure that the girls understood that their body is their asset.

"Their hair, their face, taking care of yourself is of utmost importance. Like, you can't come to a shoot with your hair completely damaged.”

TIME MANAGEMENT. Despite the glitz and glam, George admits the job has taken a toll on her time.

“It's so difficult, I wasn't really able to put anything on hold in Manila, so it was like trying to manage two lives at the same time.

"The taping schedule of ANTM was a lot more demanding than I thought it would be. I thought we'd have this day off, but any days off we had, we were completely bed-ridden. I was so tired!”

She smiles as she recalls, “But you know when something is that fulfilling and really exciting, it doesn't matter how tired you get.

“Let's just say I am looking forward to a long break. I don't know when it's gonna happen," she says, adding that she's trying to juggle work in her company, Sunnies, as well as endorsement deals and editorial shoots.

LOOKING BACK. She talks about the difficulties of hosting Asia's Next Top Model.

“There were a lot of times when I had to eliminate someone, that's really the worst part of the job.

"I'd wait for them to leave and I'd really cry. It was a lot more emotional for me than I thought it would be."

George went through several learning curves on the show, but despite the challenges, she feels grateful for the experience of mentoring aspirants, and making an indelible influence in their careers.

She proudly says, “You feel like these are your children almost, even though some of them are like a year older than me. I felt responsible for nurturing them, making sure they will be okay, even after the competition.”