Vic Sotto and Pauleen Luna engaged: A look back at their "roller-coaster" love story 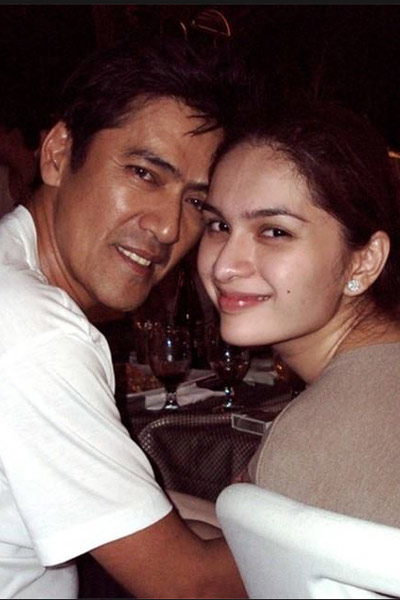 Vic Sotto and Pauleen Luna, their first selfie together back in November 2011.

Vic confirmed their engagement earlier today, September 2, at the presscon of the real estate company he is endorsing, the Citi Global Realty and Development Inc.

The loudest cheer came from people who know the couple.

It was no secret that their four-year relationship hurdled other challenges, aside from their 34-year age gap.

ROUGH START. In the beginning, Vic and Pauleen kept their relationship quiet.

The rumor that they were dating started to circulate in December 2011, with both parties neither confirming nor denying it.

It was at the press conference for Enteng Ng Ina Mo that Vic was first confronted about their relationship.

He evaded the question and talked about Pauleen's cameo role instead.

"And in fairness to Pauleen, maganda ang pagkakaganap niya..."

At that time, it was alleged that Vic had been showering Pauleen with gifts.

Fanning the flames were reports about Vic supposedly helping Pauleen build her house.

In an interview with Startalk last January 7, 2012, the Eat Bulaga co-host cried, "unfair."

"Since her start in this industry, she has but one goal—that is to enjoy what she loves the most—acting and hosting. What she earns from this profession comes secondary to her passion.

"She is a very simple lady with simple wants and needs. She has been smart in ensuring that her future is secured through her investments.

"We would like to extend our regrets to Mr. Vic Sotto for being dragged in this issue.

"We respect his show of interest with Pauleen and trust that whatever she decides regarding this matter will be for the best of everyone."

After a long pause, Vic smiled and told him, “Pauleen.”

“Sabi ko, ‘Why don’t you get someone who would understand when you grow old?'"

Slowly, Pauleen got the nod from those who initially doubted her love for Vic.

In another interview in April 2014, Danica underlined her “respect” for Pauleen.

“Some people find it, like, parang medyo surprising na ang bata, but I cannot not respect her because she’s nice to me.

"So, parang walang reason para sungitan ko siya or anything.

"Nakakasama ko rin siya lumabas, but with my dad."

Danica also revealed that Pauleen is close to her kids, Mic and Caela.

In June 2014, Dina praised Pauleen for sticking with Vic despite all odds, "...the mere fact that she's still there, it's not right for people to judge her na she's not sincere.

"Some people would say na she's just after the money, but can you imagine how much this girl has to put up with?

Pauleen described Vic's ex-wife as “very warm” and the meeting made her “very happy.”

In a separate interview last August 15, Dina described the encounter as "very bold gesture" on the part of Pauleen.

"Pero sa akin, very bold na lumapit siya, maayos naman and I commend her for that.

WEDDING TALKS. It was early this year when the couple began dropping hints that they're ready to take their relationship to the next level.

Last May, it was even reported that Vic proposed in Hong Kong.

Added to this was the rumor claiming Vic had been building a house for Pauleen.

On May 9, 2015, Pauleen said her relationship with Bossing had gone from "roller-coaster" to "smooth na smooth."

She also didn't deny that they've been talking about marriage.

What kind of wedding does she imagine for him and Bossing?

And now that Bossing had popped the question, the two are back to being mum about the details.