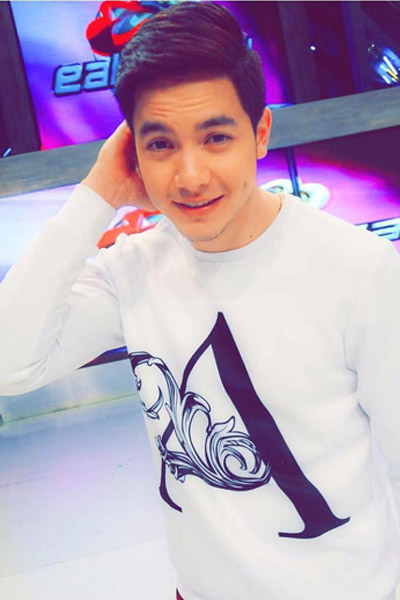 It's Alden Richards's time to shine this 2015. Hot on the heels of becoming the ultimate bae of Yaya Dub are numerous endorsements, an album, a film, and, most likely, a TV series.

Before AlDub, there was just Alden Richards, the Kapuso actor/TV host.

Before Alden Richards, there was Richard Faulkerson Jr.

Maine Mendoza a.k.a. Yaya Dub saw the cutie at the Candy Fair and snap a photo with him.

Neither of them had any idea that their paths would cross again five years after to become a noontime sensation.

Least of all Alden. He had no inkling of the surge in popularity that awaited him.

PROMISING STAR. In a feature episode in GMA’s Tunay na Buhay in 2013, Alden revealed that his dad wanted him to become a pilot.

It was his mother who dreamed of seeing him on television.

Alden’s desire to pursue acting was fuelled by his mother’s passing.

He tried his luck in various talent search competitions, including StarStruck, but he barely made it to the elimination rounds.

This made him realize the struggles of becoming an actor, but it also helped him appreciate the process.

NEXT LEADING MAN. In 2010, he finally hit his stride when he landed the role of Joma in the telefantasya, Alakdana.

Audiences took notice of Alden in the teleserye and the warm reception led him to be in the cast of the movie Tween Academy Class of 2012. He was 18 years old then. His boy-next-door appeal piqued the interests of teens and his fan base began to grow.

It was the industry people’s turn to take notice of Alden when they saw in the Yam Laranas movie, The Road. Alden’s portrayal of a boy with psychopathic tendencies helped shed off his teeny-bopper image and validated his versatility.

MATINEE IDOL. His role in The Road opened more opportunity for Alden to showcase his talents.

He acted opposite Dingdong Dantes and Marian Rivera in My Beloved in 2012. He then got his first lead role in 2012 in One True Love with his first onscreen partner, Louise delos Reyes. This was followed by Indio with Senator Bong Revilla Jr. and Mundo Mo’y Akin (also with Louise), both in 2013, and Carmela that he headlined with Marian Rivera in 2014. His latest acting role made him part of the roster of actors to portray Jose Rizal.

Alden was chosen to play the national hero on GMA’s first BayaniSerye, Ilustrado. Aside from his TV projects, he explored different arenas in the industry.

He launched a music career in the now defunct Party Pilipinas in 2013. His first single was his own rendition of Shamrock’s “Haplos.”

PAMBANSANG BAE. Alden can hardly believe the success of the AlDub tandem.

Nowadays, he primarily appears on television as a TV host of the Eat Bulaga! segment “That’s My Bae” with Sam YG.

Maine was part of the “Juan for All” segment, which Alden decided to sit in one day, and one Dubmash later—an app which has become a plot device to the AlDub loveteam—the first Kalyeserye was conceived. Despite the phenomenal success surrounding him, Alden remains the same Alden five years ago and keeps his focus on what is important—his family.

In Kapuso Mo, Jessica Soho last August 16, he reflected on his career and how far he has come from his beginnings.

At the end of the day, Alden Richards is a star who has his feet firmly on the ground.

And he is finally geting the breakthrough he deserves as the ultimate bae.