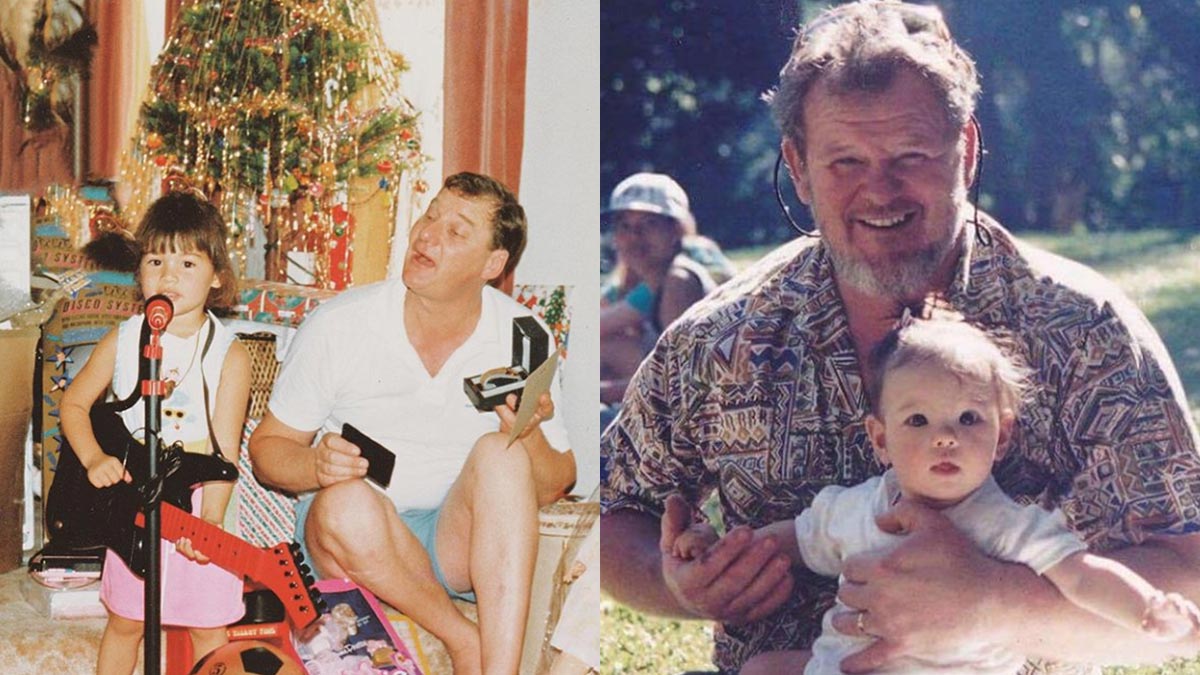 (Left) Anne Curtis posts this favorite photo of herself and her dad, a huge supporter of her dream to become a singer. (Right) The once and future Miss Universe Catriona Gray in the arms of her dad, Ian Gray, in whose heart she will always be his "little girl."
PHOTO/S: @annecurtissmith / @catriona_gray on Instagram

Father's Day has officially ended, but social media are still filled with dads in the center of souvenir family photos.

Celebrities also took to social media to honor the special men in their lives.

Here's a list of local stars who paid tribute to their dads with their adorable throwback photos:

Catriona Gray, arguably one of the most influential Miss Universe titledholders, remains her dad's "little girl at heart."

On Sunday, Catriona paid tribute to her dad, Ian Gray, and uploaded on Instagram her baby photo with him.

She wrote, "Happy Fathers Day to my papa bear and all the amazing fathers out there!

"Thank you daddy for always being such a strong role model for me, and for always giving your all for our family.

"I would not be the woman I am today if not for you - but I'll always be your little girl at heart. I love you!"

The Miss Universe royalty spent most of her childhood in Australia before moving to the Philippines to pursue a career in modelling.

In the photo, Gabby was seen holding KC when she was still a baby.

She wrote, "I’m waiting for the day I can see my future husband hold our own child this way

"But for now, I want to greet my papa @concepciongabby a Happy Father’s Day!

"Thank you for always calling me on any ordinary day, for making up for lost time, and taking the time to ask a genuine 'how are you?' I love you"

The 34-year-old also greeted and expressed her gratitude to her second dad, Senator Francis "Kiko" Pangilinan.

KC wrote, "From one 'adopted' daughter to another - let’s celebrate the dads who CHOSE to be our dads this father’s day.

"Happy Father’s Day to you @kiko.pangilinan - these photos remind me of the priceless support and encouragement you’ve given me, from teaching me how to read the dictionary, to a detailed whiteboard lecture on how to budget money, to attending my charity events, and the launch of my own jewelry brand.

"Thank you for providing in all the ways you do, and for representing family. I love you"

On Father's Day, It's Showtime host Anne Curtis uploaded on Instagram her favorite photo of herself with her dad.

The Kapamilya actress may not be the best singer in the country, but her dad defintely thinks so.

She wrote, "Happy Father’s Day to my gentle giant.

"This will always be my favourite photo of us as it shows how supportive my dad has always been of following my biggest dreams - and making me believe I was the best singer in the world.

"Love you Father Dearest! Happy Father’s day to all of your dads and my daddy followers.

"I pray for your health and happiness. God Bless all of you!"

Heart uploaded a throwback photo of herself with her dad and wrote, "Happy Father’s Day to all fathers out there, but most especially to the first man I’ve ever loved, @rey_ongpauco! ? #throwback"

Francis passed away due to multi-organ failure in March 2009 after a long battle with leukemia.

In an Instagram post, the 25-year-old Kapamilya talent admitted to missing his dad and recalled his best features.

He wrote, "Pa, Happy Father’s day I’m thankful for all the little & simple, yet powerful memories you left behind.

"To this day I still wonder what the world would be like if you were still around.

"Will always remember to be as ambitious, as imaginative, as grateful, as humble and as loving as you. Please know that. Love u"

On Instagram, Rayver recalled one of the most important lessons he, and his brothers Rayver and Omar, learned from their dad before he passed away.

He wrote, "Happy Father’s day in Heaven Papa! We miss you! Idol ka naming magkakapatid. We love you Forever.

"Thank you for everything.

Rodjun and Rayver's dad passed away in 2009 due to kidney failure.

Rising Kapuso actress Therese Malvar also shared one of the most important things she learned from her dad on Father's Day.

She wrote, "I remember my dad would always say 'If they can do it, you can. You can, and you will.'

"But it was “Believe you can do it, because I know you will.

"Don’t drown in your ocean, don’t belittle its waves. Swim.

"Learn how to swim and be thankful that you did for you wouldn’t reach an island without the efforts of swimming.

"Thank you Daddy for always believing in what we can do and not searching for the things we can’t.

"Thank you also for introducing Christ in me. We love you and Happy Father’s Day!!!!"

Star Magic talent Markus Paterson made sure to greet his father George Paterson, who is thousands of miles part.

He uploaded a photo of his dad on Instagram and wrote, "happy father's day to you, my best mate.

"Love you always and honestly don't know what id do without you.

"Have a good day in France daddyo AKA Pablo Escobar"

In a separate post, he wrote, "couldn't of asked for a better father."

The Pinoy Big Brother 737 grand winner uploaded his childhood photo with his dad while on a vacation in Baguio City.

Vlogger/actress Ashley Rivera wishes that her future husband would also be as confident and as talented as her father.

Jason Magbanua is a famous videographer.