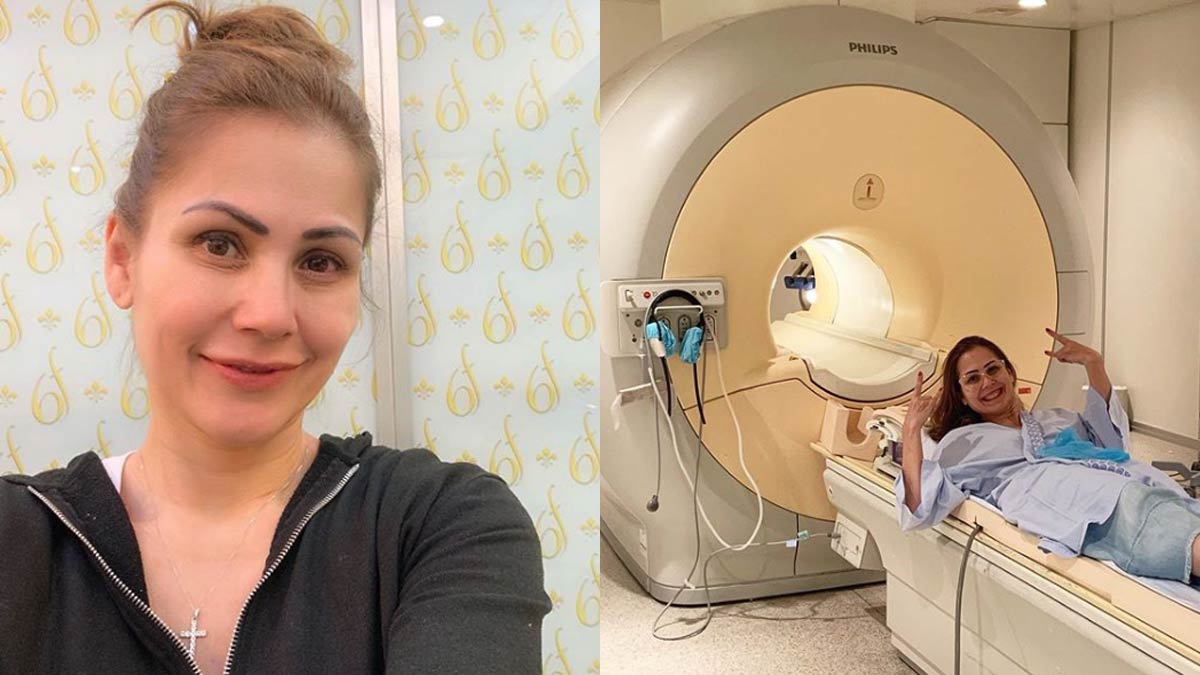 Maritoni Fernandez, 50 and cancer-free for nearly 20 years, wants women to be on guard as the risk of breast cancer ranks high among the gender.
PHOTO/S: @maritoni.fernandez on Instagram

Maritoni Fernandez, 50, has been cancer-free for nearly 20 years.

She was scanned early this week to get an update on the status of her remission, and it was good news.

She happily writes on her Instagram post, "First time ever inside an MRI machine to get my boobies checked.

"Gotta be thorough and it's upcoming my 20 year mark soon... praise God!"

Maritoni then describes the MRI scan as "a test of a different kind!"

She continues, "Gotta say, it's not easy lying flat on my tummy for 20 mins straight without being allowed to move an inch while those loud propeller sounds are going on...

"Thank goodness for ear muffs, a crazy fun imagination like mine and the fact that I'm not claustrophobic."

The MRI or magnetic resonance imaging is a technique in radiology that puts patients inside a large tube with powerful magnets to scan the inside of their body.

In her post, the actress thanks the team at St. Luke's Medical Center in Bonifacio Global City for their assistance.

"Thank you to the techs at BGC St. Luke’s for explaining the process in such amazing detail and to my angel today, Doc Mike, for being there to reassure me of my results right away.

"I am wonderfully blessed. Thank you Jesus! Here's to the next 20!"

Maritoni also gives a shout-out to her daughter Lexi, who accompanied her to the hospital.

It was in April 2001 when Maritoni was diagnosed with stage 2A breast cancer.

The actress was in her early thirties at the time.

But as she revealed in an interview with Philippine Daily Inquirer in 2011, Maritoni already felt a lump on her right breast after she gave birth to her first child. She was 26.

The following year, she consulted with her OB-GYN, and was told "Bata ka pa, you have nothing to worry about."

Years later, when her mom got very sick, Maritoni flew to the U.S. to get a second opinion from her uncle, a doctor.

The actress-advocate informed her uncle about the lump.

She recalled in her 2011 interview, "He asked if I had anything done. I said yes, got the results and looked at it for the first time.

"It said I have a palpable mass, calcification; the report said I should have a checkup in six months.

"My uncle asked if I could postpone the Wednesday flight to Saturday so that we can have a week to do tests. He said, 'Let’s do a needle biopsy.'

"I was very blessed. He's Filipino. There was a team of 10 doctors, all Pinoy friends of my uncle.

"He came from the OR and said, 'Positive, I'm sorry we have to remove the lump, but they still can't tell you yet if it's cancer.'

"They did a biopsy and found out it was positive for malignancy.

"They removed 40 percent of my right breast because they insisted that a lumpectomy is as effective as mastectomy."

According to BreastCancer.org, lumpectomy is "surgery in which only the tumor and some surrounding tissue is removed."

Mastectomy, on the other hand, means "the removal of the whole breast."

In a 2003 interview with YES! Magazine, Maritoni opened up about her mindset then.

She said, "I'm idealistic. I really like to believe the best in everything.

"But I'm also realistic. My ideals are based on reality, not on the unreachable.

"When I found out that I was sick, I took control of the situation. I prepared myself mentally.

"When I got to that level, I relied on faith. The rest is really prayers.

Maritoni was declared clear of cancer on October 11, 2001.

MARITONI ADVISES WOMEN TO DO A BREAST SELF-EXAM

Breast cancer ranks as "no. 1 amongst all cancers in the country."

Maritoni is among the celebrities who encourage women to do a breast self-exam.

A breast self-examination is one of the ways a woman can familiarize herself with her body and can help detect any signs of breast cancer early on.

The Philippine Cancer Society says that "there are almost no symptoms in early breast cancer," which is why a breast self-exam is recommended every month.

Signs to look out for include:

How does one perform a breast self-exam?

The National Breast Cancer Foundation Inc. in the U.S. presents three ways to do it: in the shower, in front of the mirror, and lying down.

When in the shower: "Using the pads of your fingers, move around your entire breast in a circular pattern moving from the outside to the center, checking the entire breast and armpit area.

"Check both breasts each month feeling for any lump, thickening, or hardened knot.

"Notice any changes and get lumps evaluated by your healthcare provider."

When in front of the mirror: "Visually inspect your breasts with your arms at your sides.

"Next, raise your arms high overhead.

"Next, rest your palms on your hips and press firmly to flex your chest muscles.

"Left and right breasts will not exactly match—few women's breasts do, so look for any dimpling, puckering, or changes, particularly on one side."

When lying down: "The breast tissue spreads out evenly along the chest wall. Place a pillow under your right shoulder and your right arm behind your head.

"Using your left hand, move the pads of your fingers around your right breast gently in small circular motions covering the entire breast area and armpit.

"Use light, medium, and firm pressure. Squeeze the nipple; check for discharge and lumps.

"Repeat these steps for your left breast."

Health became a major priority to Maritoni after she got diagnosed with breast cancer.

She started with a diet of fish, chicken, and vegetables, and frequented the gym four or five times week.

She has since been going to the gym "at least thrice a week" and has maintained a balanced diet.

She told Philippine Star in 2017, "I think what I've achieved in the gym through my regular workouts is strength and a body that kicks ass at my age. Hahaha!

"My current fitness goal is simply maintenance. To stay as fit as I am today.

"To be able to main my figure without having to worry too much about what I eat."

For her, the secret to having a healthy lifestyle is "simple."

She continued in her 2017 interview, "Eat what you like but in moderation.

"Exercise regularly, doing something you enjoy so you'll actually stick to it.

"Sleep at least six hours a day. Take naps in traffic. They do wonders for your well-being.

"Wellness is not a short-term thing. it's a lifestyle choice so you have to look at it long term.

"Eat right. Exercise. Rest enough and always hydrate a lot! Nothing beats that."