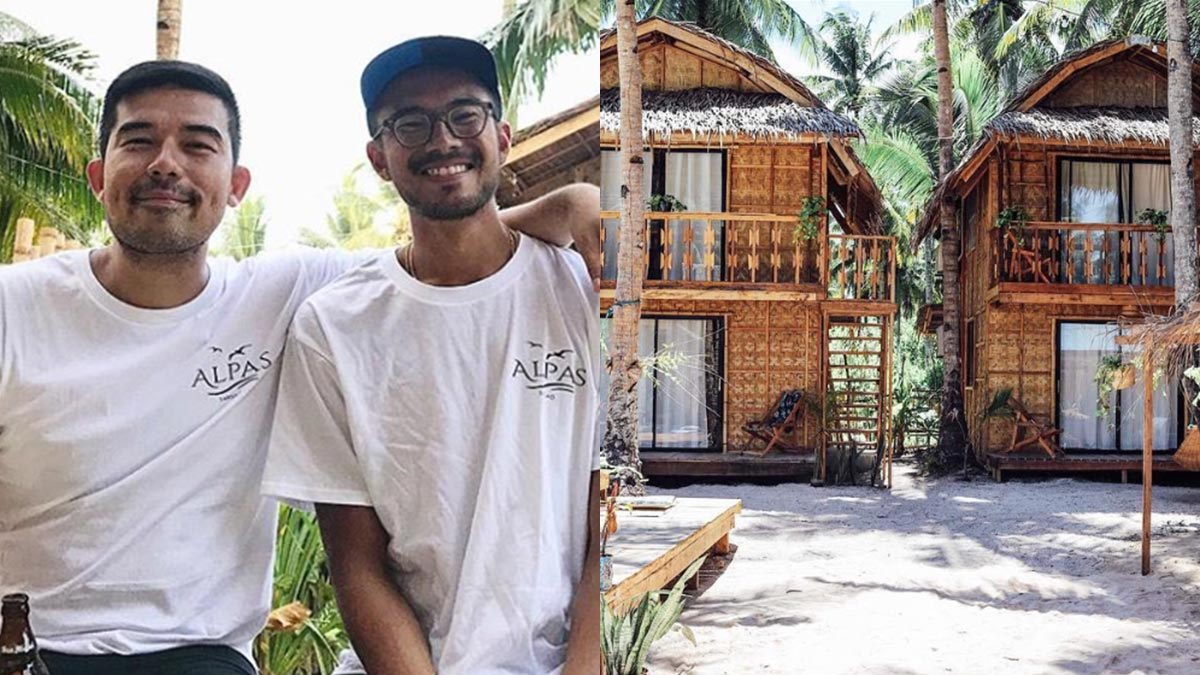 Hale frontman Champ Lui-Pio and his brother Chino are the owners of Alpas, a Filipino-themed hostel in Siargao which opened in August 2018.
PHOTO/S: @alpassiargao on Instagram

Summer is already in full swing and there is nothing better than to spend it relaxing at the beach.

The Philippines is home to several world-class beaches, one of which is Siargao Island, a gorgeous teardrop-shaped island, which is also known as the surfing capital of the country.

Hundreds of local and international tourists have come flocking to the island in the recent years to relax and ride the waves.

Hale frontman Champ Lui-Pio and his brother, former MYX VJ Chino, are among those who fell in love with the place.

Both were smitten by the island's rustic charm and decided to open their own hostel called Alpas.

"It means to be free, to be loose," Champ said in an exclusive interview with PEP.ph (Philippine Entertainment Portal) last February.

Champ hopes that many Filipinos get to experience the beauty of Siargao.

"Siargao is beautiful. It's really a magical place.

"I wish everyone can experience it for themselves. I don't really need to sell the island.

"You just have to go there and really experience it yourself."

He added, "What I like about Siargao is that there's a very proactive community.

"They're very active protecting Siargao, making sure that what happened to other islands won't happen here.

"It's not perfect but at least there are steps happening to ensure na yung progress is a positive kind of progress."

Champ's love story with the island started in 2017.

Film producer and director Paul Soriano and his team from TEN17P borrowed Hale's song "Alon" to be part of the official soundtrack of Siargao, which starred Jericho Rosales, Erich Gonzales, and Jasmine Curtis Smith.

Champ and his band mates flew to Siargao to film promotional materials for the movie.

He recalled, "It was my second time in Siargao, but this time around, there's something special.

"Along the way, I met some locals. At frst, they were trying to sell me land.

"'Tapos ayun, we became partners because of the movie.

"I think everything happens for a reason. Yung Alpas na hostel ko, it's because of the movie talaga.

"I'll always credit it to the movie."

Champ initially wanted to name the hostel after their song, but the plan did not push through.

He explained, "I actually wanted to name the hostel Alon because of the song.

"But because of trademark disputes, Alpas na lang siya."

HOW CHAMP TRANSITIONED FROM MUSICIAN TO BUSINESSMAN

More than anything, Champ is grateful to the music industry and his band for opening up new doors to him aside from music.

The 37-year-old musician has been in the business for 15 years.

In 2004, he entered the music scene as vocalist and guitarist of Hale, which produced four mainstream albums and 18 mainstream singles.

On August 6, 2010, the band publicly announced that they were disbanding.

Champ went solo, and produced the album Synergy, which was also released in 2010.

In early 2011, the Business Administration major began wearing the hat of a businessman, and decided to form Mecca Music, which launched Filipino synthpop project Somedaydream.

Subsequently, he ventured into food businesses and put up his own video-editing company.

"I'm also part of Sindikato Productions, we're a video editing company. It's because of the music videos of Hale.

"Lahat stems from Hale, even Alpas."

Champ is a co-owner of 12 Monkeys, a music bar located in El Pueblo, Ortigas.

WHAT ARE ALPAS' ROOM RATES?

In less than a year, Champ, his brother Chino, and two other business partners officially opened Alpas. The hostel is now on its ninth month since opening last August 2018. Its rates are competitive.

Most of their guests are backpackers from the United States and Europe. Champ and his business partners wanted their guests to feel at home, and experience Filipino culture.

"It's wood-based. The vibe, we're just keeping it very relaxed.

"Again, Alpas means 'to escape' so when you're there, it's just quiet, puro greens.

"So it's going back to basics. Lots of wood, lots of greens."

The band vocalist added, "We have four huts. We have private rooms and shared rooms."

Rates start at PHP575 for a bunk bed in an eight-person domitory.

Meanwhile, their double or twin room is priced at PHP3,450 per night.

Since they are a newbie in the hostel industry, Champ admitted to experiencing some challenges.

"We're in the service industry at the end of the day.

"So kailangan, we really have to be accommodating. We have to be service-oriented."

"Hindi agad-agad because you can't physically be there. You have to work your way around the geographical limitations.

Chino is more hands-on when it comes to handling their hostel business.

According to Champ, his brother frequents Siargao.

"He's basically based in Siargao. He's been surfing a lot and it shows.

So far, Alpas has been receiving positive reviews from its guests.

But Champ said they have yet to learn and master the business side of things before they actually consider opening up other branches in other beach destinations in the country.

The "Kahit Pa" singer told PEP.ph, "This is not related to music so ako, ang dami ko natututunan araw-araw.

"Before we even expand, we wanna perfect what we have, what we built. So one step at a time."