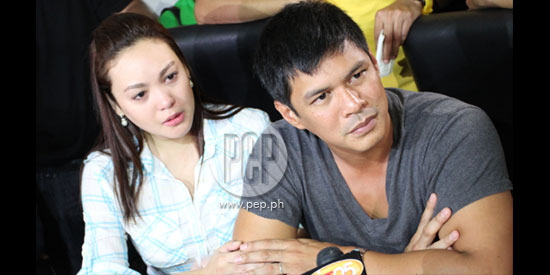 Over a year ago, Raymart Santiago and Claudine Barretto seemed to be a rock-solid couple, holding hands while narrating their account of the airport scuffle with media man Ramon Tulfo.

Raymart Santiago is determined to seek an annulment of his nine-year marriage to Claudine Barretto.

The actor himself revealed this to PEP.ph (Philippine Entertainment Portal) and other media, yesterday, September 26, at the story conference of GMA's Villa Quintana.

Raymart is currently engaged in a court battle with Claudine.

She has accused him of hurting her physically, and has asked the court to issue a protection order against him, which would effectively keep him away from her and their children.

He has countered with an affidavit saying that it is he that is the battered partner in their relationship because of her drug habit, and has petitioned the court to give him custody of their six-year-old biological son and their nine-year-old adopted daughter.

But one question hangs in the air: What triggered Raymart's decision to leave the Loyola Grand Villas home he built with Claudine?

It may be recalled that @gretchenbarretto was the first to pick up on Raymart leaving the conjugal home, as she confronted an Instagram user named "btchjuliaisbitch."

One of @gretchenbarretto's posts on April 13 was: "Your husband walked out coz [of] you [your] violent ways..."

Though @gretchenbarretto did not name names, her Instagram followers were quick to conclude that she was referring to Raymart and Claudine.

On April 24, Inday Barretto, the mother of Claudine and Gretchen, confirmed this, through a letter published in Ricky Lo's column in the Philippine Star: "Raymart left home? Yes, it is true."

Rumors that the Santiago couple's marriage was on the rocks had been circulating in showbiz for some time, but the couple had not given the public a hint of their troubles.

But apparently, even at the time, things were seriously wrong between him and Claudine.

According to his counter-affidavit, which he submitted to the Office of the City Prosecutor of Marikina on September 24, he left home on March 17, or several weeks before his April press interviews.

Raymart said in his counter-affidavit: "I finally decided to turn and walk away for good."

His reason, still according to the counter-affidavit, was: "The final straw that caused our marital breakup was when Complainant imposed upon me to sue the latter's sister, Gretchen Barretto, for alleged derogatory remarks made by her against our children."

A BIG FIGHT. Still according to his affidavit, there was one occasion when Gretchen called Claudine on the phone, and that the latter thought her sister's call was an "insult."

From then on, Raymart's affidavit said, Claudine repeatedly prodded him to sue Gretchen.

In his words: "I refused to file a complaint based on hearsay considering that I have not directly heard the same from Gretchen, and I would be fabricating tales should I proceed with the suit."

Last March 17, he continued, in Claudine's "desperate attempt" to make him sue Gretchen: "[She] threw her usual tantrums.

"She grew violent again, hurling invectives at everyone who crossed her path, including me, our household help and our personal assistants."

The Instagram post, which had told the user "btchjuliaisbitch" that her husband left her because she was violent, also said:

"What exactly did you do to his Porsche? His laptop?"

On April 22, Claudine Barretto posted on Instagram a photograph of herself washing a black Porsche with Sabina.

Earlier today, September 27, PEP got more information on the Porsche.

In a phone conversation and text exchange with Raymart's lawyer, Atty. Ruth Castelo, she explained why @gretchenbarretto asked about her client's car, and why Claudine used "controversial Porsche" as the caption for one of the two photos she posted on her Instagram nine days later.

"This is true," Atty. Castelo said about the fate of the Porsche.

"Claudine made several threats to Raymart that she was going to vent her anger on his cars after he left the conjugal home for good on March 17, 2013.

"Raymart refused to disclose his whereabouts to Claudine for fear that she will harass him and nag him again.

"Claudine made her threats real and destroyed Raymart's Porsche sometime in April 2013."

In Raymart's counter-affidavit, he stated: "Complainant one day turned violent again and relentlessly smashed my Porsche parked in our garage with a tubular steel."

His claim was seconded by Rodolfo Gedraga, the masseur.

Rodolfo said that Claudine first instructed him to switch off the home's CCTV, or security cameras, and he obeyed. He said this is what happened next:

According to Rodolfo, the car's windshield, side mirror, and hood were damaged.

(Editor's Note: PEP carried two articles about the Porsche. The first was about Gretchen asking what happened to it; the second was about Claudine posting two photographs of the car. PEP, unable to get confirmation on the fate of the car, did not say that the car had been ruined by the actress.)

Rodolfo added that, with "electrical tape, pentel pen black, and black Manila paper," he and one of the drivers, whom Rodolfo identified as Junior, managed to conceal the damage.

THE COUPLE'S OTHER ISSUES. But Claudine's rift with her sister Gretchen was, according to Raymart, not the only issue in the marriage.

The counter-affidavit was also accompanied with videos and photos of Claudine's supposed "drug use."

Atty. Ruth Castelo, in the phone interview with PEP, said: "Everything that we stated in the counter-affidavit are facts as narrated by Raymart.

"These are actual events that took place, and are all supported by evidence.

"These pieces of evidence are attached to the counter-affidavit, 41 annexes in all."

For her part, Claudine has accused Raymart of physical, psychological, economic, and sexual abuse.

In PEP's interview with her lawyer, Atty. Junelet Mataro, on August 29—the day Claudine filed the case against Raymart, invoking R.A. 9262 or Anti-Violence Against Women and Their Children Act—Claudine's lawyer said:

"[We] have pictures, medical certificates to prove the physical violence inflicted upon her by Raymart.

“We also have pictures of the wounds of Claudine.

“We also have bank statements regarding the economic abuse that Raymart has inflicted upon her.

“We also have affidavits from the members of her family for the psychological abuse, because Claudine has said that she has been socially alienated by Raymart."

On October 8, the two are scheduled to see each other again, at the Office of the City Prosecutor of Marikina City.

PEP also made several attempts to reach Claudine, through her mother, Inday Barretto, and her lawyer, Atty. Ferdinand Topacio.

Atty. Topacio, responding via text messaging, said they will issue a statement on October 1, the same day they are calling for a press conference.

Inday Barretto said she will be at the press conference. The expectation is that Claudine Barretto will also be there.