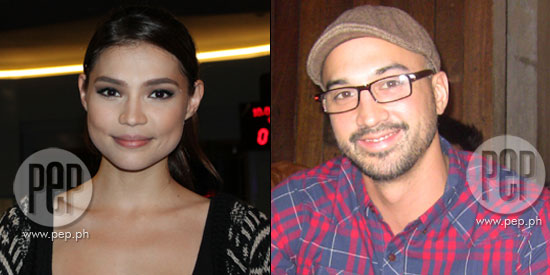 Bagamat natapos na ang kanilang relasyon, sinabi ni Rhian Ramos na nananatili pa rin silang magkaibigan ni KC Montero. Sabi ni Rhian, "You don’t let anything—like a relationship or maybe a failed relationship like that—you don’t like that kind of thing to affect you. Because the people naman that you take to your old age are your friends. And that’s what I want him to be, I wanted a friend."

"I just saw him today, in fact.

"And ayun, we’re updated naman on each other’s whereabouts and what we're into.”

"Sometimes, even if you go through something difficult or as weird as a breakup, ang worth it talaga, yung person.

"You're gonna really keep the man in your life. That’s why I see him.

"I wanna keep him in my life, so that’s why we’re still okay.”

Tugon ng 23-year-old actress, “Yeah, of course, KC is such a good person.

"Parang there’s no… there’s no reason to be upset.

“I’m happy to still have him around.

"Yun, I have… wala… it’s actually… if there is such a thing, then it’s a good breakup.

“If there’s such a thing as a good breakup, then I have one.”

Sagot ng Genesis star, “I don’t think naman it's important for everyone to know what exactly it was, as long as they know that it was a mutual decision.

"We both naman agreed on it and there’s no bad blood between us, then no one should worry," medyo natawang saad ni Rhian.

Sagot ng aktres, “No naman, I don’t know the exact date—but before Yolanda.”

Read: KC Montero on girlfriend Rhian Ramos: "Everything she does drives me crazy, in a good way."

"Sometimes kasi, the people that you really wanna keep in your life, you just make sure they’re there.

"Because the people naman that you take to your old age are your friends.

“And that’s what I want him to be, I wanted a friend.

"I want him to be a friend that I can have around for a lifetime.”

“I haven’t really figured out what I want to do for my lovelife, for the next few years.

"I’m just saying na parang we get along, he’s a good person...

"I don’t know, I don’t wanna close any doors.

"I don’t want to decide because I am not a fortune-teller, so I don’t know.

Sabi ni Rhian, “No, I'm constantly seeing him right now, so it’s not a sawa problem.

"It’s just something that we decided together.”

“Oo naman… he always has a special place in my life and my heart.

“Wala, he’ll know that naman, e, because, ayun nga, we’ve been broken up for a while, but we still hang out because we love each other like that.

"We don’t have to handle, like, any kind of sisihan or bitterness because we’re okay with it.”

Sagot ni Rhian, “No, not really. I wanna fly solo for a while.

“Parang, I just wanna be able to take the next bit of time to discover myself and be good to me and, wala, just grow up by myself.”