Actress-activist Monique Wilson to PNoy: “If you don’t know how to lead, be humble enough to step down.” 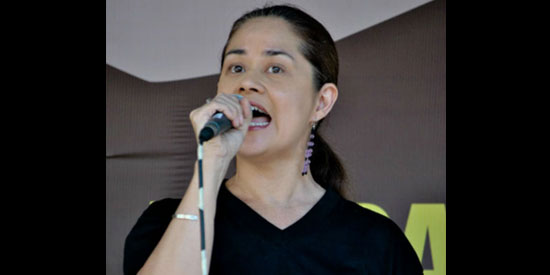 “We will have a march to the Bonifacio Shrine.

“More than 20 schools will participate in our dance-athon. That is our dance for freedom and rising for the truth.

“We will also have different speakers.

"These are the brave women who are standing up for truth and accountability that we all seek from the government.”

Pahayag ng former Miss Saigon star, “It’s a big honor for me to be global director.

“Because of this, I took a sabbatical from teaching in London para nandito ako to organize things here.

“It’s such a big responsibility kaya I have no other time to do anything else.

“But it’s okay because this is a really big cause at kailangan tutukan nang husto.”

“They send me their photos, videos, and what they have been doing sa kanilang mga risings. They make shirts and posters as well.

“Others naman e-mail me asking for guidance on how to start their rising.

“It really has become a global community.”

Saad ng 44-year-old theater actress-singer, “We have different forms of experiences with violence.

“In my family, I saw how my dad was abusive to my mom, not just verbally, but physically and emotionally as well.

“Like, my brother would be allowed to do many things, pero kaming mga babae, hindi puwede.

“I always felt that kind of inequality and that woke me up somehow.

“I was always rebellious against my dad.

“He wouldn’t allow us to speak up or to talk about problems in our family.

“He never wanted me to study in UP because sasali lang daw ako sa Gabriela and I would be a radical activist.

“Women are taking their cases to court.

“Kung noon takot silang harapin ito, now they are fighting, which is good.

“Ang nagiging problema lang is that our legal system is corrupt.

“What’s shocking is that rape or abuse is not just being done by ordinary men.

“Most of them are men in uniform, men of certain position in government. Men with power.

“And they are getting away with it.”

Saad niya, “When I went to Roxas City for one of our risings, may mga nanay na nagkukuwento sa akin na girls in their community, as young as nine years old, has to sell their bodies for fifteen pesos para lang meron silang pamasahe to go to school.

“It came na to that point na nakakalungkot tanggapin.

“Kaya we all have to do something to combat this.

“Kahit na hindi tayo kasama sa sinasabi nilang 70 percent of people in poverty, still, that is not a reason not to do anything.”

Ayon kay Monique, “Always na lang may offer sa akin to run for a certain position. But for me, that is a different world.

“I don’t know enough about politics, but I can always learn more about it.

“Though I haven’t spent a lot of time on it, I don’t ever want to say no.

“My feeling is that my biggest strength is my being an artist and I am autonomous.

“I know what my place is in the scheme of things.”

Reaksiyon niya tungkol dito, “Being a leftist means being against the government.

“And actually, the best activist should hold their government accountable.

“If they call Gabriela leftist, then I am proud to be leftist.

“Because, I think, it is more of showing your love of country and love of your people kasi you are brave enough to hold your government accountable.

“We call ourselves not leftist but progressives kasi, like Gabriela, KMU [Kilusang Mayo Uno], Migrante, Anak Pawis, and other groups.

“They don’t tow the line. They go all to expose whatever the problem is.

“We just want to communicate at pakinggan lang kami.

“Now, if you are this person who doesn’t want to listen, then you’ve lost all political will to lead people.

“If you are given the mandate by the people to lead, then you must bring yourself to the reality of these people who needs help.

“Why couldn’t he just listen? What he really lacks is compassion.

“Like what happened to the victims of Typhoon Yolanda, all he has to do is say sorry to the people of Tacloban and admit that he messed up and try to find a way to solve the problem out there.

“But he still justified and defended his actions and even said, ‘O, nabuhay naman kayo, ‘di ba?’

“I mean, what is that all about? That is lacking in compassion, ‘di ba? That was really not acceptable.

“There’s also lack of urgency on his part. What is he waiting for?”

“I think you don’t need a lot of intelligence to understand the plight of your people.

“You just have to roll down the window of your tinted SUV and look at the poverty that is staring you right in the face.

“What is so hard to understand?

“Subukan niyang pumunta sa Tondo or sa Payatas where Gabriela has taken me.

Diin pa ni Monique, “If he doesn’t want to get his hands dirty, then step down.

“We don’t need to call you to resign.

“It looks like naman you don’t like doing your job, so step down na lang and it’s the most dignified thing to do.

“Kasi you are not doing it to the best of your ability and you don’t even have the humility to say ‘help me.’

“These groups know what’s need to be done. They are the people who lived daily with oppression and poverty.

“All he has to do is listen to these people and don’t be afraid to ask for help. Ang dali lang naman sabihin ang ‘help me help you,’ ‘di ba?”

“Listen to the people. Hear their cries.

“Serve them with everything in you with your heart and soul.

“If you cannot, then resign. It’s the best option for you to do.

“You are keeping our country and its people chained and shackled in so much oppression and suffering.

“And just because you are not experiencing these sufferings, that does not make you not accountable to the sufferings they are going through with your lack of compassion.

“If you don’t know how to lead, be humble enough to step down.”