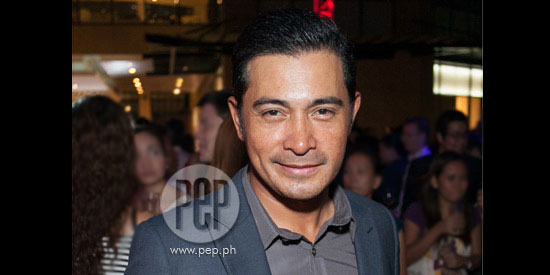 When asked if he is having a new “bundle of joy,” Cesar shook his head and said, "Wala, wala.

The actor-director was one of the celebrity guests who attended the gala night of the 20th French Film Festival held Wednesday night, June 3, at Greenbelt in Makati City.

When talk turned to his lovelife, the actor begged off from giving details.

What are his inspirations now?

Is he also inspired by Sandra who is rumored to be his current girlfriend?

The actor simply laughed and did not answer the question.

Their frequent sightings together have raised speculations about Cesar and Sandra having a romantic relationship with each other.

They have been reportedly spending time with each other in the United States.

The two were recently spotted in the audience of the May 26 episode of The Ellen DeGeneres Show.

Cesar diclosed that he returned to the Philippines just a few weeks ago.

When he was complimented for looking good these days, he simply said, "Dapat maraming inspiration. Dapat inspired ka to do another film.

"I haven't been doing any film for quite some time.

Since Cesar watched The Ellen DeGeneres Show with Sandra in the United States, does he consider that as their date?

The actor suddenly bid farewell to reporters by thanking them, "Maraming salamat. I'm here to watch a movie of the French Film [Fest]."

THE SOURCE. Later on, PEP.ph (Philippine Entertainment Portal) had the chance to interview Cesar exclusively about the controversies surrounding him.

What are his next projects?

Cesar said, "I'm doing a movie but I cannot disclose it yet.

"Kaya I went to the States to talk to Donald Martin, my Hollywood screenwriter friend.

"Dini-develop pa namin and we want to make sure that the script is good."

How about TV shows?

What is his reaction to reports indicating that he has fathered a love child with Sandra?

He has been sighted several times with Sandra...

Cesar said, "I've been sighted with a lot of women.

When asked directly if he is in a relationship with Sandra Seifert, Cesar opted to end the interview with a polite "Thank you so much."

The actor was married to Sunshine Cruz for 13 years but they ended up separating in 2013. They have three daughters.