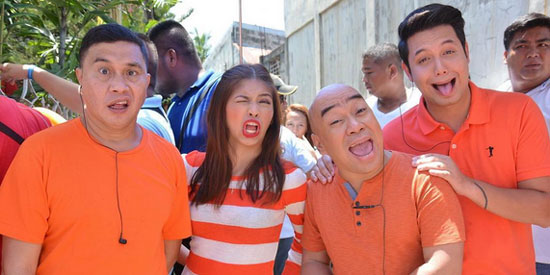 GMA Network cries foul over persistent signal disruptions on SkyCable Channel 12, which is the channel of the Kapuso network on the said cable service provider. Seen above is a behind-the-scenes photo of Jose Manalo, Maine Mendoza, Wally Bayola, and Paolo Ballesteros, taken during Eat Bulaga's September episode.

This is in relation to the alleged persistent signal loss on SkyCable Channel 12 (GMA-7) during the airing of the toprating Kapuso noontime show Eat Bulaga.

Based on “numerous complaints” from SkyCable subscribers, GMA maintained that there is “basis to believe that the signal disruptions were effected in order to reduce the viewership level of GMA/Eat Bulaga.”

GMA also cited in its NTC complaint that such “irresponsible acts” are particularly affecting Eat Bulaga’s Kalyeserye segment, which recently broke records in Twitter world with over 12 million tweets from avid fans of Alden Richards and Yaya Dub (AlDub).

GMA’s official statement, dated September 22, partly stated: “In its letter, the Network argued that it is significant that the signal loss and degradations are confined to SkyCable Ch. 12 [GMA-7] only to the exclusion of other must-carry channels, and that there is basis to believe that the signal disruptions were effected in order to reduce the viewership level of GMA/Eat Bulaga, which has enamored millions of viewers with its phenomenal AlDub/Kalye-serye segment resulting in the program’s very high ratings.”

GMA also submitted a DVD copy of a recorded video from a SkyCable subscriber in Pasig City, showing the reported signal loss of SkyCable Channel 12 during Eat Bulaga’s September 10 episode.

The same SkyCable subscriber stated that the signal loss seems to be isolated to Eat Bulaga! since its rival program It’s Showtime can be seen on SkyCable Channel 8.

At the same time, GMA submitted several written complaints from SkyCable subscribers to NTC as basis for the Kapuso network's complaint versus the cable service provider.

Another SkyCable subscriber from Bulacan, with username pirateyang23@gmail.com, described the signal disruption on SkyCable Channel 12 last September 5, as follows:

GMA has filed a similar complaint to NTC versus SkyCable last August.