PEP EXCLUSIVE Gretchen Barretto to parents Mike and Inday: "We hear Claudine's cry for help. Why can't you?" 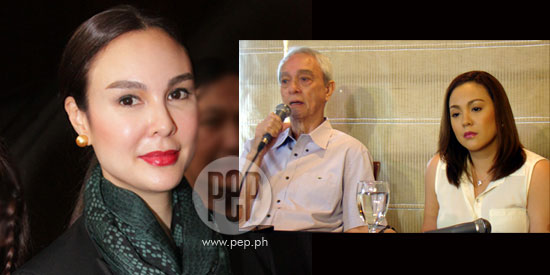 Gretchen Barretto: "Our family has, for the longest time, struggled with the problem of how to deal with Claudine's problem. Sadly, we now recognize that any effort to help her was doomed to fail because my parents are not capable of dealing with the truth. Another example of this is the drug test result they recently showed to the press."

Gretchen Barretto today released a statement responding to the recent tirades that her father, Miguel "Mike" Barretto, made against her in public.

Yesterday, October 1, the 76-year-old Barretto patriarch, making a rare appearance, showed up at the October 1 press conference of Gretchen's sister, Claudine, at the Hotel Rembrandt in Quezon City.

At the press conference, where Claudine countered allegations of drug use made by her husband, Raymart Santiago, Mike Barretto sat at the presidential table, beside Claudine and her two lawyers, and clearly stated where his sympathies lay.

Calling his daughter Claudine his "pinakamabait na anak," he took his daughter Gretchen to task, as well as his children Marjorie and Joaquin Jose or "J.J.," for being "hypocrites" and "bullies" who are guilty of "evildoings."

The patriarch's ire may have been triggered by Gretchen and Marjorie issuing sworn statements which were included in Raymart's counter-affidavit of September 24, which the actor submitted in response to Claudine's complaint-affidavit of August 29 against him.

In the legal saga of the Barretto-Santiago couple, Claudine has accused Raymart of violating the Anti-Violence Against Women and Children Act, and has, following the granting of a Temporary Restraining Order, asked the court for a Permanent Protection Order against her husband.

Raymart has countered with a Petition for Custody of their two children, saying that his wife is a "drug user," and attaching videos of Claudine as evidence.

Claudine then filed a Perjury Complaint against Raymart for allegedly lying in his sworn statement, and, most recently, also filed an Anti Wire-Tapping Law case against him.

The celebrity couple were married to each other twice: a civil wedding in Cauayan, Isabela, on May 2, 2004, and a church wedding in Tagaytay City, Cavite, on March 27, 2006. They have two children, a nine-year-old adopted daughter and a six-year-old biological son.

In Claudine's press conference, before print, TV, and online reporters, Mike Barretto said: “It’s either we are bad parents, kami ng mommy, or we had bad children. Isa sa dalawa ‘yan. Only God will know the answer to that."

Then, clearly referring to Gretchen, Marjorie, and J.J., he added: “Sila, they feel righteous on the outside.

In the course of the press conference, Mike Barretto also justified his decision to side with his youngest daughter:

“At saka, binu-bully nila, e. Palagay ko, part of that is sibling rivalry.

"I’ve been praying always, to make a good decision, to ask God to give me the right decision. But as of now, I just want them to back off.

Last night, October 1, PEP.ph (Philippine Entertainment Portal) reached Marjorie by phone, and got her reaction to her father's remarks about her.

Marjorie’s first sentence was, “I am very hurt with the statement of my father,” before she went on to ask how and when she "ever became a bad child."

She also said that she, Gretchen, and J.J. could not have bullied Claudine because their youngest sister "is a very, very strong woman."

Her sworn statement, Marjorie said, was forced on her by Claudine's complaint-affidavit mentioning her name in two instances. If she hadn't been dragged into the legal battle by Claudine, Marjorie explained, she would not have been compelled to submit any statement to the court.

During PEP's exclusive interview, Marjorie also claimed that her older sister Gretchen has been getting heat from their parents only because the elder Barrettos want to redirect attention away from a big family secret.

Read: PEP EXCLUSIVE Part 1 Marjorie Barretto asks her dad: "When did I ever become a bad child?"

This afternoon, October 2, PEP received the reply of Gretchen, whom we attempted to reach yesterday, via email.

Gretchen has asked that PEP publish her statement in full, as is. Except for paragraph length, which we adjusted for online reading, we are doing so.

I have suffered long and hard in silence all through the verbal, physical, financial and, most painful of all, emotional abuse from my very own parents.

In April 2013, in spite of the attacks on my character from my mother (who publicly disowned me) and Gia Barretto-Reyes (who fabricated stories), I chose to deal with my pain privately.

Today, after the false statements made by my father, I feel I've earned the right to say my piece.

As to whether they are bad parents or they raised bad children—we all know that all children are born good and pure. How they turn out, whether good or bad, will reflect on the parents.

I recall from a very young age my mother saying when asked how many children they have, would say "I have 7 monsters" and maybe in her eyes, we were and still are.

It pains me to be depicted by our parents as the ‘bad children’ who are only out to ‘bully’ Claudine. Everyone knows NO ONE can bully Claudine! No one will dare.

We supposedly envy her success, which our father says, is ‘sibling rivalry.’ Why would we seek the destruction of our sister? What possible benefit does that give us?

We are happy with the lives we have and we are content and happy. But it certainly does not add to our happiness to see this family drama played out in public.

He also said that we should back off. "Tumahimik na kami." But I realized that "puede akong manahimik pero hindi ako matatahimik".

What JJ, Marjorie and I are prepared to do is to defend ourselves from repeated lies, from undeserved attacks, and from the idea that each of us can be sacrificed and that our lives can be ripped apart to promote the illusion that all is well with Claudine.

My father said that Raymart is promoting a lie in exposing Claudine's history of drug abuse.

We are not willing participants in Claudine’s war against Raymart. But she forced us to speak out when she named us in her complaint-affidavit, weaving her tale of ‘abusive sisters.’

And Raymart is telling the truth.

I would like to remind my father that in January 2011, he pretended to have suffered a heart attack and confined himself in Medical City and got my sister-in-law, Connie, to call Claudine at 2 a.m. so she could go to the hospital.

However, that was just a ploy to get Claudine confined at the basement for her severe drug abuse and mental condition.

My brother, Mito, and his wife Connie, their son John, Marjorie and my parents planned and witnessed the confinement.

The following month, Claudine's treatment for drug abuse was continued in a private clinic in Chana, Thailand. After arriving back in the country, she had counseling with Mr. Dondi Ayuyao.

Again, I would like to remind my father of a family meeting that he called Connie, JJ, Marjorie, John and myself to attend at 3 p.m. on December 21, 2012 at Da-Ude Tea Place at the Fort.

He said that he had just come from a meeting that morning with Ms. Eos Capistrano, a counsellor from White Plains who said Claudine needed to be confined at the basement 12-18 months minimum.

And that it was a choice of confining her at the basement or seeing her in the morgue at the rate she's going.

I remind him again that I am just repeating exactly what he said then. My father told us that his choice was to see Claudine in the basement and, of course, we all wanted the same thing.

Our family has, for the longest time, struggled with the problem of how to deal with Claudine's problem.

Sadly, we now recognize that any effort to help her was doomed to fail because my parents are not capable of dealing with the truth. Another example of this is the drug test result they recently showed to the press.

We did not reject our parents. They rejected us.

Sadly, they mistake our concern as envy, and our refusal to support their lies as betrayal.

Whether they believe it or not, we care for Claudine.

In my quiet moments, I am in desperate search of that Claudine.

Our hardworking and successful baby sister who brought so much pride and joy to the family.

In a perfect world when I dream everything and anything is possible, I'd like to believe that I can see the vibrant, loving, caring, generous and beautiful Claudine, come back.

I believe that it is up to my parents to own up to the truth to make this possible.

It is not important now to point fingers as to who, what, why.

We do not need to cover up anyone's stories or put up a front to avoid shame.

We are beyond that.

We hear Claudine's cry for help. Why can't you?