PEP EXCLUSIVE Anne Curtis survives embarrassing night out with friends; says sorry and is forgiven, all on the same day 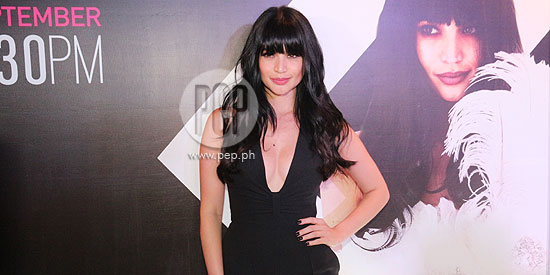 From Anne Curtis to JR Isaac: "Just want to apologize for my behavior! I'm so so so sorry. I'm so ashamed..." From JR to Anne: "Apology accepted."

The Philippine Entertainment Portal received a feed from a reliable source today, December 1, about an incident reportedly involving top celebrity endorser and star Anne Curtis, on the one hand, and other celebrities, including John Lloyd Cruz, on the other.

The feed said that Anne, in the early morning hours of Saturday, November 23, had harangued some guests at a luxury club, slapped three of them, and announced that she could afford to buy everyone there, even including the club itself.

The PEP source said that he had attended a meeting and "everyone there was talking about it." The source also mentioned that the story had apparently been circulating for several days.

PEP lead correspondent Nerisa Almo, identifying herself, turned to Twitter to ask if Anne could follow back Nerisa's account, saying she wanted to send a private message to the star. (At press time, there was no word from Anne.)

Nerisa soon followed with a call to Anne's mother company, Viva Entertainment, where Nerisa spoke to Ferlin Buenviaje, who said she would have to refer us to another Viva officer.

Meantime, Nerisa called the Viva Artists Agency, which handles Anne's career, and got hold of Anne's handler, Therese Ramos. Therese, saying she knew nothing about any incident, said she would call Viva executive Veronique del Rosario-Corpus. (At press time, there was no word from Viva.)

Nerisa also used Twitter to connect to actor, host, and club owner JM Rodriguez, one of the celebrities reported to have been on the receiving end of Anne's harangue. (At press time, there was no word from JM.)

Nerisa had yet to find a line to John Lloyd Cruz.

Finally, PEP's editor-in-chief Jo-Ann Maglipon got hold of JR Isaac, another celebrity said to be directly involved in the incident.

Although clearly surprised to get a call from PEP, JR—saying, "I'm not hiding anything"—answered PEP's questions.

THE INCIDENT. JR Isaac is in his forties, and is currently the editor and publisher of Circuit Magazine, a free city-life guide providing information on parties, places, and events.

He is also engaged in boutique advertising and remains a creative consultant for events, which makes him a rather connected fellow, something that he admits he is.

He says that last November 22, "a typical Friday night," he and some friends were at a favorite hangout, the Privé Luxury Club, located in The Fort Strip at the Bonifacio Global City complex, Taguig City.

They were on the club's second floor, in the VIP section, one half of which had been cordoned off that night for a private party. That private party, it turned out, was a bachelorette affair hosted by Anne Curtis for a girlfriend about to get married.

The layout of the VIP floor, explains JR, is such that the toilet was shared by the guests on that floor. The toilet entrance was also near the VIP bar. JR adds, "If you're going to the toilet, you have no choice but to pass near the cordoned-off area."

He relates the seconds leading up to the incident.

"Leah and I are just between the toilet door and the bar. I think I was standing and waiting for my drink, talking to Leah.

"Then we heard a loud voice saying, 'Who's banging my door?' We didn't know who or where it was at first! Just loud, coming from behind us. When we turned around, we saw, stepping out of the toilet, Anne, very mad.

"This all happened so fast. Anne was making so much noise, shouting at JL: 'You are an addict!'

The next thing JR remembers is that Anne had turned her ire on Phoemela, and said, "You, what are you doing here?"

JR continues, "Anne screamed, with finger pointing at Phoem the whole time, like she pointed it at JL. She had all this rage, she was agit [agitated].

"She was drunk but, di ba, when you're drunk, you're wobbly? She was not wobbly. She was strong, parang she could hurt us all!

"Anne screamed, with finger pointing at Phoem Baranda, saying, 'I can buy you, your friends, and this club!'

Asked to recall how he and his friends Leah and John Lloyd—the three who had been slapped—reacted, JR says: "Shocked! We didn't know how to retaliate. Wala.

"I was ushered away. I was trembling. They calmed me down.

"A lot of people saw the whole thing. I had never been slapped like that before. I didn't know what to do.

"The management and [club] PR all came to our table and apologized to us. They saw the whole thing. They know we were the ones slapped.

"In the end, we stayed. We didn't allow it to ruin our night.

"Then, minutes after the commotion, I saw Anne escorted out. We, we stayed. We had been coming here so many times! Anne was not a regular, so why should we let her make us leave?

"But we didn't want to talk about it. It was a relaxed night with friends."

FILLING IN THE GAPS. JR adds that it was several days after when some of the others told him what he had not caught that night.

"Leah told me that she grabbed Anne's hand—Anne's right hand—and told her, 'Why are you slapping us? Stop slapping us! You're not being cool.'

"Leah—you know, she's from Globe—also told me that JM was able to answer back, because me, I was in shock.

"She told me that Anne said to JM, 'You know, this is the worst club to have a party!'

"JL never said anything the whole time. He kept quiet. He was a gentleman, like I said. Jake? I don't know where Jake was. I don't know anymore, maybe he didn't witness what happened? Commotion na!"

Eight days after the incident, JR muses, "When people ask why I didn't do anything, I just say... I was too shocked, I'm not used to that."

Then, referring to Anne's supposed drunken state, he says, "You know, it's not an excuse. Your basic character shows when you're intoxicated.

"People at the club and those who ask me, they ask if she was on something. I don't know. It's done anyway. I've forgiven her."

ANNE'S APOLOGY. JR says that the incident must have lasted less than an hour, between the hours of 1 a.m. to 2 a.m. of that Saturday, November 23.

When he woke up, it was towards late afternoon of Saturday. He saw that many texts and calls had come in. Word on the incident had spread.

As he tells PEP, "I can only guess that it was because there were so many witnesses, guests of the club, that night. And remember, I wasn't the only one slapped.

"And each of us has friends, who tell friends, ang dami na! I found out we were all receiving texts, calls, about the same time. All asking if it was true."

Also that same day, at about 4 p.m., JR says he received a text message from Anne. It said (published as is):

"JR! It's Anne. Got your number from Monique! Tried messaging you on Facebook this morning. Just want to apologize for my behavior! I'm so so so sorry. I'm so ashamed

would never act like that in the right state of mind! I'm so sorry. Please forgive me!"

JR says he answered, also by text (published as is):

"Hi Anne, just woke up and read your text. Apology accepted... On a lighter note, you owe me a tight hug!!! Going back to sleep, nursing my hang over."

PEP asks JR if there had been bad blood between him and the movie/TV star before this, and he answers, "None. None. We know each other way back! Both of us, we were batchmates in Metro Body Shots, around 2004 or 2006. I escorted her once in a Mega event, and she became cover pa of Circuit! So, socially noon pa."

He also says that, although the last time he was with Anne was around two years ago—"at a Century Tuna event in Boracay, she's an endorser"—he has had no history of a skirmish with her before, during, or after the November 23 incident.

When PEP suggests that JR has no anger in his voice and that he seems to have forgiven Anne quickly, the fellow answers, at once seriously and lightly: "Never harbor ill feelings. It's bad for the skin."