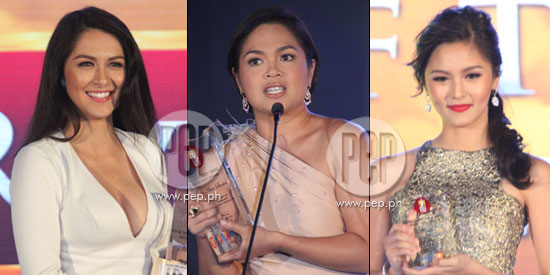 (From left) Marian Rivera, Judy Ann Santos, and Kim Chiu are three of the biggest winners in the 1st PEP List Awards held last night, May 20, at the Grand Ballroom of Solaire Resort & Casino.

The warring networks set aside business for the inaugural PEP List Awards last night, May 20, at the Grand Ballroom of Solaire Resort & Casino in Parañaque City.

ABS-CBN, GMA-7, and TV5 stars brightened the glamorous event that recognized the who’s who in Philippine showbiz.

Ai-Ai delas Alas and Lucy Torres-Gomez were the hosts of the evening's ceremony that handed out 52 awards.

Prior to the program proper, livestream hosts Giselle Sanchez and Candy Pangilinan talked to the celebrities at the red-carpet of Solaire’s Grand Ballroom.

Kapamilya, Kapuso, and Kapatid stars opened the evening presentation with a Great Gatsby-inspired dance number—two stars from each netwok.

They were Bangs Garcia and Robi Domingo for ABS-CBN, Winwyn Marquez and Sef Cadayona for GMA-7, and Eula Caballero and Vin Abrenica for TV5.

PEP LIST WINNERS. The PEP List is divided into three components: the PEPsters’ Choice, the Audited, and the Editors’ Choice.

The PEPsters’ Choice winners were previously announced via a press conference held last March 27 at the Mango Tree, Bonifacio High Street, The Fort.

“Aling Maliit” Ryzza Mae Dizon received her glass trophies for being the Female Child Star of the Year in the PEPsters’ Choice as well as the Editors’ Choice category.

Elmo Magalona and Julie Anne San Jose received their awards as Teen Stars of the Year as chosen by PEPsters.

Xian Lim and Lovi Poe were hailed by PEPsters as the FAB awardees.

Xian thanked PEP not just for the recognition but also for being fair in reporting.

The Kramer family—couple Doug and Cheska and their children Kendra, Scarlett, and Gavin—came in full force that night to receive the award for starring in the Most-Watched PEPtalk episode.

Doug said in his message, “Thank you to PEP and thank you to all the Team Kramer fans and supporters.”

Chesca added, “To God be the glory!”

Tom said Dennis Trillo, his partner in My Husband’s Lover, was unable to attend the awards night as he was sick that night. Tom accepted their trophy as Celebrity Pair of the Year.

He was also recognized as the Breakout Star of the Year in the Editors’ Choice category.

He thanked his former network, ABS-CBN, and his current TV station, GMA, for helping him become the star that he is now.

“I want to thank ABS-CBN for giving me my start because without them, I wouldn’t be in the industry right now.

"My biggest gratitude goes to GMA for giving me my biggest break in my whole career.

"For my whole MHL [My Husband’s Lover] family, thank you for showing me the true meaning of teamwork.”

Vic Sotto was unable to attend but he sent a video message expressing his gratitude for winning the Male TV Star of the Year award in the PEPsters’ Choice and Editors’ Choice categories.

MOST AWARDED. Kim Chiu emerged as the big winner that night as she went up the stage several times to receive her awards.

She shared the stage with Xian Lim when they accepted the Celebrity Pair of the Year award in the Punongbayan & Araullo-Audited category.

The tandem of KimXi also accepted the trophy when their show Ina, Kapatid, Anak was announced as the Primetime Teleserye of the Year in the PEPsters’ Choice category.

NEWSMAKERS. When Korina Sanchez presented the awards for Male and Female Newsmakers of the Year (Audited category), she pointed out that these awards were given to “the stars whose statement, every move, every post become of much interest to the public.”

Claudine Barretto won in the Female category but she was unable to attend the awards night. Cholo Barretto accepted the trophy on behalf of his aunt.

“On behalf of my ate, thank you very much.

"You guys talking about my family is not a big deal for us but acknowledging an award is very important because it boosts our spirit to become whole again one day and for that, thank you very much,” said Claudine’s nephew.

The Male Newsmaker of the Year award went to Claudine’s estranged husband Raymart Santiago, but he was also unable to accept the award that night.

When Judy Ann Santos received the award, she told the crowd: “Sabi po nila, parang Darling of the Press [award].

"Thank you for giving me the chance to be me.”

TV STARS OF THE YEAR. Marian Rivera and Vic Sotto were named as Female and Male TV Stars of the Year, respectively, in the Editors' Choice category.

Ms. Jo-Ann Maglipon described Marian as the “actress who is versatile in drama, action, and comedy. She also dances very well.

"She has remained visible even after her soaps have ended. She is the primetime queen of GMA.”

THUMBS UP. Dingdong Dantes, Yes Pinoy Foundation founder and chairman, received a Thumbs Up! Award for his advocacies.

Presenter Andrea Torres explained: “This award goes to celebrities who selflessly devoted their time, efforts, and even money to those who are less fortunate.”

Angel Locsin, Piolo Pascual, and Sharon Cuneta were also given the award for their socio-civic efforts but only Dingdong showed up to receive his Thumbs Up award in person.

He came all the way from Pampanga to attend the PEP List Awards.

“Thank you for this recognition,” said the Kapuso Primetime King.

“Mas nakakagana gumawa ng mas marami because of taps on the back like this.”

NATIONAL TREASURES. Nora Aunor was named the Female Showbiz Treasure awardee in the PEPsters' Choice category, and her trophy was received by director Mac Alejandre that night.

Joey de Leon brought the house down when he accepted his trophy for being the Male Showbiz Treasure awardee in the PEPsters’ Choice category.

Ai-Ai was recently unveiled as the endorser of the vaginal tightening procedure.

“Yung kina Claudine at Raymart kanina [recipients of the Female and Male Newsmakers of the Year awards], may banat si Allan K, dapat siya raw ang Nosemaker of the Year!

INDEPENDENT AUDIT. The PEP List Awards night was the result of year-round deliberations.

As an award-giving body, PEP.ph (Philippine Entertainment Portal) was the first to tap an independent auditing firm to tabulate and verify the results—Punongbayan & Araullo Associates.

She said, "We think that after seven years covering the industry, we have earned the right to come out with an awards list.

"And we wanted this so special so we had this independently audited."

She said that the long-term goal is to come up with a list that PEP hopes will become the reliable showbiz meter.

GRATEFUL. In her welcome remarks during the program proper, Jo-Ann briefly tackled the PEP List's inception.

“As an online entertainment news site, we actually got to the point when we thought that—we hope, rightly—that we have earned the right to give out awards.

“We finally found a grand way to recognize the rigorous and plain hard work that goes into a blossoming and successful showbiz career.

“Putting all these big reasons together, we in PEP have decided to have this one night.

“Thus, we decided to have the awards independently audited. Partnering with the Punongbayan and Araullo auditing firm, we searched our site for the most viewed articles, the most-read articles…

“The PEP List we present tonight is the result of this partnership so that we owned this list, we did not manufacture them.

“We let the numbers fall where they may.

“Thus, as we gather tonight, we offer the PEP List as our thanks and tribute to the entertainment industry.

“This is us at our most grateful. Again, welcome and enjoy the evening.”

Celebrity Pair of the Year - Tom Rodriguez and Dennis Trillo

The Punongbayan and Araullo-Audited Category

Celebrity Pair of the Year - Kim Chiu and Xian Lim

Most-watched PEP Talk Episode - Doug and Cheska Kramer talk about their fights that never went beyond one night.

Face of the Year - Anne Curtis

TV Show of the Year (Primetime) - My Husband’s Lover (GMA)

Stringer of the Year - Jojo Gabinete