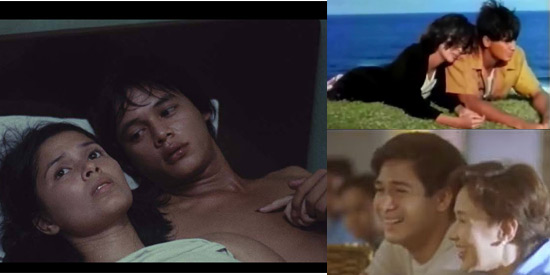 From The Great Gatsby to The Hunger Games, classical literature and popular novels have been a source of inspiration for Hollywood movies. Producers of Filipino movies have also turned to local bestsellers to find a source of material for stories. Some of the most critically acclaimed Pinoy films have been based on novels.

Meanwhile, Kathryn Bernardo and Daniel Padilla are set to star in the film adaptation of Bianca Bernardino’s romance novel She’s Dating the Gangster, which is expected to open in cinemas by July 16.


Enchong Dee and Erich Gonzales will also topbill the movie adaptation of the book Once A Princess, which is considered one of the bestselling Precious Hearts Romances (PHR) titles.

Yet another Wattpad story-turned-movie is Talk Back and You’re Dead, which will pair James Reid and Nadine Lustre anew after starring in Diary ng Panget.


Since this seems to be an emerging trend in the local film industry, let’s take a look at notable book-to-film adaptations in Philippine cinema.

The protagonist of the story is 21-year-old probinsyano Julio Madiaga (Bembol Roco) who goes to Manila to search for his love, Ligaya Paraiso (Hilda Koronel). Working as a construction worker and living in hard conditions, Julio struggles to survive in the dark and foreboding city. When Julio is later reunited with Ligaya, he discovers that she had been lured into a life of prostitution.

A digitally restored version of Lino Brocka’s masterpiece premiered at the Cannes International Film Festival on May 2013. The film showing was preceded by a pre-recorded message from Martin Scorsese, in which he called Brocka a “giant” whose films were “brave, extraordinary, powerful experiences.”

Mike de Leon’s groundbreaking film, Kisapmata, was inspired by Nick Joaquin’s 1986 article titled “The House on Zapote Street,” which was included in Reportage on Crime, an anthology of Filipino crime stories. Joaquin’s article was based on the true story of the Cabading family.

Mila Carandang (Charo Santos) and her mother Dely (Charito Solis) are dominated by the family patriarch Dadong Carandang (the great Vic Silayan). A retired police officer, Dadong is extremely jealous of Mila’s suitors. Mila falls in love with Noel Manansala (Jay Ilagan) and seeks her father’s permission to get married. She also learns she is pregnant. Dadong insists that the couple stay in his house even after they are married. After months of living in misery, Mila and Noel escape the house. But Dadong will not let his daughter go. The film ends in tragedy with a murder-suicide and the revelation of a dark family secret.

Nora Aunor is lauded by critics in this movie adaptation of Lualhati Bautista’s novel titled Bulaklak sa City Jail. In fact, the Superstar won a Best Actress trophy for the movie that was directed by the late Mario O'Hara.

The film shows the cruel world of a women’s prison where physical and sexual abuse takes place.

Nora is cast as a nightclub singer who is imprisoned for attempted murder. When she learns that she is pregnant, she escapes prison and delivers her baby inside a lion's den (in Manila Zoo) while being chased by policemen.

Celia Rodriguez and Perla Bautista also give memorable performances in the film. Celia’s character becomes a prostitute inside the prison so she can financially support her son while Perla’s character is compared to Sisa for losing her sanity when her child is taken away from her.

Carlos Siguion Reyna’s Hihintayin Kita sa Langit was a Filipino adaptation of Emily Bronte’s classic novel, Wuthering Heights. Instead of the Yorkshire Moors, the setting was transposed to beaches and cliffs (the film was shot mostly in Batanes).

Gabriel (Richard Gomez) was a street urchin who was plucked from the streets of Manila by Joaquin Salvador and adopted into the family. Milo (Michael de Mesa), Joaquin’s real son, resents Gabriel and competes with him for his father’s love and attention. After an altercation with Gabriel, Milo is sent to Manila.

Gabriel eventually falls for Joaquin’s daughter, Carmina (Dawn Zulueta). When Joaquin suddenly dies of a heart attack, Milo returns as master of the house. Gabriel is reduced to the status of a servant. Wanting to marry up, Carmina weds Alan (Eric Quizon), the wealthy scion of the landowning Ilustre family. Gabriel returns years later, rich and educated, and sets about gaining his revenge on the two families that he believed ruined his life.

Lualhati Bautista’s novel is about the role of women in a patriarchal society. Lea Bustamante (Vilma Santos) is a women’s rights activist and the mother of two kids with different fathers. Her children – Ojie (Carlo Aquino) and Maya (Serena Dalrymple) – are growing up. Lea struggles to provide for her family and keep up with her hectic job at the women’s crisis center. Ojie’s father, Raffy (Ariel Rivera), returns to his son’s life and plans to take Ojie to the United States to live with him and his new wife. Lea fears that the fathers will take away both her children.

This sex-drama about a womanizer is based on the book Laro sa Baga by Edgardo Reyes (who also served as the scriptwriter of the movie directed by Chito Roño).

Ding (played by Carlos Morales) is a promiscuous painter. He tells the story of his life and how it was shaped by three women including his godmother (played by Angel Aquino), her adopted daughter (played by Ara Mina) and his wife (played by Monique Wilson).

The film features full-frontal male nudity and a shocking scene where Monique Wilson’s character cuts off Ding’s manhood while he is sleeping.


Tatarin is based on National Artist for Literature Nick Joaquin’s short story “Summer Solstice.” It was directed by Amable "Tikoy" Aguiluz VI from a script by renowned screenwriter Ricky Lee.

Set in the 1920s, Tatarin depicts the transformation of Dona Lupeng (Dina Bonnevie), from being a submissive wife into a woman who rebels against her husband Don Paeng (Edu Manzano).

The story revolves around an ancient pagan ritual wherein women dance erotically around a balete tree. Rica Peralejo and Chin Chin Gutierrez can also be seen dancing and gyrating in wild abandon for the fertility ritual done during St. John’s festival.

Lualhati Bautista’s Palanca Award-winning novel Dekada ’70 tells the story of the Bartolome family, an ordinary middle-class family in 1970s Philippines, and delves into how they became aware of the political policies that ultimately led to state repression and Martial Law.

Amanda Bartolome (Vilma Santos) and Julian Bartolome, Sr. (Christopher de Leon) try to keep their family intact in the midst of authoritarian rule. But conflicts arise when their children become socially active in opposing the Marcos administration. Jules (Piolo Pascual) becomes an activist and joins the underground movement. Gani (Carlos Agassi) enlists in the US Navy. Eman (Marvin Agustin) works as a political writer. Jason (Danilo Barrios) is victimized by corrupt policemen. Their youngest son, Bingo (John Wayne Sace), remains a carefree adolescent. The novel and film explores the political chaos of the time period and the relationship between family and society.

Cult favorite Zsazsa Zaturnnah has become a pop culture icon for the gay community. The character first appeared in Carlos Vergara’s graphic novel Ang Kagila-gilalas na Pakikipagsapalaran ni Zsazsa Zaturnnah. Not long after the graphic novel’s publication, a hit musicale was staged. Regal Entertainment then bought the rights to produce a film based on the musicale.

After experiencing heartbreak, Ada (Rustom Padilla) takes his beauty parlor and his niece to the province to start a new life. One night, while singing in the shower, Ada is hit on the head by a strange pink meteorite with the word “Zaturnnah” etched on it. His assistant Didi (Chokoleit), a fan of Darna comics, believes the stone will give Ada super powers. Ada swallows the stone and is transformed to Zsazsa Zaturnnah (Zsa Zsa Padilla), a red-haired superheroine reminiscent of Wonder Woman and Darna.

Stay tuned for Part 2 of this list featuring Pinoy movies based on books.


What movies with literary inspirations do you want to include? Share your thoughts in the comments section below.