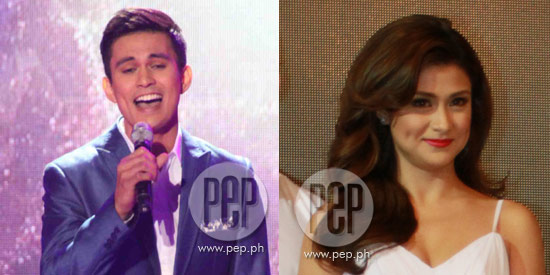 The audience was treated to an unexpected treat when Carla Abellana was spotted at the Meralco Theater during the finale of the 2014 Philpop songwriting competition.

In a brief interview with event hosts Iya Villania and Christian Bautista, Carla was asked what she thought of the songs so far.

"I have to be honest I haven't heard all the entries pero that's why I'm here, I'm looking forward to listening to all them kasi so far ang gaganda, I like Salbabida, Qrush on you, Torpe... ang gaganda ng meaning nung songs they are all beautifully sang so looking forward ako na marinig the rest," said Carla.

Why was she there? Iya Villania probed: "Sa ka-busyhan mo, but may time ka pa manood dito…"

"It's a miracle today's my free day," answered Carla.

Christian Bautista brought to Carla's attention that Tom Rodriguez was one of the interpreters set to perform later that evening. He then asked Carla’s wish for her co-star in the GMA teleserye My Destiny.

The kilig was palpable in the air as fans of the two erupted into cheers upon hearing her answer.

In a recent interview with PEP.ph, Carla denied rumours about her secret relationship with Tom.


As for Tom, he has recently hinted that he is “trying” to court Carla.

During the Philpop competition, Tom took the stage as seventh performer of the night with his interpretation of Ronaldo "Toto" Sorioso's song "Langit Umaawit."

According to the composer, his song “Langit Umaawit” was meant to romanticize the moment when you realize that you have found "the one."

Aside from this entry, Toto also had another entry that entered the Top 12 of the songwriting competition. Toto’s “Awit Mo’y Nandito Pa” was interpreted by Aldrich Talonding and his cousin James Bucong.

Kapuso hearthrob Tom took to the stage and serenaded the audience with his rendition of “Langit Umaawit.”

During his performance, he would steal glances at Carla and smile at her, much to the delight of their fans.

There were also moments when the camera would focus on Carla who was all smiles while watching her onscreen leading man sing onstage. In fact, the actress was on her feet and had her phone out to record Tom's performance and take pictures as well.

However, in the end, Tom did not win in the competition.