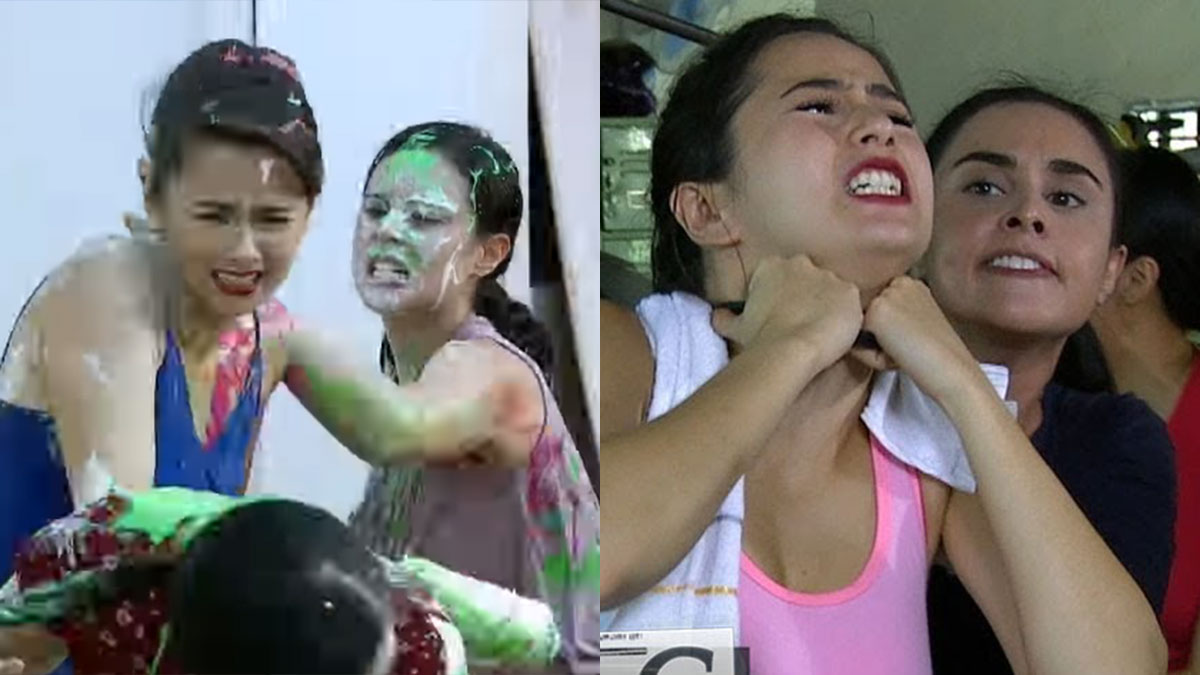 What is your most favorite fight scene from Bihag?
PHOTO/S: Bihag (GMA-7)

Bihag revolves around a couple, Jessie (Max Collins) and Brylle (Jason Abalos), whose lives were changed by Reign (Sophie Albert), a woman who kidnapped their child and became Brylle's mistress.

Being an infidelity-themed drama series, Bihag showcased several fight scenes between Max and Sophie, along with their sidekicks played by Jade Lopez and Nicole Donessa.

With Bihag's impending finale, PEP.ph (Philippine Entertainment Portal) lists down 15 of the outrageous catfight scenes between the girls of the Kapuso drama series and the weapons the characters used to hurt each other.

1. Jessie and Reign's catfight at the stairs

Jessie set up a dinner with her husband Brylle and Reign, who introduced herself as Marie, a good friend of Jessie.

Later on, Jessie discovered that Marie is actually Reign, the mistress of her husband.

While having dinner, Jessie revealed that she already knew the secret, and splashed red wine at Reign's face.

She then slapped Reign's face.

Reign was trying to stop Jessie, and warned everyone from laying a hand on her. Jessie answered, "Well, my darling, there's a first time sa lahat," and slapped her again.

After their confrontation, Reign ran to the stairs of the restaurant, but Jessie caught up with her.

Jessie pushed Reign towards the stairs, but Reign pulled Jessie's hand, causing them to both fall.

The two rivals slapped each other until security guards arrived and Brylle stopped the commotion.

Jessie then called Reign a snake.

Jessie got so angry over Reign's statements that she broke a bottle of wine and pointed it at Reign's face.

Reign begged her not to put a scar on her face. Jessie then said, "Lumayas ka dito bago kita patayin!"

Reign was about to meet Brylle in a food park. However, she was surprised to see that Jessie was also there.

Reign thought that Brylle would finally break up with Jessie for her. However, Brylle said that he regrets having a relationship with Reign.

Seeing that what Brylle did was not enough to humiliate Reign, Jessie asked Brylle to stand up and announce that he is breaking up with Reign.

Reign stood up and tried to slap Jessie but she stopped her. Reign then splashed juice on Jessie's face.

Jessie and her friend, Lisa (Jade Lopez) bumped into Reign and her cousin Martha (Nicole Donesa) while in front of a construction site.

Jessie then gave Reign a crisp "mag-asawang sampal" by slapping each cheek.

Martha was shocked by what she witnessed and remarked, "Grabe, ang lutong no'n, ha!"

When Jessie turned her back, Reign grabbed a paint roller and slammed it on Jessie's face.

The four of them then threw paint at each other until security guards stopped them.

Lisa and Jessie were strolling at a park when they came across Zumba dancers, and decided to join them as a stress reliever.

As fate would have it, Reign and Martha were jogging at the same park.

Reign and Martha were supposed to continue jogging but Lisa chased her and pulled her hair.

Jessie got so angry over Reign's comments about her stretchmarks that she gave another mag-asawang sampal to Reign.

Upon hearing Reign's words, the Zumba dancers confronted her, especially when Lisa told them that Reign is a mistress.

The Zumba dancers then swarmed around Reign and Martha and physically assaulted them!

This catfight started when Jessie and Lisa bumped into Reign and Martha at the hospital, thinking that Reign is visiting Brylle again.

Martha said that Jessie has become paranoid, causing her to get slapped by Lisa.

When Reign and Martha were about to leave, Jessie pulled Reign's hair and a catfight ensued among four of them.

Jessie put Reign in a wheel chair and continued pulling her hair.

In retaliation, Reign grabbed a poster from the hospital's bulletin board and slammed it against her enemy.

After they were pacified by security guards, Lisa told Reign and Martha, "Ano 2-0 score? Bawi kayo next time, ha!"

Jessie was blamed for the death of Brylle's mother, causing her to get imprisoned.

Reign, who was the real culprit behind the murder, visited Jessie in jail to insult her nemesis.

When Jessie called Brylle her "asawa," Reign said that it won't take long before they get annuled.

To get back at Jessie, Reign punched her in the face. In response, Jessie pulled Reign's hair.

As policemen tried to pacify them, Jessie and Reign both grabbed monobloc chairs and hit each other with the chairs, until Brylle arrived and was able to stop them.

7. Jessie catches Reign and Brylle making love on her bed

After Jessie got out of jail, she temporarily left Brylle in their house.

She then received a message showing Reign and Brylle making love on Jessie's own bed.

Upon entering the bedroom, Jessie pulled Reign's legs, and kicked Brylle in the balls.

She then slapped Reign's face.

Jessie pinned down Reign and strangled the mistress who made the request: "Kung gusto mo ng away, pagbihisin mo ako. Lugi ako!"

Jessie then asked her maid to enter the room and cover Reign's head with a sack.

Reign ran away from Jessie and Brylle covered her with a blanket.

As Reign ran out into the streets, Jessie's maids tripped her and insulted her.

Reign then grabbed a walis ting-ting and hit the maids.

While Reign continued running in the streets, Jessie's neighbors also insulted her for being a mistress.

Jessie's neighbors then started throwing watermelons at her.

Jessie was reminiscing her memories with her missing son, Ethan, at the swimming pool of her son's school.

Reign arrived and called her a "miserable witch."

Jessie was blaming Reign for what happened to her child, especially when she found out that Reign was an owner of the school where Ethan got kidnapped.

Reign became so angry that she tried to submerge Jessie's face into the water.

Jessie stood up and pushed Reign, causing her to fall into the pool.

Lisa then told Jessie, "Tara, Jessie, baka maka-ahon pa yan. I don't want to be in the same pool with her, maraming bacteria yan!"

Jessie and Lisa were about to enter a gym when they saw Reign and Martha from afar.

Inside the gym, Reign and Martha were chatting about Reign's plan to end Jessie and Brylle's marriage.

Reign said, "I'm a problem solver, I make problems and I solve them."

Apparently, Jessie was listening to them. Reign was surprised when someone threw a big gym ball at her.

Reign called her enemies bitter, and defended mistresses while calling herself an angel in disguise.

When Jessie said yes, Reign pushed her towards a ski machine. Jessie grabbed a piece of rope and strangled Reign.

The guards stopped them by saying that they weren't members of the gym.

Jessie caught Reign and Brylle hugging each other at a bar.

Jessie then revealed Reign's secrets to Brylle. Brylle's disappointment caused him to walk out.

When he left the two girls, Reign insisted that she is innocent.

A catfight between the two ensued. Reign pushed Jessie, and tried to throw a bottle at her, but Jessie was able to use a serving tray as shield.

Reign then grabbed a knife and tried to stab Jessie, but Jessie hit her with the tray, causing Reign to stumble and stab herself.

Reign was celebrating her birthday with Brylle when Jessie arrived to tell Brylle that Ethan is still alive.

Reign did not believe Jessie's claim, saying that Jessie was just inventing stories.

Reign was angered by Lisa's words and slapped her.

Reign still insisted that Jessie was making up stories to earn Brylle's attention.

Reign's insults took its toll on Jessie, causing the latter to grab some spaghetti noodles and smash them on Reign's face.

As revenge, Reign threw spaghetti noodles at Jessie's face, while Martha and Lisa also hurt each other with balloons.

At a restaurant, Jessie and Larry (Mark Herras) were about to dine together when they saw Reign and Brylle who were also there at the venue.

Larry and Brylle had to go out after security guards called them regarding their vehicles.

When the boys left the two girls, Jessie started insulting her husband's mistress.

The confrontation ended with a catfight between the two girls.

Jessie and Lisa rushed to Reign's house to confront Martha after giving a tip to the police about Ethan's whereabouts.

Jessie and Lisa did not believe it when Martha said that it was just a prank.

Reign arrived and stopped them from beating Martha.

Reign and Jessie then saw gardening tools and grabbed them to use as weapons to fight each other. Reign got gardening shears, while Jessie got a small rake.

Later, Jessie was able to steal the garden shears and almost stab Reign, but Lisa and Martha both stopped her from committing a crime.

Jessie and Reign had another encounter at a children's party, after Reign caught Jessie looking for Ethan.

To stop her from seeing Ethan alive, Reign started a catfight with Jessie. Jessie threw party giveaways at Reign, while Reign hit Jessie with balloons.

Security guards tried to stop them, but the ladies were so strong that they simply pushed the guards away, and continued hurting each other.

Jessie caught Reign at Brylle's clinic, where Reign said that Brylle is about to file a case against her.

Jessie also said that Reign is "tuwang-tuwa" to destroy things and relationships.

She then slapped Reign and punched her again and again.