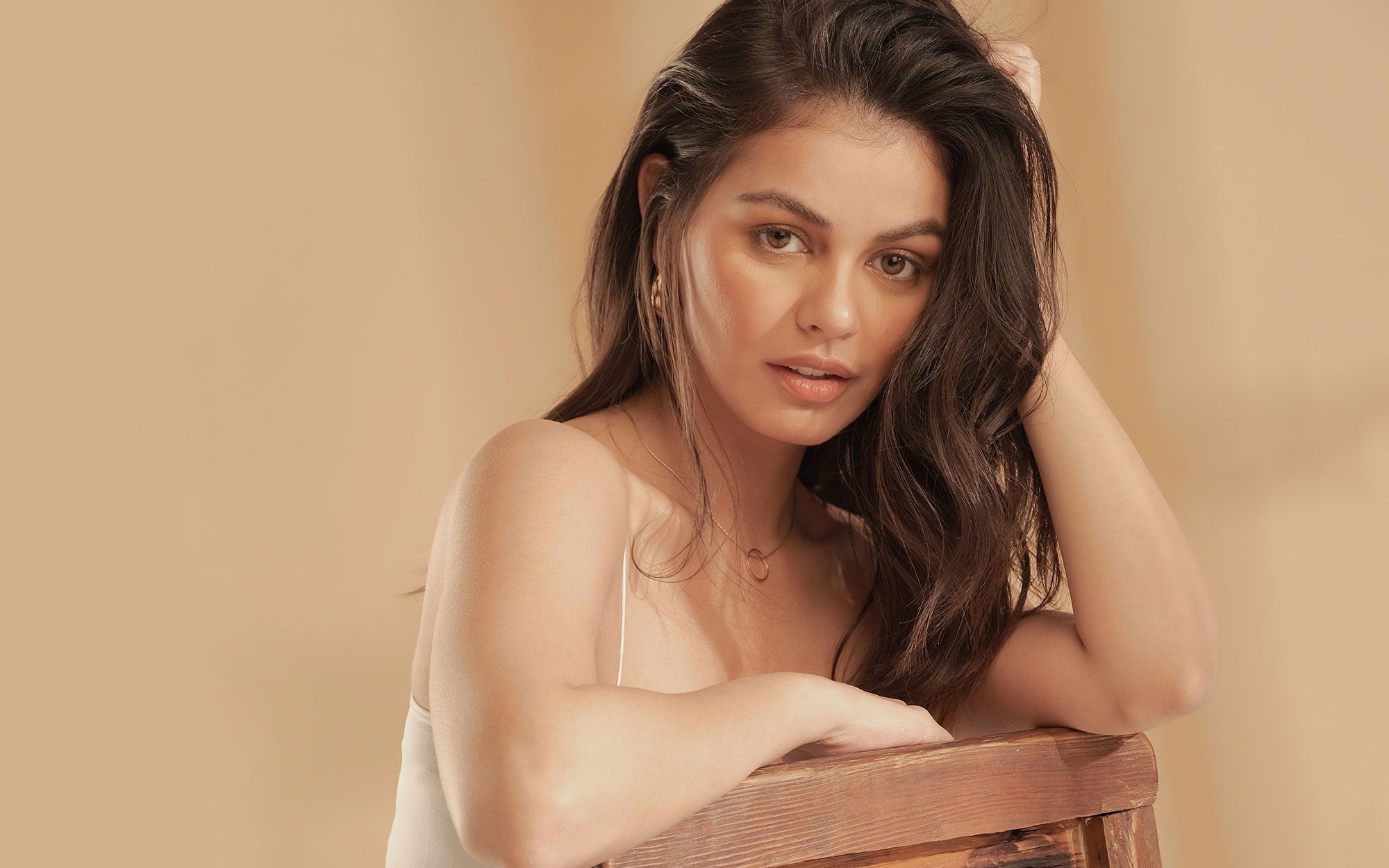 Lifestyle
Janine Gutierrez: In a League of Her Own 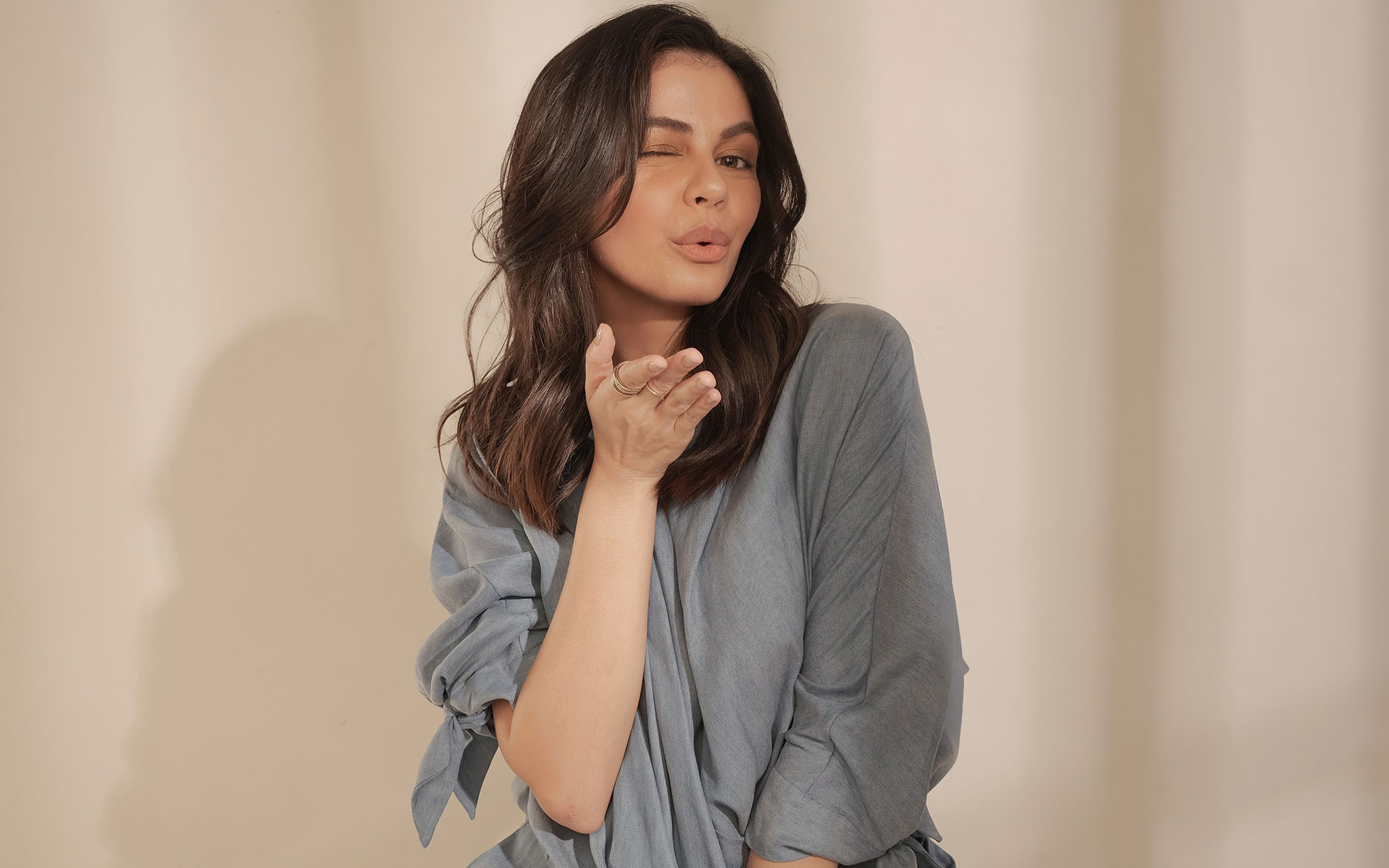 Janine Gutierrez was 21 years old when she began her career as an actress.

In industry years, this may be considered a late entry, especially since her showbiz contemporaries—Kathryn Bernardo, Liza Soberano, Nadine Lustre, Maja Salvador, Kim Chiu—got their headstart much younger than that.

After all, the 29-year-old Kapuso star knew that she shared the same narrative as her idol, actress and endorser KC Concepcion, unica hija of Gabby Concepcion and Sharon Cuneta. 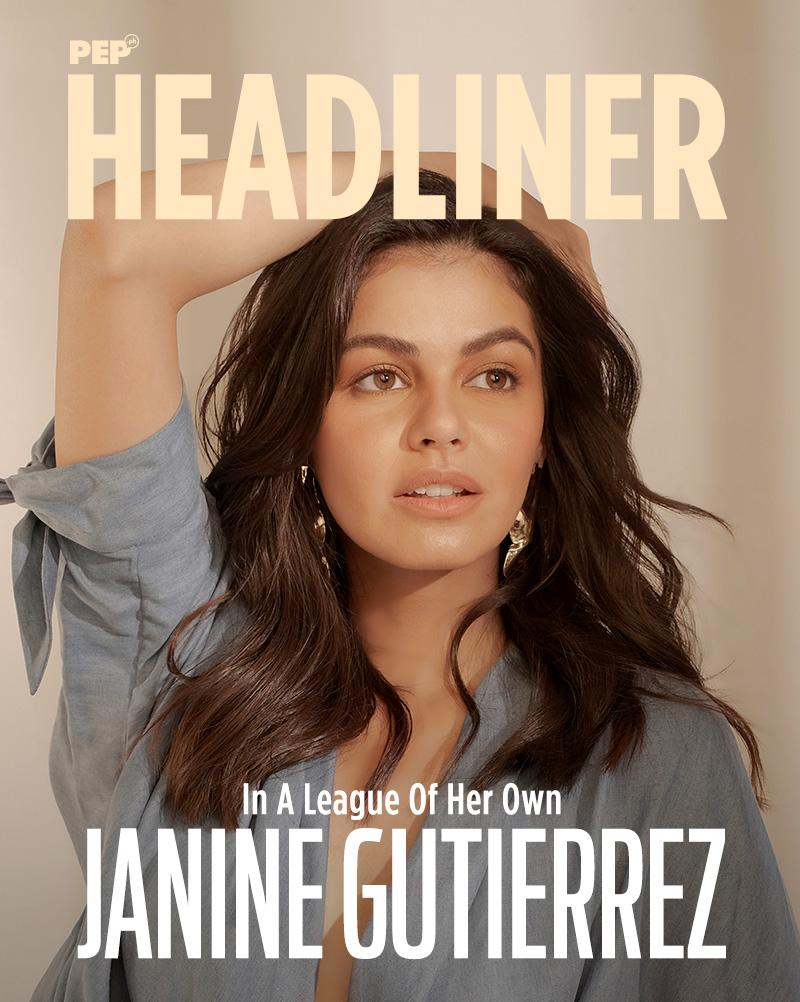 A graduate of European Studies in International Business, Janine eventually finished her studies at the Ateneo de Manila University first before venturing into acting.

This was exactly what her mom wanted her to do, even if her star-studded family actually got her confused at one point.

"So, litong-lito ako... but then, there's really no formula. Either way works, depending on what you want."

Janine is part of the huge De Leon and Gutierrez celebrity clans. 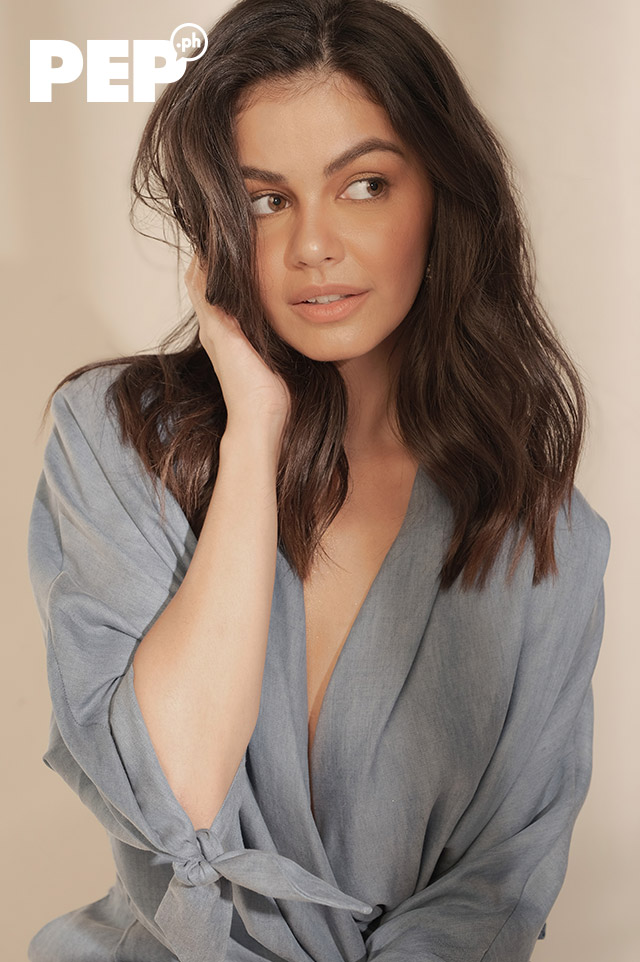 Despite her showbiz roots, however, it took a while for Janine to figure out what she wanted to do with her life.

In fact, she really had no plans of following their showbiz path.

"Ako kasi, I didn't know what I wanted to do.

"Or maybe, I was in denial of what I wanted to do kasi may medyo pagkarebelde din ako dati, na 'Ayoko, ayoko maging kapareho niyo,' ganyan..."

As a child, Janine said she used to dislike the erratic nature of show business.

Still, love for the craft and the industry runs deep.

Janine's interest in acting was sparked during college.

But even if she grew up with actors, Janine had no idea what to expect on the set, and the network did not give her any special treatment. 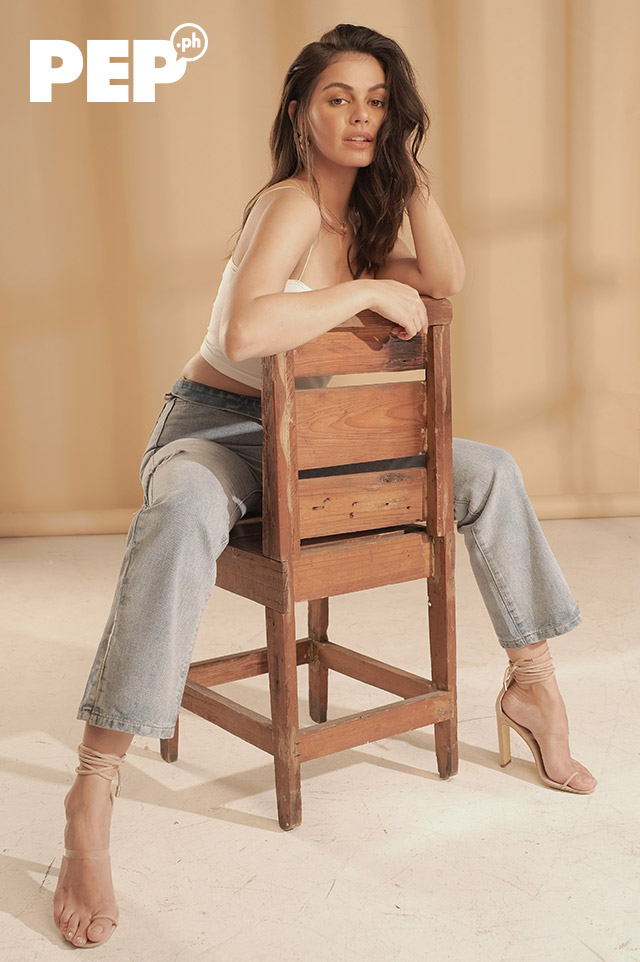 One time in 2013, when she failed to properly act out a role for a teleserye, she quickly learned that acting was no walk in the park.

"So, nung nag-artista ako, parang baptism of fire siya na, 'Oh my god! This isn't play time. It's work! You're getting paid to do this, to perform, to deliver.'

"'Tapos after nun, ang tagal kong hindi nabigyan ng teleserye, and then, I was like, 'Oh my god!'"

Janine was jobless for a year.

Around that time, the newcomer began to reconsider her career options.

"Nagka-second thoughts na ko, kasi I was really sad that I wasn't getting work.

"That was my original plan talaga when I was in school—to work for the foreign service or for an international company. 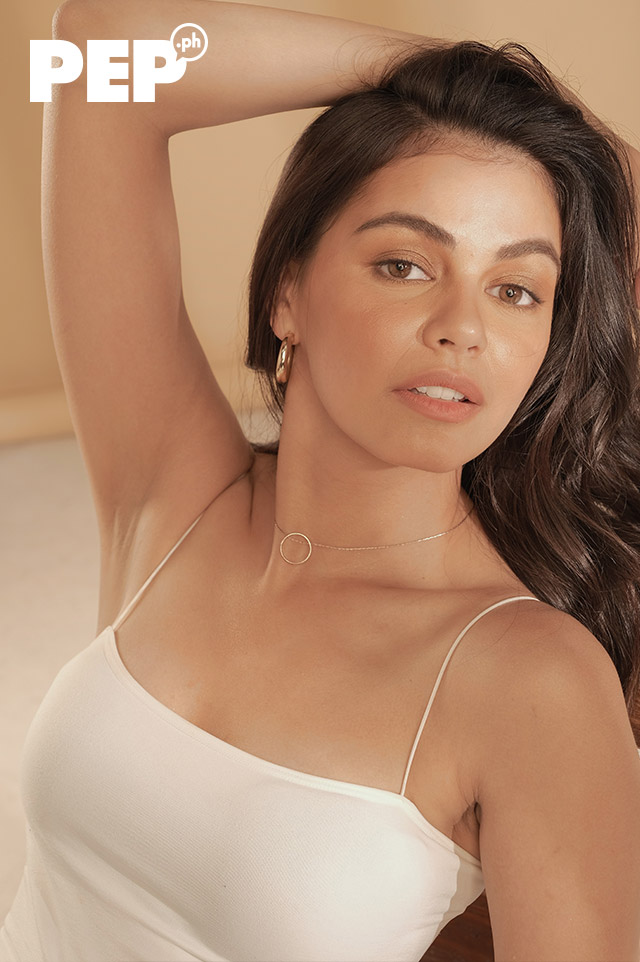 Then the remake of the '90s series Villa Quintana presented Janine with a chance to redeem herself.

She was offered the role of Lynette, the series' main female lead.

Elmo Magalona, then a Kapuso actor, was her co-lead.

"Villa Quintana was directed by Gina Alajar who, as we all know, is an award-winning actor herself.

"I really like working with all these people, being part of these stories, so dun ko talaga pinagtuunan ng oras na mag-workshop, pag-aralan yung mga role." 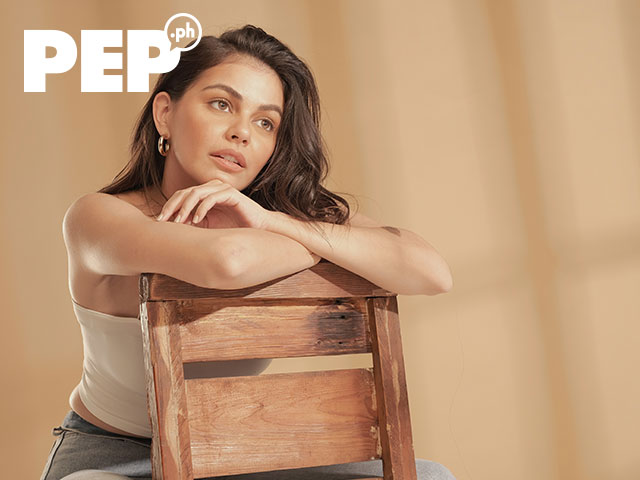 She became one of GMA-7's promising leading ladies, testing her star appeal with a major teleserye gig every year.

After Villa Quintana in 2014, Janine and Elmo reunited for the romantic-comedy series, More Than Words.

A year after, Janine landed her first solo lead series with Dangwa, which introduced viewers to her on-screen partnership with then-GMA-7 hunk Aljur Abrenica. 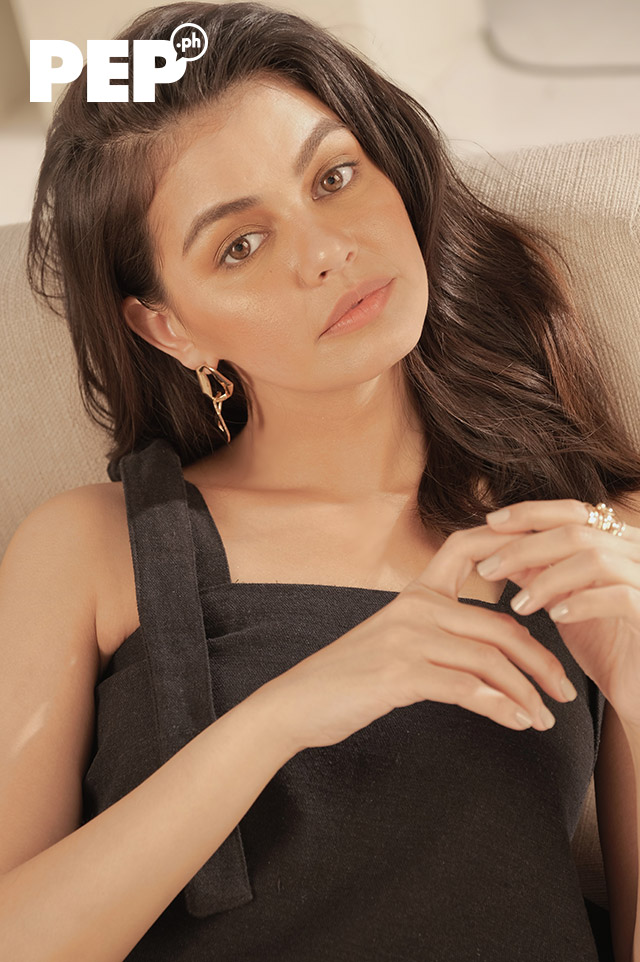 In 2016, Janine and Aljur starred in the romance series Once Again.

That same year, the actress guest-starred in the remake of Encantadia, where she portrayed Agua, the Kambal-Diwa of the Water Gem.

In 2017, her dramatic prowess was put to the test in the afternoon series Legally Blind, where Janine played a blind rape victim who continued to pursue a law degree.

The following year, Janine cut down on drama and went on a fantasy-adventure route with Sherlock Jr. and Victor Magtanggol.

For 2019, the actress is back as lead in Dragon Lady, a fantasy drama inspired by Filipino-Chinese culture.

As Janine proved herself a reliable network star, the local fashion scene offered more ideas for the young Kapuso beauty.

Through the lens of photographer BJ Pascual, it didn't take long for fashion magazines to dub Janine one of their newest darlings.

Her back-to-back collaborations with BJ propelled the young talent into the fashion big leagues. 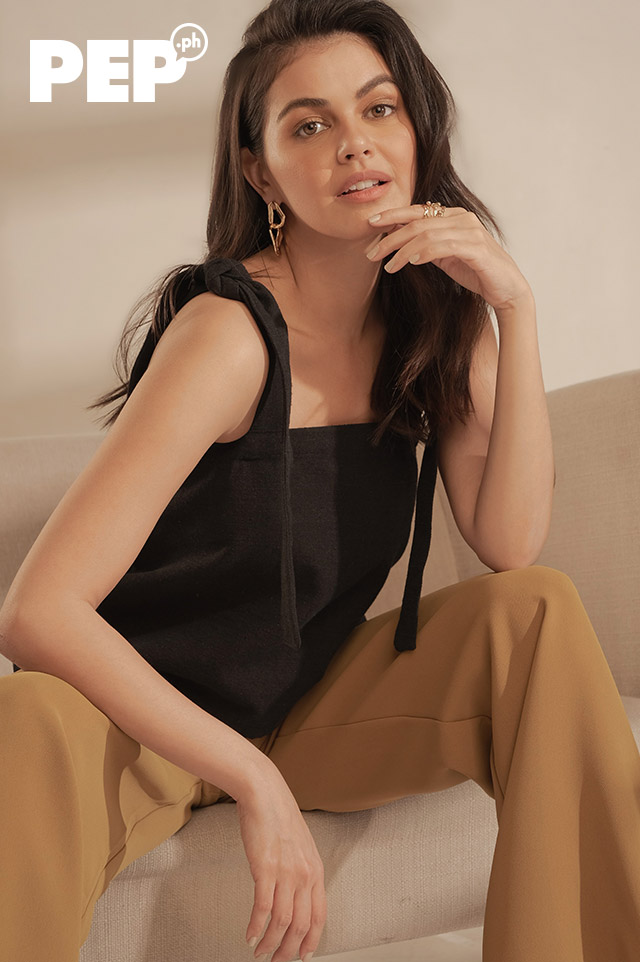 Foray into fashion was even more highlighted when Janine became a muse for designer Vania Romoff, placing her in the same league as ABS-CBN top star Anne Curtis.

In time, the GMA-7 actress became a real presence in fashion. So much so that Janine's current fashion influence began attracting international high-end brands such as Louis Vuitton, Tom Ford, Aerin, and La Mer.

Just this March 2019, she flew for the first time to London, United Kingdom, to attend a special event for deluxe fragrance brand, Jo Malone.

THE OTHER SIDE OF FAME

As Janine's star power shines brighter each year, the young Gutierrez has come to see the industry in a different light.

There was a point in her career when social media challenged Janine's tolerance of avid followers and their so-called "fan wars."

Social media—namely Facebook, Twitter, and Instagram—is the central platform that this generation of celebrities chooses to use in interacting with fans.

And if there's one thing the showbiz world has come to know about social media, it is that the place is a free-for-all for fans.

When the announcement was made that Janine would be Alden Richards's new leading lady for the 2018 action-fantasy series Victor Magtanggol, the actress was dragged into a Twitter war between fans of Alden and fans of his former love-team partner, Maine Mendoza. 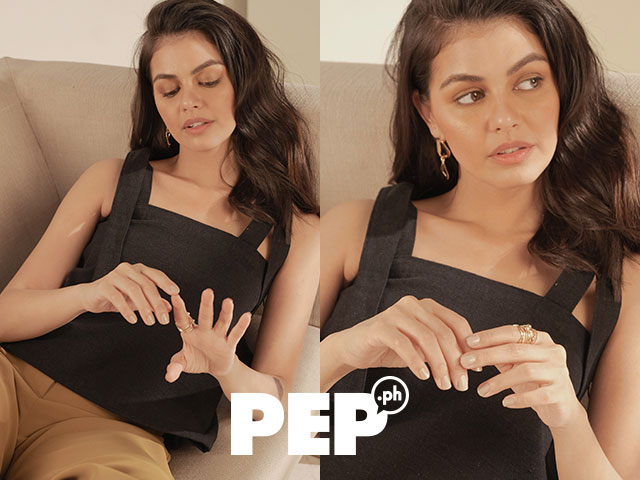 At the time, fans had yet to receive news about the true status of Alden and Maine's love team, AlDub.

The questions remained: Are Alden and Maine still a love team? Are they still going to work with each other?

In a way, the announcement that Janine would be Alden's new partner for his new series gave them an answer.

But, it wasn't the kind of answer they were hoping for.

Unfortunately, this placed Janine at the receiving end of the AlDub fans' anger about their love team's breakup.

"Masyadong maraming mean comments that I had to shut it off for a while," she said, briefly recalling that time.

It was her mom Lotlot, one of the best actresses working today, who put the fan disputes into perspective for her.

"Pero, it is still hurtful."

Another aspect of her career that Janine has come to feel is the pressure that comes from being a member of a star-studded celebrity family.

As the granddaughter of Christopher de Leon, Eddie Gutierrez, Pilita Corrales, and Nora Aunor, she is thrown a different set of expectations.

"But then, I realized after a while na, 'Oh my God! Sobrang nakaka-pressure pala!'

"Kasi, siyempre bilang dala ko yung pangalan nila, I also want to make them proud and, at least on some level, also have their success and yung pagmamahal ng mga tao sa kanila.

"So, it's a lot of pressure on myself.

"Hindi naman nanggagaling sa kanila yung pressure, pero parang nari-realize ko din, na sobrang... I had to admit also to myself na I had a privileged start in showbiz.

"So, hindi ko talagang puwedeng sayangin yun... You really have to make the most out of every opportunity given to you.

Janine is now eight years in the industry.

What changed for her?

"And now, looking back, actually I don't know why I didn't dream bigger...Eight years later, I'm still as hungry. If not, baka hungrier pa to do more work and to reach new levels. Sobrang dami kong gustong gawin." 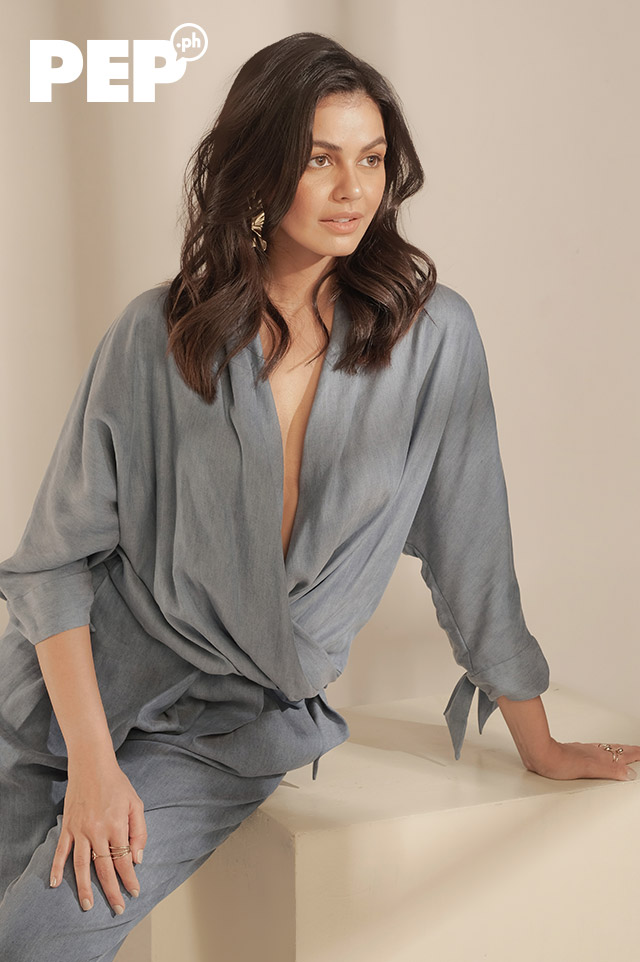 With her world much wider now than it was eight years ago, Janine dares to go international with her career this time around.

"Pangarap ko sana makapag-festival sa ibang bansa, to be able to attend the red carpet there.

"It's my dream to do a Netflix project with an international team.

"Nung bata kasi ako, hindi talaga ako nakakapag-travel, so I only was able to go out of the country when I was working na.

Musing on this milestone, Janine let out a little scream, perhaps out of fear and excitement for what lay ahead.

But with certainty in her voice, the actress says she will honor her wants and dreams more in the next chapter of her life.

"Yun yung theme niya for me. You really have to go for what you want."

And what does Janine want?

"I guess just allowing myself to be more free and to dream bigger. 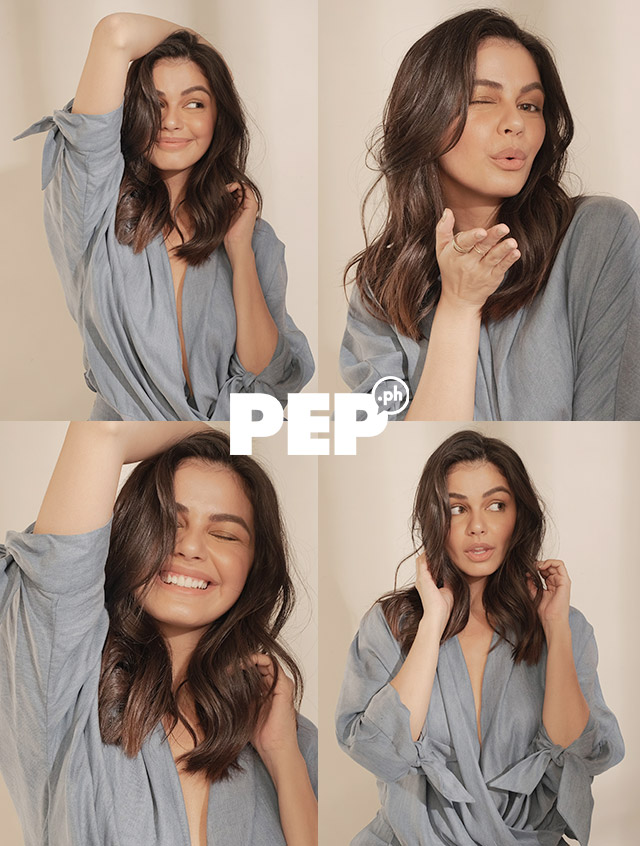