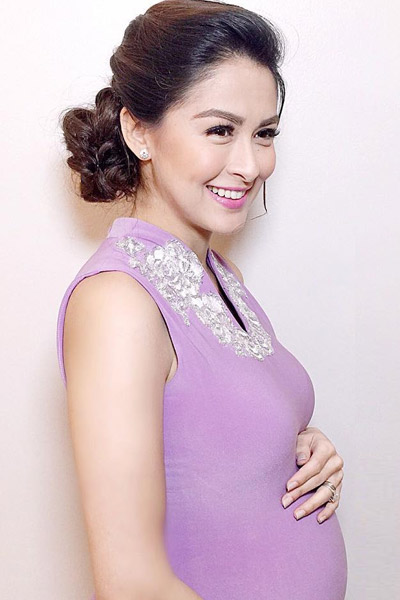 Marian Rivera is set to have her baby shower on September 26. Now 31 weeks pregnant, she is less than two months away from meeting her baby girl.

It looks like Christmas is going to be a grander celebration for some stars who will be delivering their bundle of joy before the advent season.

PEP.ph (Philippine Entertainment Portal) gives updates on the pregnancy of these #ExcitedMomsToBe.

Marian Rivera (31 weeks). One thing she has proven is that having a baby bump makes a woman feel her most beautiful.

The Kapuso Primetime Queen is set to have her baby shower on September 26. Will she be revealing the name of their baby then?

She is expected to give birth later in November, just in time before their wedding anniversary month.

Bianca Gonzalez-Intal (33 weeks). She celebrated her #DashingDivaBabyShower on September 20, with her closest friends. It was a simple and intimate pampering session at a spa.

The host is still regularly seen on PBB 737 and Cinema News, but she balances out her work schedule with pre-natal yoga, pilates, and plenty of bed rest.

Also expecting a girl early in November, she and hubby JC Intal have been building their nursery for Baby Lucia.

The husband left again today for lock in training out of town this whole week. ï¿½" But seeing his face light up every time with the little developments in fixing up our daughter's room, and getting to watch their games live over the weekend, makes missing him sulit. ðŸ’•

Empress’s “little angel,” her baby with non-showbiz boyfriend Vino Guingona, will be a November baby as well.

READ: Empress Schuck opens up about her pregnancy; reveal identity of father of her baby

Since then, Empress has become less visible on TV, shifting her focus on the next chapter of her life.

She has begun collecting mementos to document the first years of her angel.

Shamcey Supsup (21 weeks). The 2011 Miss Universe third runner-up beauty used to pray that she will have a baby before she turns 30.

She admitted to PEP that she is having a bit of difficulty with the pregnancy. Nonetheless, she is very excited.

Isabel Oli (nine weeks). She is the newest member of Team #ExcitedMomsToBe.

Her husband John Prats posted the exciting news on Instagram on Septemebr 15.

Her pregnancy, Isabel said, is an early birthday gift from God. She will be turning 33 on October 20.

Guess what are her food cravings? Arroz caldo and SkyFlakes!

MORE PREGGY MOMS. It is round two for these stars and the feeling is just as exciting as the first time.

Nikka Martinez-Garcia (5 months). It's another baby girl for her and husband Patrick Garcia.

Last May, in a press conference for Healing Hearts, the Kapuso actress revealed that she was two-months pregnant.

She will remain the only lady of the house as they are expecting another boy.

Judy Ann Santos-Agoncillo (25 weeks). Same as Angelika, Judy Ann and husband Ryan Agoncillo have been trying to have another baby.

On June 10, Ryan announced his wife’s pregnancy on Eat Bulaga!

READ: Judy Ann Santos: "I am on my tenth week of pregnancy."

Judy Ann is due this January.