The gowns he created for Catriona made their own mark for lending distinction to her winning carriage all throughout the Miss Universe competition last December in Bangkok, Thailand.

Mak studied Theater Design and Production Design and later in his career has imprinted his love for Philippine history in most of his designs—such as the "Sinag" gown and the "Mayon" gown that Catriona wore in her bid for beauty queen titles. 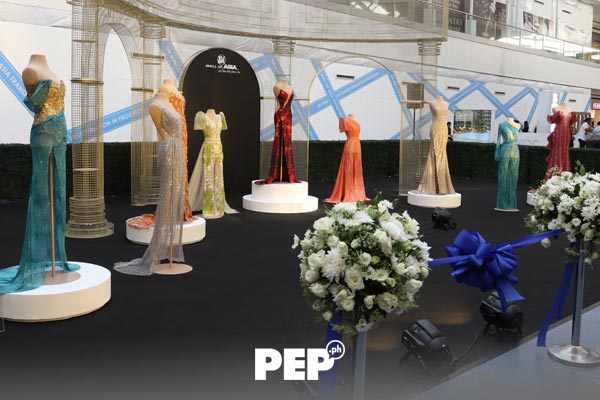 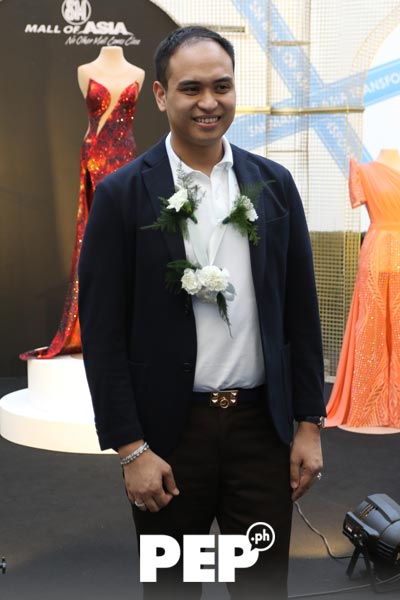 "It started during her Miss World journey," he said.

"Parang, Reynaldo Santos, her stylist during that time, during Miss World, they connected me to Catriona to support her for her Miss World journey."

Catriona wore the "Paru-Paro" gown at the Miss World after-party.

At the time, Mak had yet to consciously infuse Philippine culture into his work.

He simply followed Catriona's main requests for the gown to be in color red and off-shoulder. 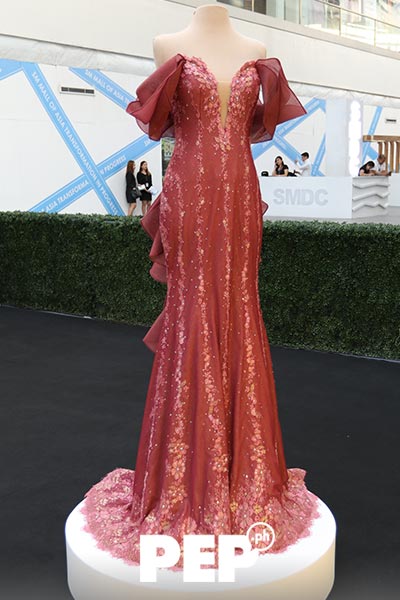 It took more than a year for Mak and Catriona to reunite.

"We never had a collaboration after nun. I also didn't see her sa modeling, I think she rested talaga," Mak said.

But when the new season of Binibining Pilipinas came around, Mak got a call from the future Miss Universe titleholder.

Mak revealed that the "Sinag" gown was Catriona's original concept.

He said, "During Binibining Pilipinas, she's very happy with the turn-out of the Sinag gown.

"Ano pa ipo-produce ko? Paano ko lalagpasan yun? How will I top that?

What exactly was a "Miss Universe caliber" gown?

"Usually kapag Miss World, for a gown, it should be sweet, queenly. Miss Universe should be sultry, sexy, very edgy. 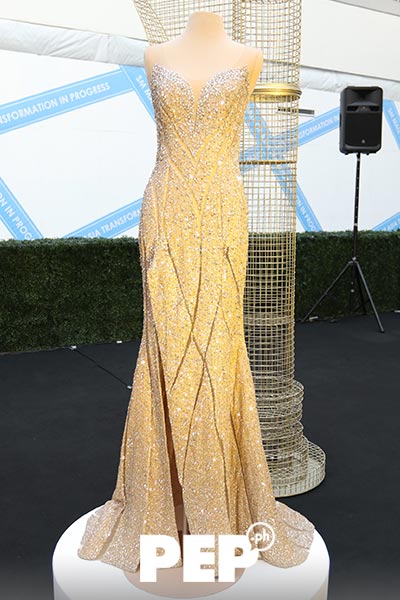 Before Catriona flew to Bangkok for the Miss Universe pageant, she also tapped Mak to design her gown for the ABS-CBN Ball.

Catriona wore "Bituin," which was an ode to the stars on the Philippine flag.

The Bicolana beauty was among the a standouts for that night. 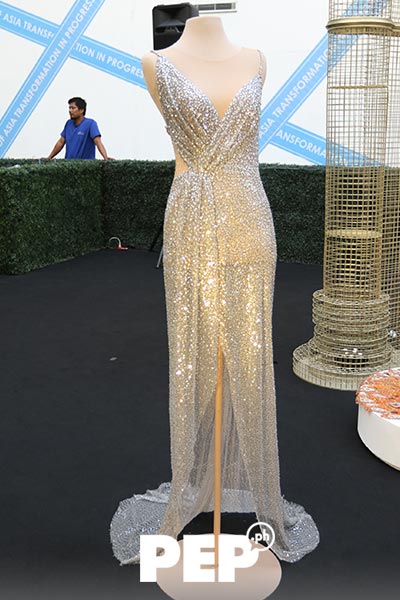 December 2018 was the turning point of Mak's career as Catriona officially began her journey to winning Miss Universe.

During the Miss Universe 2018 preliminaries on December 13, 2018, Catriona lit up the stage with her Ibong Adarna-inspired gown.

Mak saw Adarna a fitting symbol for Catriona's Miss Universe journey as the mythical bird is an emblem of "resilience, rising and rebirth."

This gown, along with the "Mayon," was one of the original concepts Mak had for the competition. 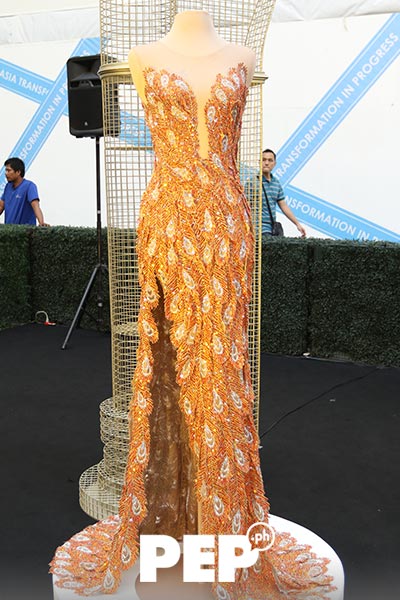 Mayon, Catriona gray's gown when she won the Miss Universe crown, can be considered as Mak's most memorable design to date.

For the grand coronation night, Catriona specifically wanted to wear red. That was the only request she gave.

The rest of the concept was up to Mak.

"She just requested for the red gown lang, so wala siyang binigay na Mayon story. The Mayon concept, it was all my idea"

He recalled, "Of course, the Mayon gown is very difficult to produce because it's very risky.

"I used digital print as a color guide, because no one used that.

"When you print on stage or even on an evening gown, it might look cheap because print is for ready-to-wear usually. Very risky.

"Since we have no other option for the Finals gown, just the Mayon gown, paano kung nag-fail yun?

"Also, for the sourcing of materials, it's very difficult because I used different shades of crystals.

"So, we cannot order ng isang bagsakan, baka ma-question yung sa amount or what. So, we did by batches muna.

"Also, the availability of the crystals hindi available agad, e. I had to wait pa for the time and all."

Looking back at his experience, did Mak ever think he would become a Miss Universe designer?

He said, "Hindi ko inisip. Never ko pinangarap na magiging popular in this field, in the pageant world. I just spoke to my clients before." 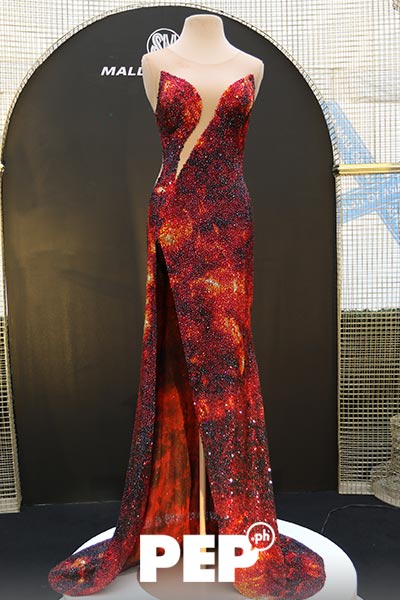 Post Miss Universe, Mak felt the pressure to keep on delivering the same level of quality in his work.

But Mak clearly thrives under pressure as he finished three modern takes on the traditional terno.

Catriona's first look during her week-long homecoming celebration was the "Corales," which was inspired by our coral reefs.

She wore this terno pant suit during the grand homecoming press conference. 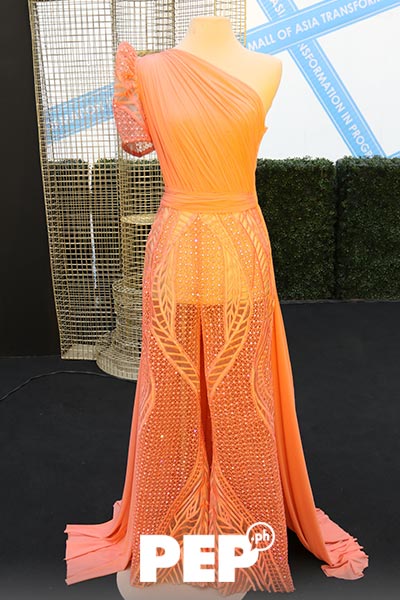 Mak specifically chose the sampaguita as his main inspiration because the name of the flower was derived from the words "sumpa kita." 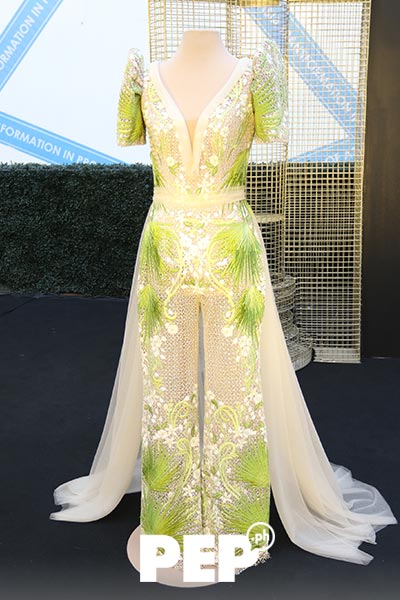 This design is a tribute to the seas of the Philippines. 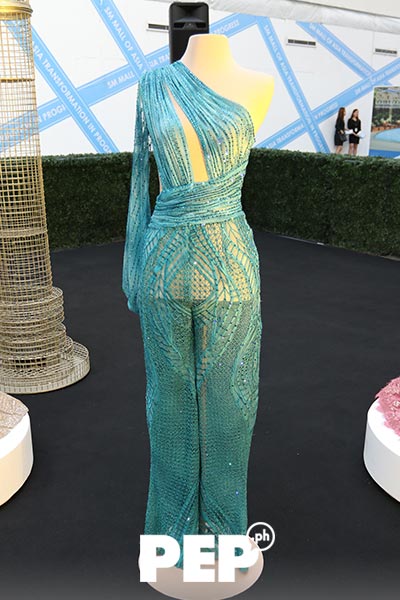 A few days after Catriona's Miss Universe coronation, it was revealed that there was one gown that she was unable to wear—the "Perla Oriente" or "Pearl of the Orient."

Mak wanted to execute this design because it was Catriona's original concept.

The fashion designer remaked, "Yung idea niya, it was a mash-up of two concepts.

"Originally, ito kasing Pearl of the Orient is originally red. So, that's also an option for the finals because ang gusto niya talaga suotin for the Finals is red lang.

"Ako na lang yung nag pangalan na, 'Okay, let's make it Pearl of the Orient since I will use blue na medyo pagka sea, and then its use of pearl.'

Catriona eventually got to don it during her homecoming concert on February 24, 2019. 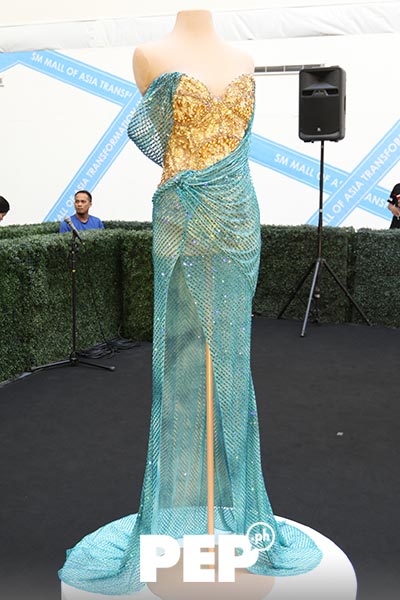 Mak revealed that he already presented his design for Catriona's final walk gown at the 2019 Binibining Pilipinas.

He said, "The concept was formulated during the homecoming nung ginagawa ko yung Sampaguita. Nabuo na. May story na. 'Ito, Cat, ito yung story.' And she loved it.

"And then from that color, I will relate this color sa mga puwedeng ipasok na Philippine ano. Dun kami nagsta-start."

As for her Miss Universe final walk, the occasion was still too far ahead for Mak to worry about.

But Mak already felt the pressure to deliver.

Mak's grand wish is to design a national costume.

He said, "Someday, I want to do a national costume for the Philippine representative, because ang course ko sa college is Theater Design, Production Design. I do costumes.

"I'm into costume-making talaga and also into Philippine history, so I'll be very privileged if, someday I will do a national costume for the Philippine representative.

"It's one of my dreams kahit na naka-produce na ako na nag-viral na finals evening gown, I still want to do a national costume. Someday, maybe."