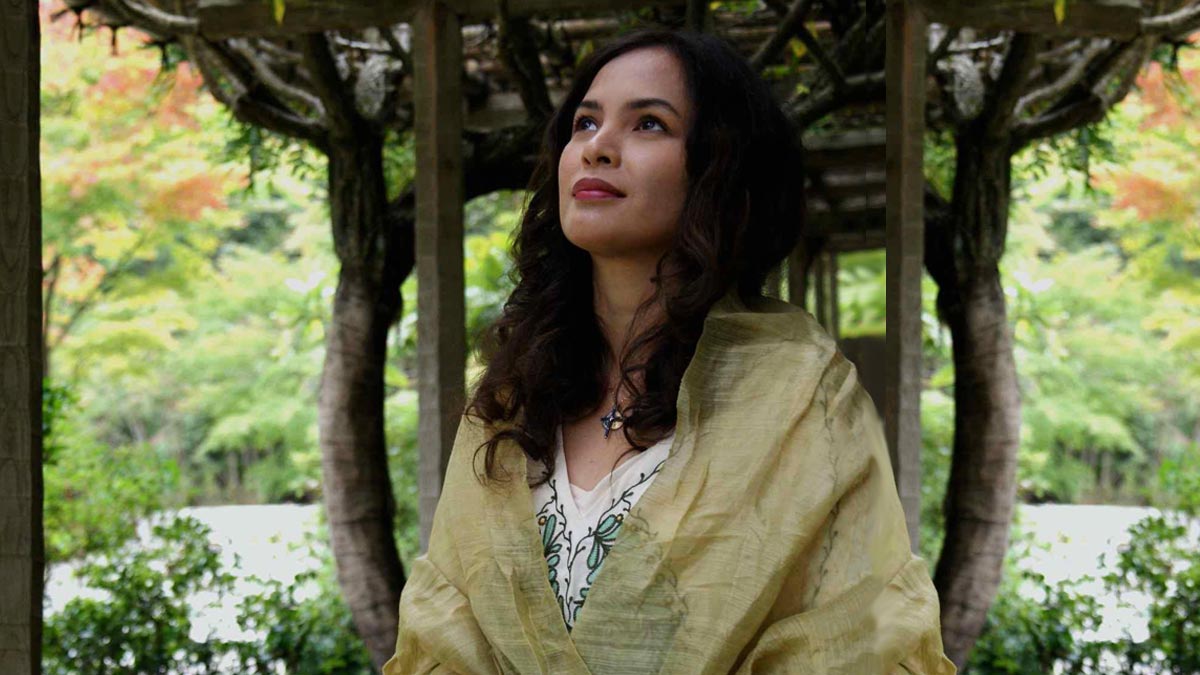 As mentioned on a viral Facebook post dated March 29, the former actress-environmentalist now goes by the name "Sister Lourdes."

Chin-Chin was consecrated at the Carmelite Convent.

The daughter of botanist Dr. Hermes Gutierrez and former Franciscan nun-turned-painter Cecilia Arnaldo, Chin-Chin said she has always felt the call to serve the Lord throughout her life.

She recounted in a video interview Portraits in Faith on YouTube that the first major sign came to her when her philosophy professor in college challenged her notion about the existence of God.

She said, "Believe it or not, it actually touched a core in my being. The fact that we could question the existence of God in a very Catholic school.

"Maybe nobody noticed it, but I approached my professor and asked, 'I know this is for the grade, but is anyone going to take care of my soul while I'm at it?'

"'While my mind is trying to convince myself and to find proof that God does not exist, does not God hear me? And is anyone going to be responsible for my soul?'

"And he smiled and he said, 'Continue, continue. You're entering something very interesting and beautiful, so pursue that even as you try to make the grade.'

"For some reason, I understood what he meant and that was the, I think, the awakening of consciousness for me. The quest has begun...

"There's more beyond that we can all comprehend and what we are conditoned to believe is probably a beginning, but truth is the journey that He wants us to all take.

"Just like a father to a child, to his daughter, He would love that His daughter knows Him personally. And truly, just not know about Him, about His works... so I said, 'Yes, I will take that journey.

"'I will not turn my back on anything. I will just expand myself and let You form and mold me.'"

This interview was uploaded in September 2013.

Chin-Chin was mostly known for her kontrabida roles in teleseryes.

One of her more famous roles was as Corazon Roxas vda. de Berenguer in Maging Sino Ka Man, the John Lloyd Cruz-Bea Alonzo hit series that ran from 2006 to 2008.

Her version of Maria Clara in the '90s television adaptation of Jose Rizal's novel, Noli Me Tangere, was also memorable.

The former actress believed that this particular role marked a significant part in her journey.

She explained in the Portraits in Faith interview, "It was not an accident that I played the part of Maria Clara and was accepted in that television series...

"Noli Me Tangere for me was sort of, like, a scientific and anthropological and spiritual study of our society in those days, in the late 1800s.

"And as a doctor, it's no wonder he diagnosed our society to have cancer. This is the cancer of our society today. How are we going to be tomorrow?

"And that was more than a hundred years ago, when people didn't really have access to education or to the existence of consciousness.

"But we had our native intelligence that was always there. The soul that knew.

"And I think Jose Rizal had perceived that soul, that Filipino soul that was untouchable. And it was his expression to tell others that we have a soul.

"A soul that will refresh us, sustain us..."

She initially studied Communication Arts to pursue a career as an investigative journalist, but her path seemed to be steering her towards showbiz.

And around the time she was doing Noli Me Tangere, Chin-Chin was "confronted with a question."

Somehow, this question tied back to what her philosophy professor told her.

"I guess I'm trying to investigate the human conditions...

"If God is leading me to this 'business' or this industry, let it be a way for me to find Him because showbiz was really not the safest path to take.

"By grace, I knew that, but I didn't know what showbiz was all about.

"The culture of materialism and masks and illusions was surrounding us, but I feel if the artist knows its soul, then we can still use the medium and preserve that integrity in any project.

"I found ways, and the Lord had shown me ways... For some reason, I was guided by the right people, the right circumstances to make the right decisions."

During her active years in showbiz, Chin-Chin used the spotlight to bring attention to her advocacy for environmental sustainability.

For her, taking care of the environment meant preserving the sacredness of life.

She related in the same 2013 interview, "It's not just about survival. I realized in the last 15 years, environmental issues and movement is not just about our human rights to live and sustainability.

"Not just people, but every being that has life is part of our scaredness.

"We destory our sacredness when we destroy any part of nature...

"Right now, I'm just looking at all the thousand of species in the rainforest, we can't continue fighting each other. We have to start looking ourselves as a community.

"Like the thousand species in the rainforest, we realize that survival and love should be a communal affair...

"We have to take very, very crucial steps in how we address healing our land and our relationships, I believe.

"Because the Earth can live for another 1.5 billion years. But with global warming, climate change, can we as a human being survive as a species on Earth?

Year 2006 was a major turning point in Chin-Chin's journey.

She recounted, "I like what my father said, 'There is love and there is proof of love.'

"It's not that random that, when we are prompted in our souls to or called for a certain part of the journey. There are parts of the journey and then there's the whole journey itself.

"Somehow, God wishes us to know Him. I don't think He wants to remain a mystery for us.

"Let's say Christ Himself would call God Abba, Father. There are so many clues already about this relationship, and religion, traditions are ways, all paths to our common union.

"My mother would always say, 'Whatever you become, Chin, whatever you chose, remember we have one purpose in life.

"'And that is to remember our way back to God.'"

In December of that year, Chin-Chin and her mother faced a "crucial" moment in their lives.

Her mother was hospitalized and at a critical state.

Chin-Chin continued, "We were in and out of the ICU, the ER. She was really collapsing. Her body was in a collapse.

"If it was not her kidneys, it was her heart. If it was not the blood pressure, it was waters spilling out of her cells..."

She recounted one fateful exchange with the Lord in between those moments.

"At one moment, we really have to embrace that solitude and that silence and that reckoning with our divine origins.

"Where we come from, where we're going? That's our birth right to ask.

"And if there's a mission, I said, then so be it... let my words be the first movement of my acceptance, total acceptance, and total offering.

"Then a fast thought came, 'What if there are obstacles?'

"Then take away everything that is not necessary."

A FIRE, REAL AND THE SPIRITUAL

After that key prayer to the Lord, Chin-Chin was given an answer in the form of a near tragedy—a house fire.

Chin-Chin's Quezon City home was completely burned to the ground on December 20, 2006.

"I woke three o'clock in the morning. I was woken up," the former actress narrated.

"It was a very quiet fire. Not even the neighbors—nobody knew.

"I jumped over the banister because at that time, the fire, tons of fires. It was like, the floor to the ceiling.

"It was mesmerizing. You get paralysed to a certain extent. And I could almost hear the fire saying, 'We are here. We have arrived. But not for you, so get out as fast as you can.'

"I just found my body was just following and I was hardly awake, but I knew what to do.

"I was looking at the fire, I landed on the floor downstairs. Crushed my heel, compacted my spine. I was able to move by grace again. We carried my mom out to the garden.

"In minutes, the whole house was devoured by the fire. It was contained because it was built with stone."

Chin-Chin got second to third degree burns from the fire, but she didn't feel any pain.

In fact, she felt that her "spirit was prepared for this."

While the nurses attended to her in the emergency room, she said a quiet prayer, "Heavenly Father, what do I do? What do I have to do?

"And then a voice came back and said, 'What do you have to do?'

"'I have the Miraculous Medal still strong on my...' 'So, bear witness.' Watch, pray, and bear witness. Okay.

"And then there was a nurse who was patting my shin to comfort me, and that's when I started to realize where I was. It's like my spirit went back into... emotions were alive again.

"And then I said, 'Who are you? You are comforting me so well.' I was already teary-eyed at that time. I said, 'It's more painful what you're doing to me than the pain I'm feeling in my hands, in my burns.'

"In my mind, his compassion was more painful. 'What is your name?' And he said, 'No, I'm just a nurse. It does not matter. You'll be alright.'

Chin-Chin smiled to herself at the memory of it and recalled connecting the message in her head, "Okay, watch, pray, bear witness in the spirit. Live in the spirit.

"Who's going to be responsible for my soul? Okay, the spirit—God.

Chin-Chin faced the tragedy of losing her mother three weeks after the fire, but as she described it to PEP.ph (Philippine Entertainment Portal) back in January 2007, it was a "peaceful send-off."

Life continued for the former actress after both events.

And with renewed sense of purpose, Chin-Chin recalled asking herself and the Lord three questions: "What do I put to a close? What do I continue? And what do I begin?"

Whatever the answers would be, she reminded herself to accept it openly.

Speaking in Portraits in Faith, Chin-Chin related it to the shoreline.

She said, "The shoreline is so beautiful. Jesus always walks along the shoreline. It doesn't cut. It goes up, and then it recedes.

"If your life has to recede, accept the pace. The beauty of that receding.

"And then even when it has to rise, accept to face that.

"You have to face new shores, you have to leap into the new life.

"And what do you continue? You don't cut communion with people, with life, where you are...

"Those resonances of beauty and love and communion. It's all here with us...