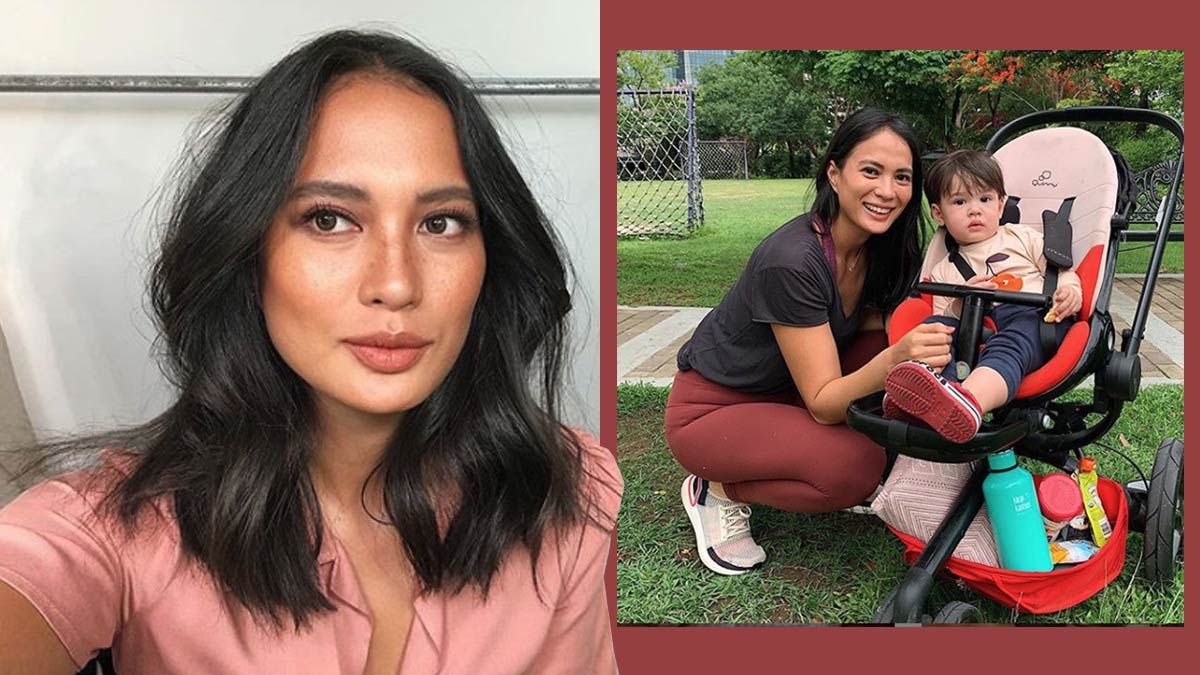 Isabelle Daza puts a limit to posting photos and videos of son Balthazar on social media.
PHOTO/S: @isabelledaza on Instagram

The celebrity mom has learned from a psychologist that "oversharing" about a child's life online can lead to self-esteem issues in the future.

She said during a parenting forum in May, "I talked to a psychologist about this, and I asked him, 'How much is oversharing?' What are the dangers of social media exposing your child too much to social media? How does it happen ba?"

The daughter of 1969 Miss Universe Gloria Diaz gave an example.

She continued, "…In summary, he says, when you say, post an experience you and your child have... let's say, I take Balthazar.

"He hits somebody, right, and I post that video of him. And then his classmates see him and says, 'Hey, look, you're so naughty. You hit someone. I saw your photo.'

"The psychologist explained that the child, he loses his own self-identity, so he starts to have self-doubt.

"And from that classmate, from that interaction, he says, 'Is that who I am?'

Isabelle said the video could only have been ten seconds of his day, but it "will make an impact on who he is."

She continued, "The psychologist was saying that when mothers overshare what their children are doing, they don't realize the effects now.

"But later on, it will happen and that, for me, was an enlightening moment."

Since then, she has started putting a limitation to Baltie's social-media exposure.

"I wanna post every minute that I find my son is cute, annoying, or whatever.

"And I just restrain because, again, he says, your child will lose his sense of self-identity."

ISABELLE DAZA DOES NOT WANT SON TO FEEL PRESSURED

She said in a previous interview that motherhood has taught her to be more mindful about the effects of social media on a child's psyche.

Isabelle related, "I see that a lot of children now are growing unhappy and not understanding how to cope with this type of pressure.

"I mean, I can talk for hours about this topic, but, basically, social media can lead to mental health issues, you know?

"I'm not villainizing it because I think it has a lot of benefits, but, sometimes, when it takes over your life, you come out not knowing why you're feeling this emptiness and unhappiness."

As the daughter of of a former beauty queen, Isabelle knows the reality of being tagged celebrity kid.

Public attention, for one, is something she can't fully control for herself.

But in the case of her son Balthazar, she has been keeping a tight watch. "When people say, 'Oh, he's so guwapo,' I'm like, 'You don't have to tell him that.'

"That's not the only thing he is. He's a good listener also. He loves to kick balls and things like that.

"Sometimes we're so fixated on the external appearance kasi, and, at his age now, I already try to mind what I say.

"I try not to compare him to his cousins, my friend's kids, and I try to just appreciate him for his own uniqueness."

Isabelle wants her son to grow up in an environment where he is comfortable with the person he is.

"I'm really trying to think of a way on how we can shift the thought and kind of bring back the conversation to joy, especially with my son.

"I don't want him to feel pressured to grow up to be anyone else but himself, so something super simple.

"I tell him is 'You're enough. You don't have to be anyone else. You can rest in my love, you don’t have to earn it.' That's what I tell him every day...

Isabelle herself has become wary of how much social media has played a significant part in her life.

In March, the ABS-CBN talent called herself out on Instagram after realizing the great amount of time she spent using her phone in a day.

"I didn't realize how much I'm on my phone," Isabelle told PEP.ph (Philippine Entertainment Portal) after the parenting forum.

"When I checked my screen time, I said, 'My gosh. Six hours and 57 minutes.' Basically buong araw."

An Instagram video that Isabelle posted was meant to be a personal reminder to put down her phone.

The message resonated with her followers and it went viral.

She commented, "Wanting to constantly post your child, it happens, e. Siyempre you're proud.

"But that's all your child sees. It's constantly your phone. It really shapes who they become.

"And I was very shocked na ang daming tumanggap nun in a positive way."

The 31-year-old star is social-media savvy, and has put out a number of compelling posts—some of which tackled parenting.

In July 2018, the same month she showed Baltie's face to her social media followers for the first time, Isabelle Daza delievered a moving speech about the popular platforms' ill effects on mental health.

Here's the full transcript of her video:

"It was a common denominator amongst all of them, being ashamed, and I don't know what it was about me that they felt the need to share, to open up, and I kept thinking, 'Why are you ashamed if you need help?' We look at, let’s say, cancer and we think there are charity events for cancer. People talk about it and there are communities behind this. It's an amazing support system, but why is it that when it comes to mental illness, depression, no one wants to talk about it.

"I was asking my husband, I said, 'I don’t know why me. Why do people keep telling me? Am I supposed to do something about it? Why are they telling me their story?’ And Adrien, my husband, said, 'You don't know why they're telling you? Because you asked them how they are and they share and you listen to them.' And I didn’t know what that meant, listening to them, because, for me, I just was me making kwento. Then it got me thinking and I messaged my friend, one of the organizers here, ‘You know, we have to do something about mental health,’ and it just went from there.

"I guess I'm here today because I was so afraid to talk because I didn’t go through it—I wasn’t diagnosed with clinical depression—but I felt like I don’t need to have gone through it to be sensitive to it. I want to remove the stigma that mental illness, anxiety, depression, is something we need to be ashamed of. I want to be a voice of my generation and to be heard that this is an epidemic. More people are affected by mental illness and depression than cancer and heart disease, [more] than you can ever imagine, and yet nobody really talks about it. It’s amongst us but God forbid anybody finds out that we’re not living this perfect life.

"I guess I'm here today because I’m a social media influencer. Recently, I went to this concert of Jessie J and she sang this song. She sang a line and said, 'It's okay not to be okay,' and that really broke me because I felt like I wasn’t alone and not being alone is so important when you’re going through this. You're so pressured to keep up this facade of living a perfect life, of being on social media, knowing the latest trends, having the best outfits—showing everyone that you're okay when you’re not. When you go home and you’re so 'uncontented' with what you have even though you have an amazing life because social media does that. It generates this jealousy and it generates this 'I'm not good enough,' 'I'm not as pretty,' 'I'm not as thin,' 'I'm not traveling as much' anxiety.

"With me, I felt like, 'I need to be relevant,' 'I need to be talked about,' 'I need to post something today otherwise people will forget me and I won't have a career.' It's just this anxiety that traps you and if I didn’t have my amazing friends, my family, and my support system to tell me that, 'You're gonna get through this,' I don't know where I would be. That’s why I wanted to be here today and I wanted to support this cause because I feel like we have to start somewhere. We have to talk about it. Mental illness and depression are amongst us. In my group of friends and family alone, every single person I've talked to about this talk today said, 'I wanna be there,' I wanna support you.’

"I'm not gonna say that it’s the most awful thing on earth because social media has helped us with a lot. But what I want to say is that this is just a fraction of our reality. I can't imagine being a teenage girl growing up in this generation, looking up at influencers and bloggers and wanting that life and then going home and feeling like, 'I don’t have it.' Maybe this can lead to mental illness and depression and anxiety.

"I just wanna leave with that message—just talk about it. Just ask one person, make that connection, and say, ‘How are you today? How are you feeling?? How's your relationship?' Let's remove that stigma that this is something to be ashamed of because it's not. This is something that needs to be talked about and people need to be heard. Maybe we can save a life."