by Emmy Burce
5 days ago 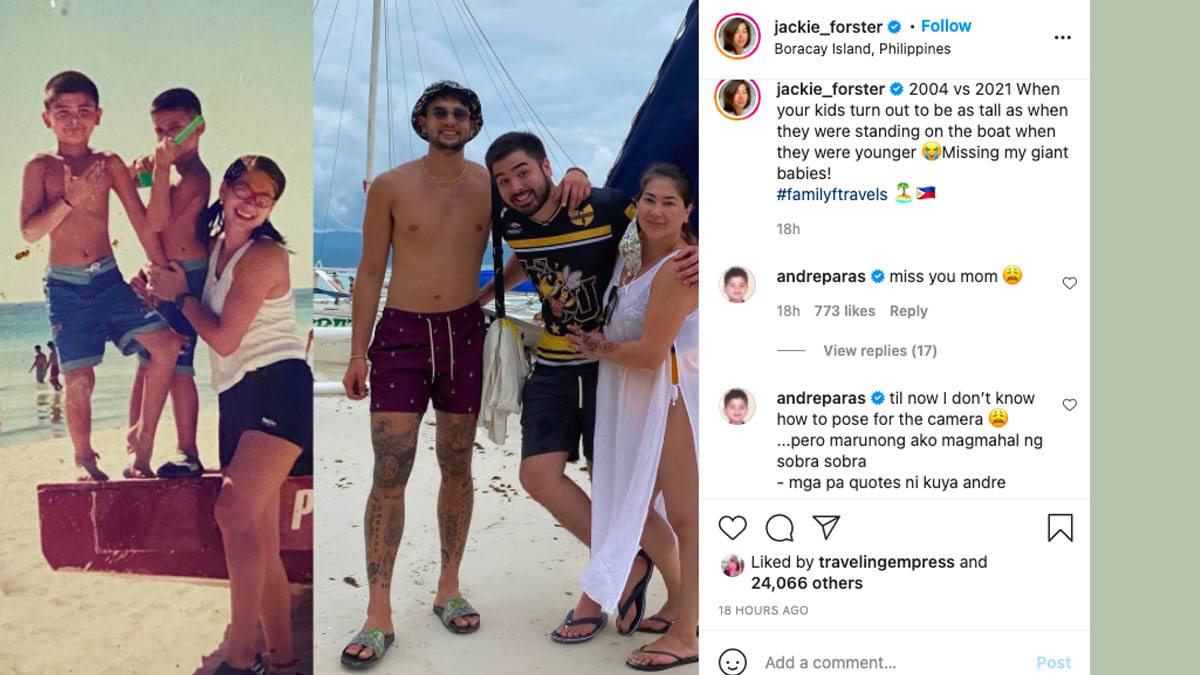 Just before leaving for Singapore, Jackie Forster and her sons Andre (2nd from R) and Kobe Paras (3rd from R) had the chance to recreate a photo which was taken in Boracay in 2004.
PHOTO/S: @jackie_forster on Instagram

Andre Paras has been commenting on the Instagram posts of his mom Jackie Forster, and the fans are happy.

His comments are usually short, but they tell so much about his being a sweet son and a protective brother.

Jackie's latest post recreated a photo that was taken in Boracay in 2004.

Andre was around eight years old then, while his brother and Jackie's second son Kobe was six years old.

The mom of five wrote, "2004 vs 2021 When your kids turn out to be as tall as when they were standing on the boat when they were younger. Missing my giant babies!
#familyftravels "

His other comment, which alluded to his zero love life, similarly attracted 774 likes.

In another post, Jackie teased her eldest for being "single."

Published as is, she wrote in the caption, "ung complete package ka Sana pero choice mo maging single...@andreparas and his life of #weightsBeforeDates. Mama loooves you sooo much! baby #1"

But most of the time, either he is just warding off the future suitors of his 10-year-old sister Caleigh Simone... 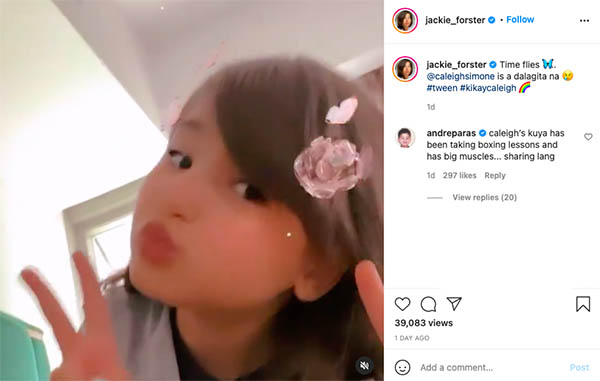 ...or he is dropping on his mom's feed a dose of his goofy sense of humor, which usually highlights his good looks.

Currently based in Singapore, Jackie couldn't help but be sentimental in some of her posts.

In the family's groufie before Jackie and kids—Jared, Caleigh Simone, and Yohan—left the country, Andre wrote, "damn, even if the photos are one year apart you can really see how Cute André has gotten."

Then he put out another comment, "but seriously, I’ll miss you guys. Kuya will just be here. Even if you get older I’ll still be the same old manchild. I love you all."

By the way, Andre also appreciates his mom's posts about his projects.

Jackie, Andre, and Kobe's story has been followed by many fans.

After being separated for 12 years, they reunited in 2018.

Kobe's phone call to his mom in January 2018 paved the way for reconcilation.

Andre and Kobe are Jackie's sons with cage-comedian Benjie Paras.