Krista Miller wants to move on from controversy with Cesar Montano; admits falling for Kiko Matos 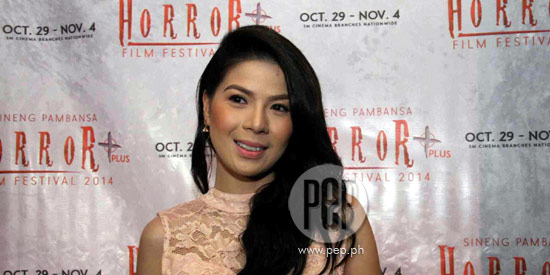 When Krista Miller was asked about Cesar Montano, she pleaded, "Puwede move on na tayo?" She said she did not communicate with Cesar after working with him on the 2013 film Alfredo Lim: The Untold Story.

During an interview in April 2013, Krista said that she was in a relationship with someone.

However in an interview held yesterday, October 15, at Annabel's Tomas Morato, she revealed that she is now single.

Krista is the lead star of the film Hukluban, which is part of the Sineng Pambansa Horror plus Film Festival.

Presented by the Film Development Council of the Philippines, this filmfest will run from October 29 until November 4 in all SM Cinema branches nationwide.

Krista is being linked to Kiko Matos, her leading man in this horror film directed by Gil Portes.

Is Kiko single now or is he in a relationship?

"Single pa," he said with a smile.

She was referring to the fact that her character in the film is a beautiful woman but transforms into a hukluban, an aging old woman. The immortal woman lives through six generations trying to find true love to break the curse.

"Bata pa, o," pointing to Kiko who was standing right next to her.

In 2013, Krista was tagged as the third party in the marriage of celebrity couple Cesar Montano and Sunshine Cruz. The couple separated after 13 years of marriage.

Krista denied having an affair with Cesar.

Krista said that she and Cesar no longer communicated with each other after working on the movie Alfredo Lim: The Untold Story.

In the past, Krista said that she wanted to talk to Sunshine Cruz to settle things between them.

Did she ever talk to Sunshine regarding the allegations?

Did they get carried away while shooting their love scene?

He says they did not undergo a sensuality workshop to prepare for their scenes.

At this point, Kiko looked at Krista as he said, "I've had girlfriends in the past and I hope I have a new one."

He also reveals that they were surprised to learn that they would shoot their love scene during their first shooting day.

They said they did remove their clothes and they were simply covered by a towel.

Krista motioned that she tried to push Kiko away as she said, "Wait lang, dumidikit yung ano mo!

ON BEING LINKED TO KIKO. Is there a possibility of her falling for her leading man Kiko?

She said she is entertained by Kiko's pick-up lines that he often gives her while they were shooting.

At the beginning, Krista felt that she would not become close to her leading man.

She said she now makes time for Kiko's visits.