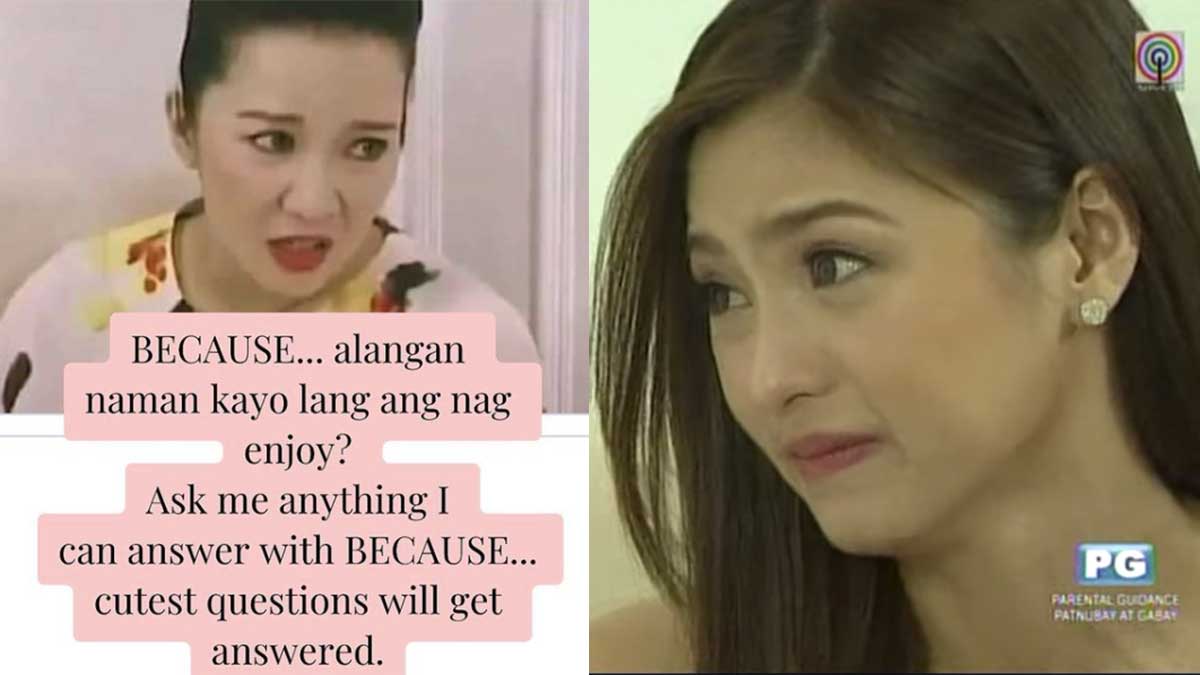 Kris Aquino uses a 2020 meme of her interview with Kim Chiu in 2014 to interact with her Instagram fans because...? Because, maybe, why not?
PHOTO/S: Kris TV (ABS-CBN)

The now-defunct ABS-CBN talk show showed Kris repeatedly asking “Because?” after Kim’s every answer, which she couldn't finish because she was crying so hard.

In May 2020, the clip was reposted at the height of Kim’s controversial classroom quote “Bawal Lumabas.”

The 30-year-old actress was one of the celebrities who participated in the Facebook Live video of Kapamilya stars protesting the shutdown of the network.

This February 2021, netizens turned Kris' "because" expression into a meme using different situations.

Check out the tweets on social media:

On February 7, 2021, Kim reposted the meme on Twitter with the caption, “dyosko kayo talaga! Nahanap nyo to because???”

Kris, for her part, used the meme to have a Q&A with her Instagram fans: "BECAUSE... alangan naman kayo lang ang nag enjoy? Ask me anything I can answer with BECAUSE... cutest questions will get answered."

Kim paused then wiped her tears.

Kris then asked her to continue, "Kasi?"

Kim tried to regain her composure so she could complete her answer, but she kept pausing to wipe her tears that seemed to flow uncontrollably.

The viral interview was aired in January 2014, when Kim was promoting Bride for Rent, her movie with Xian Lim.

Kim was very emotional because it was the culmination of a horrible week for her.

A week before the Kris TV interview was the movie's press conference, where her answer to the question about the real score between her and Xian was criticized by netizens.

What she said then was, "We don't owe you any of our personal lives."