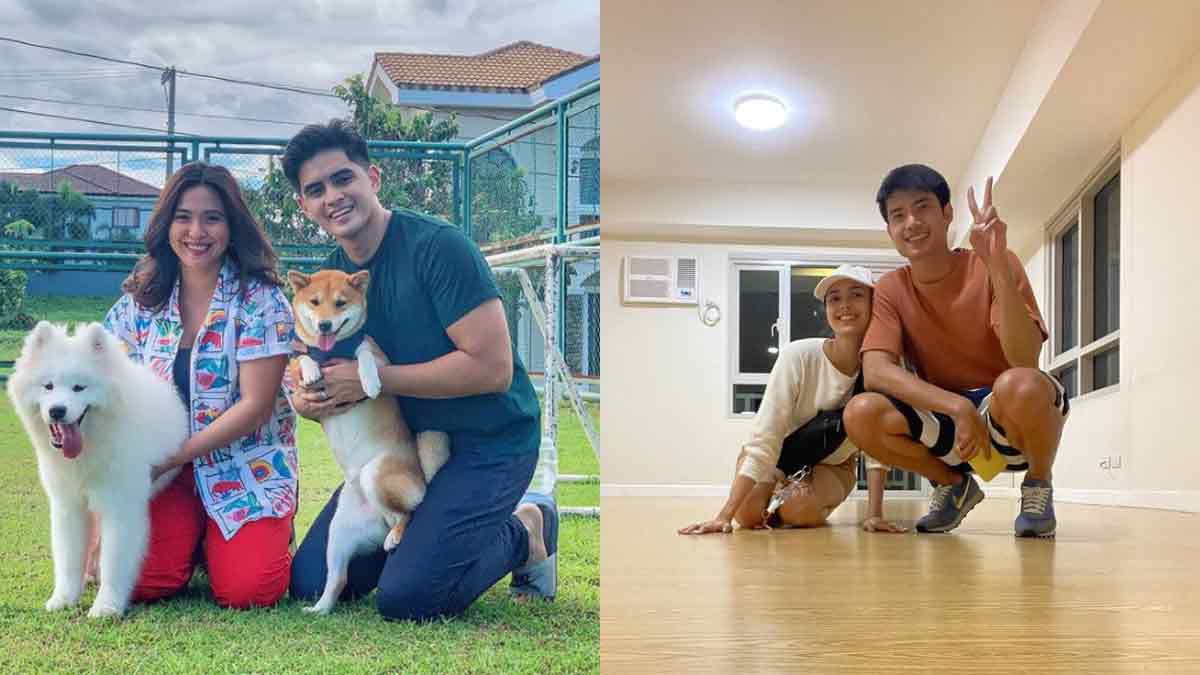 These celebrity couples are among the stars who chose to move out of Metro Manila. Joyce Pring and Juancho Trivano begin life anew in the south, while Megan Young and Mikael Daez get ready to do the same in the north.
PHOTO/S: @joycepring / @mikaeldaez on Instagram

Probinsya life is the newest trend among today's celebrities.

Many celebrities have lived in the city for most of their lives, preferring to live in the heart of the metro to make it easier to travel from one engagement to another.

But with the ongoing COVID-19 pandemic, these couples have decided to try living a new life away from the metro.

Joyce and Juancho settled in their new home in Laguna in November 2020.

The move was a major change for Joyce, who had considered herself a city girl all her life.

The celebrity mom-to-be told PEP.ph (Philippine Entertainment Portal) in a virtual interview on January 21, 2021: "Transition has been crazy, but fun. I actually am super surprised kasi I have never lived outside of Metro Manila. Talagang Manila girl ako ever since.

In the beginning, Joyce admitted she felt "super anxious" because the move might be too big of a change for her.

But when they settled in their new home, the podcaster-host saw a massive improvement in her quality of life.

"It was smaller space lang. We had dogs, so parang medyo nahirapan kami how to walk them all the time. There were times na during the lockdown, bawal ilakad iyong aso o bawal even lumabas sa unit, so it was really difficult."

Now that Joyce and Juancho live in a house that gives them more space to breathe, she is beginning to "enjoy the little things" that only the province can provide.

"Seeing trees, listening to birds in the morning kapag nagigising ka, and meron kang kuliglig na maririnig kapag matutulog ka sa gabi. That kind of silence from the constantly changing environment of working in the media has been peaceful and life-changing.

"Ten out of ten recommend it, guys! If you're thinking about moving outside of Manila, mabilis ang internet dito! 100mpbs pa rin!"

Megan Young and Mikael Daez GET READY TO move to Subic

Megan and Mikael had been considering to move out of Metro Manila for a while now, and they finally decided to give it a shot this year.

In the same virtual interview on January 21, Mikael revealed that they're already in the process of moving to Subic, Megan's hometown.

He said, "We've already done the initially steps of that. We already know where in Subic we're going to move into, but we haven't moved there yet.

"So right now, I think we're going to try and set up that area as best as we can, so when we move in, it's convenient na."

Just like Joyce, Megan and Mikael also have their own podcast. They are currently considering how their big move to the province may affect the production of their podcast.

"If we're going to move in na, we're going to have a hard time producing all the shows. The podcast, the vlog, the back and forth and the logistics of all the work that we have to do. So we picked a place and, so far, that's what we have."

Mikael added that "the next two or three months is going to be dedicated to being able to set that place up, set the logistics up para paglipat namin diyan super linis na siya."

Luigi Muhlach and his family move to Tagaytay

Luigi Muhlach, his wife Patty, and their kids Alejandro, Adriana, Anya, and Ariella left the city life for good in June 2020.

"Who hasn't dreamed of ditching city life and moving to the countryside?" the son of Aga Muhlach and Janice de Belen told PEP.ph then.

The couple chose to settle in Tagaytay where Patty grew up.

Luigi continued, "Life in Tagaytay is great. Life outside our front door is breathtakingly beautiful.

"We enjoy going for walks as a family or quietly gather around our meditation garden for yoga or just simply enjoy bird watching or listening to the crickets chirping.

"Maybe even have a really cold beer while making fresh pizza.

"Our day-to-day life in the countryside is panning out the way we have imagined and prayed for it to be.

"Even the kids seem so much happier now. Life has become calmer and more fulfilled. We just love the natural setting of new life."

They intend to have a farm there, as well as a cafe where people can hold private events.

Use these Lalamove promo codes or vouchers when you shop or order online. Marami pang ibang coupons dito.