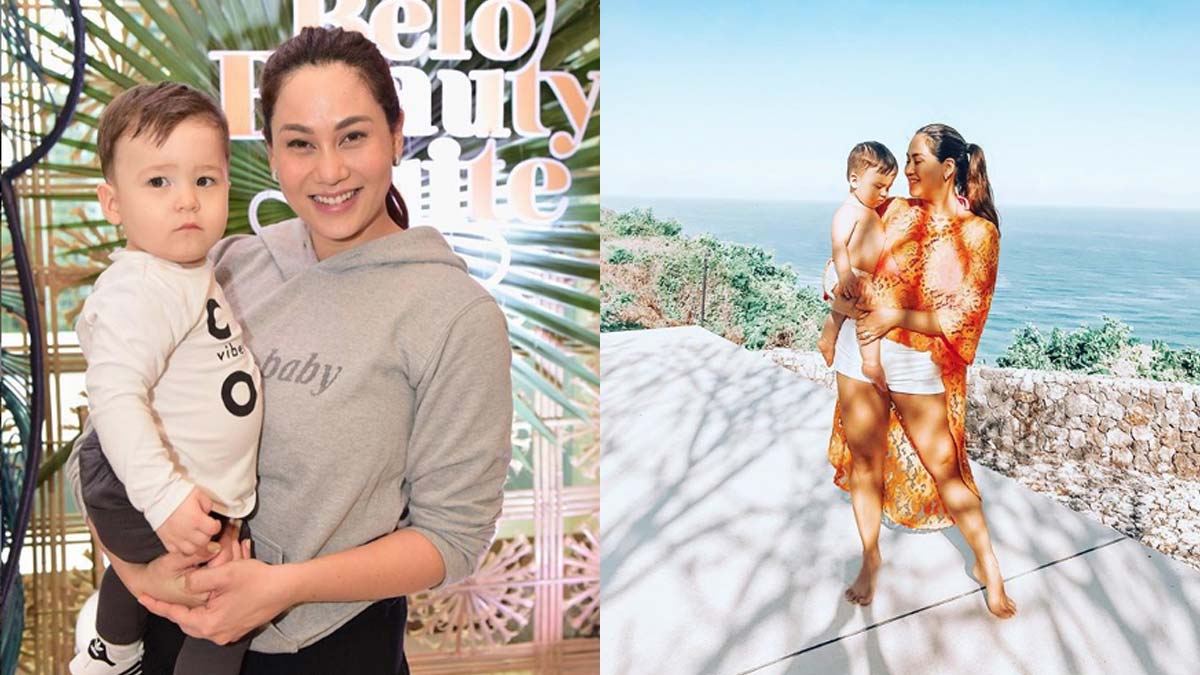 Cristalle Belo is happy to see her son Hunter James growing up active and independent.
PHOTO/S: @cristallebelo on Instagram

Cristalle Belo is happy to say that her son Hunter James is growing up to be an active and happy kid.

"He's doing so well," the celebrity mom gushes to PEP.ph (Philippine Entertainment Portal) during a lifestyle event held on September 9 in Makati City.

"He is currently a year and three months, and we have really seen huge developments in his growth. He's so much more interactive.

"And then we noticed that everything we've taught him throughout the whole months, all of a sudden, he gets it."

Cristalle proudly relates that Hunter has become quite independent for his age, so much so that the little boy can already perform small tasks on his own.

She says, "I love that he's co-dependent. Technically at this point, he's dependent on us, but we've taught him a lot to be independent.

"We've taught him how to sleep on his own, so he's able to soothe himself to sleep. He's able to do small chores, like if I take out his onesie and I'll go, 'Hunter, you know what to do with this.' He’ll go to the hamper."

The beauty mogul sees that following a regular routine and trusting that Hunter understands what he is taught has been helpful.

Cristalle continues, "It really helped us... Even at an early age, di ba? We just used to talk to him so much and teach him stuff. Bahala na if he gets it or not, but right now, he's just exploding with all the information we've [taught] him before and he's such a happy kid."

In addition to that, the first-time mom has been firm with her no-gadgets rule, which means no laptop or cellphone when around Hunter.

The daughter of Vicki Belo says, "We don't want him to be a passive learner. From what I read, when you just give a child a screen, they don't do actions.

"They don't learn by exploring, touching, tinkering. They just watch something, right? That's not the child I want to have.

Cristalle announced that she was pregnant with Hunter in March 2018. She was due to give birth in July, but the celebrity mom gave birth 33 weeks into her pregnancy.

Cristalle and Hunter were confined in the hospital for 20 days with the latter spending his first few days in the Neonatal Intensive Care Unit (NICU).

"Ay, my god, we went through such an ordeal," the beauty entrepreneur recalled to PEP.ph back in September 2018. "We went through the whole premature thing for seven days [in the hospital] then on the seventh day, he got a hospital-acquired infection.

But the whole ordeal proved to Cristalle and husband Justin Pitt that their son is one "strong little boy."

"I think he knew that he had a purpose to be present for his parents, because if not, my god, I don't know what I would have gone through...

"He's such a resilient little boy."

One of the things that helped Hunter gain strength was pure breastmilk.

Cristalle was determined to purely breastfeed Hunter to give him all the nutrients that he needed.

Then, when Hunter turned six months old in December, Cristalle posted on Instagram the stark difference in his weight and appearance from his first month to his sixth month.

The full caption read: "9kg vs 2.3kg. Hunter reached that 6 month mark 2 days ago but technically he's only supposed to be 4.5 months.

"Everyone asks, what vitamins he's on. The answer is: NONE.

"It's pure breast milk (ok let me give a little credit to @justinpitt77’s genes too!)"

As Hunter continues to grow up active and strong, Cristalle is also loving her role as mother more and more.

She tells PEP.ph, "He's so easy and really, as a person, he's someone I enjoy hanging out with.