Nathalie Hart's beauty transformation from 2008 to 2018

Nathalie Hart, formerly known as Princess Snell, transforms from a girl-next-door image to a sexy actress, and will soon embrace her new real-life role as a mom.

The Abay Babes star has gone over many looks, and has changed her image over the years.

And now, before she fully embraces motherhood, here's a look back at her beauty transformation since she joined showbiz in 2008.

Nathalie made her debut in showbiz via Star Magic Batch 16 under the name Kristina Snell.

Like most teen stars, Nathalie started off with a girl-next-door look.

Some of her batch mates included Guji Lorenzana, Erika Padilla, and Enrique Gil.

In the same year, Nathalie posed for FHM.com.ph under the name Marjorie Corwin.

The actress initially denied that it was her, but in an interview with GMA-7's Sunday showbiz talk show Showbiz Central in 2010, she admitted to doing the shoot with ace photographer Jay Tablante.

A year after her debut at Star Magic, Nathalie felt that her star didn't shine as bright as her peers.

She tried her luck via the rival network, GMA7-'s artista search, Starstruck V.

During this time, Nathalie started coming out of her shell and donned more daring OOTDs to shed off the girl-next-door image.

Nathalie used the name Princess Snell for the reality-talent competition, and was the 5th to be eliminated on the show.

Steven Silva and Sarah Lahbati were named Ultimate Survivors of that season.

Nathalie made a major transformation while Starstruck V was still on air.

She chopped off her locks and sported a bob.

With this look, she was compared to Eat Bulaga! host Pauleen Luna for their resemblance.

Some of her projects at the Kapuso network that year included My Lover, My Wife and Captain Barbell Ang Pagbabalik.

Her doll-like features started to appear in 2012. Nathalie's round, chubby cheeks diminished.

Her strong, mestiza features bagged her the role of young Victoria Sanreal, one of the main antagonists in the Kapuso network's epic fantasy series Indio.

In 2014, the 26-year-old actress started using the name Nathalie Hart as her screen name.

Her manager Leo Dominguez and Regal Entertainment Inc.'s Roselle Monteverde came up with the name.

"There was one meeting na, ‘Ano kaya ang pangalan namin,’ blah-blah-blah. And then they ended up with Nathalie and sabi nila, ‘Iyan na ang pangalan mo!’

"I was on my cellphone, sabi ko, ‘Okay! Iyan na yung pangalan ko.’"

In 2015, Nathalie took a short break from showbiz and explored different countries including Austria, Sweden, and Germany, among many others.

Nathalie fully embraced the sexy-actress image in 2016 after starring in the indie films Tisay and Siphayo.

In the same year, she won her first Best Actress award for Siphayo at the International Film Festival Manhattan (IFFM) in New York City, USA.

"Ang masasabi nila, actress na ako, so it's a good feeling as well."

She continued accepting daring characters including the one portrayed in the movie Historiographika Errata, an official entry to the 2017 Cinema One Originals film festival.

At one point, Nathalie ditched the dyed locks and went back to her black natural hair color.

She also toned down her makeup, but her look always highlighted her fuller lips.

In an interview with Boy Abunda for Tonight With Boy Abunda last February, Nathalie admitted to going under the knife to enhance her features.

The Sin Island star said, "I had lip tattoos, eyebrow tattoos, I think I've said it before that I had enhancements on my boobs, so I really don't care [about the retokada issue]."

In an interview with Vice Ganda for the show Gandang Gabi Vice, Nathalie recalled one instance when a guy thought she was a trans woman.

"'Tapos sabi niya, 'You know what, you look so great, like where did you [have] your surgery?'

Nathalie stripped down to her birthday suit as FHM Philippines' final print cover girl for their May 2018 issue. 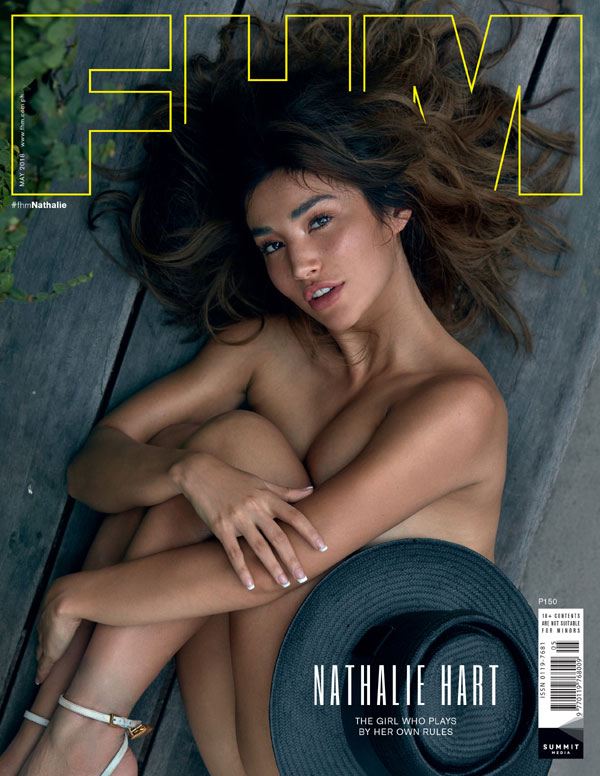