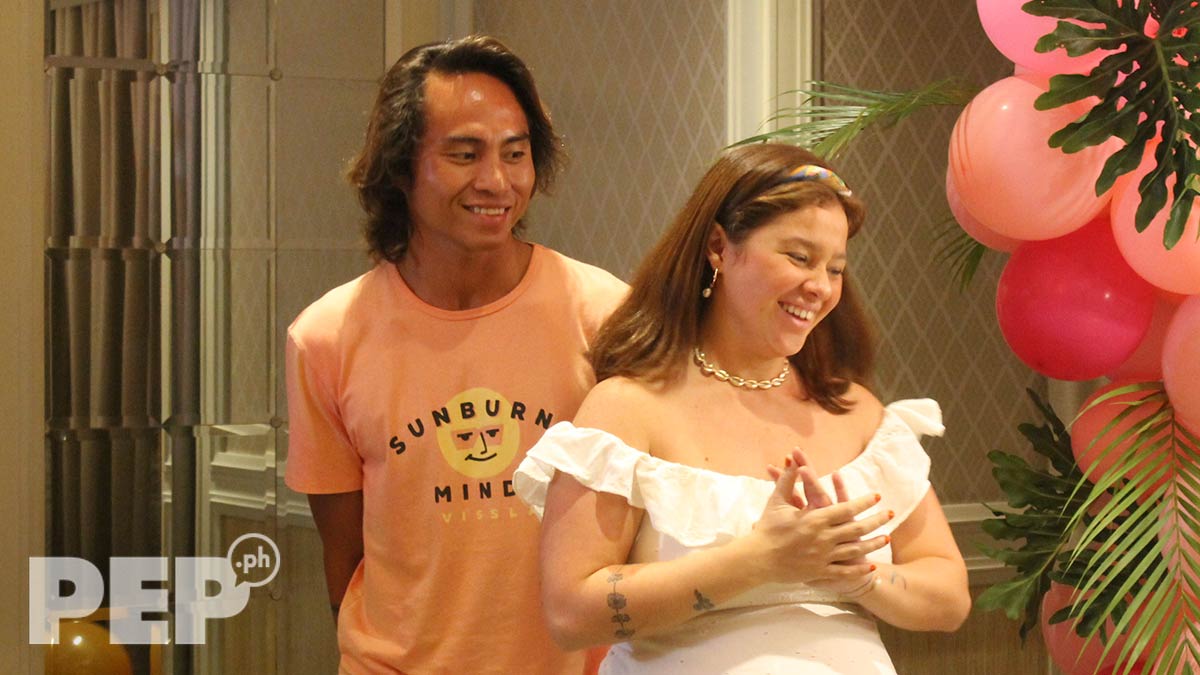 Andi Eigenmann is experiencing an "easier" pregnancy this time around, thanks to the presence of her boyfriend, surfing champion Philmar Alipayo.

"It's so much easier because I have Philmar who takes care of me," the soon-to-be mother of two tells PEP.ph (Philippine Entertainment Portal) at her baby shower held on June 22.

"I don't really expect anything from him, but sometimes, I notice these little things that I got to experience the first time by myself and realize that, 'Oh, when it's done pala with a partner, it feels so much better or it gets so much breezier.'"

One of the instances Andi cites is going to the doctor.

"Normally, I don't like going to the hospital. Even if it's just for a check-up, I'm scared to know that there's something wrong with me. And my mom, it really frustrates her.

"But there are times na with pregnancy check-ups, you have to stay in the hospital for a while, like, for blood tests. The glucose test, that's the worst.

"Before, I was dreading going to the hospital because I had to sit around and wait there for hours alone.

"This time, I didn't need to do any of those by myself. So, automatically having someone to share that with meant a lot to me without me realizing, because it made the wait and the dreaded tests go by so smoothly."

HOW'S PHILMAR AS A DAD?

The fact that Philmar is also a parent gives Andi some level of assurance that they know what they are getting themselves into.

"I feel like it helped a lot just because he knows how it feels already, I already know and I can see that he will be a good dad to my daughter because he's such a good dad to his," the 29-year-old actress says.

The Siargao-based surfing champion has two sons: Toro, who is also from Siargao, and Kanoa, who is based in France.

Andi, who is a mother to seven-year-old Ellie, says Philmar misses Kanoa, and she hopes that the arrival of her second daughter will ease his longing.

"It's really something that Philmar was so excited about because he gets to have somewhat a second chance to have his child here with him this time.

"He used to live in France, that's why, but then he came home eventually when he separated with the mom.

"I know and I see how much he misses him, so having another one… I know it makes him miss his son more because he would want them to be together.

"But, at the same time, I feel like it would be a good thing for him also to finally be able to have his daughter to express the love he wants to give his son that he hasn't."

All in all, Andi feels this pregnancy has been "easier" for her because she is "in a different situation now."

The daughter of Jaclyn Jose and the late Mark Gil said, "I'm not as in front of the spotlight as I was before, and I'm older.

"I'm here na at this point in my life talaga that I want to have more kids and have my family grow."

HOW'S PHILMAR AS A PARTNER?

Andi reveals that Philmar was a hands-on father with his son Kanoa when he lived with him in France.

The now-Siargao-based star says, "He took care of his son. He said, 'Kulang na lang I will breastfeed my son.'

In fact, Philmar is adamant about not hiring a nanny for their baby.

Andi continues, "He's so firm in saying, 'We don't need a nanny. Not yet, because I can do everything, and I don't want other people I don't know carrying my baby.'"

This makes Andi looks forward to facing the challenges that she will face as a mom.

"Oh, I think this guy can really help me," she adds. "Mas ano siya, mas confident kaysa sa akin. It makes my fears go away somehow."

Given the way Andi raves about Philmar, have they started talking about marriage?

The celebrity mom answers, "Oh, I don't know. Marriage is not something that I think about. I just feel, like, if you're more traditional, you'd want to get married.

"I used to think I had to, but having Ellie and loving my life now and where I am, being so happy, this life is enough for me.

"But if I were to get married, I think that would make me happy also.

"But it's not something that I need to experience in my life."

Andi's boyfriend currently ranks 6th on the men's short board division of the Philippine Surfing Championship Tour (PSCT), the country’s first-ever and only professional surfing tournament.

He also made history for being the first-ever Filipino champ of the PSCT after winning the 19th Siargao National Surfing Cup in 2017.

So when Andi met him sometime in 2018, it was the actress who approached the surfer for a photo op.

A native of Siargao, Philmar's interest in surfing started when he was 10 years old, and was cultivated by his uncle, Fernando "Yok-Yok" Alipayo, who became the first Filipino to make it to the finals of Siargao Cup's international division in 2001.

Andi's boyfriend also teaches surfing to tourists at Harana Surf Resort, and is into customizing bikes.

Philmar co-owns a lodging house with Andi in Baler, Aurora, which is also one of the country's top surfing spots.