The best-dressed stars at ABS-CBN Ball 2019 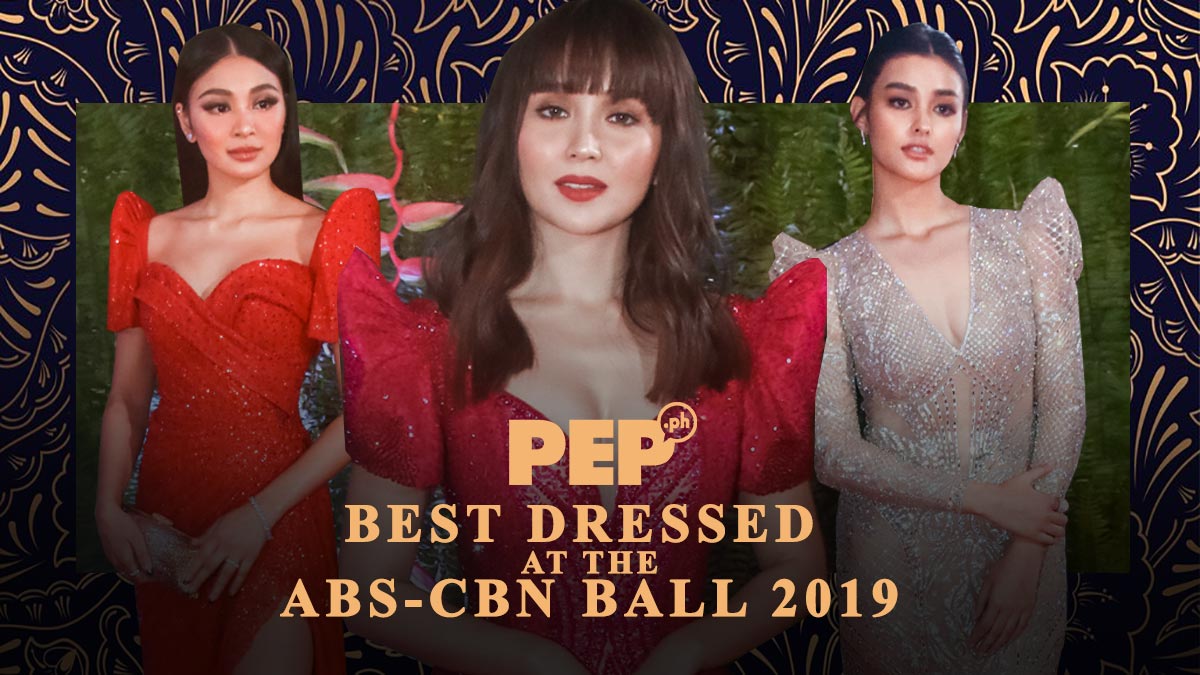 Nadine Lustre, Kathryn Bernardo, and Liza Soberano are among the best-dressed celebrities at the ABS-CBN Ball 2019.
PHOTO/S: Mark Atienza

The ABS-CBN Ball 2019 takes Pinoy Pride to a new level with Filipiniana as the night's theme.

Weeks before the much-awaited event, celebrities were already expected to dazzle at the red carpet with their fresh and fearless takes on traditional Filipino garb.

Here are the A-listers who proved they are Pinoy and proud by slaying the red carpet with much class and glam.

“Actually si Michael lang nag-design and I said I want something with the indigenous print,” the Kapamilya star tells PEP.ph (Philippine Entertainment Portal).

Michael also designed Kathryn’s black outfit during the Star Magic Ball in 2016 and the white gown that won her the best-dressed title in 2015.

The 'Queen of Record-Breaking Movies' was styled by Jan Aranilla. Her glam team includes Justine del Rosario for make-up and Chris Rodil for hair. 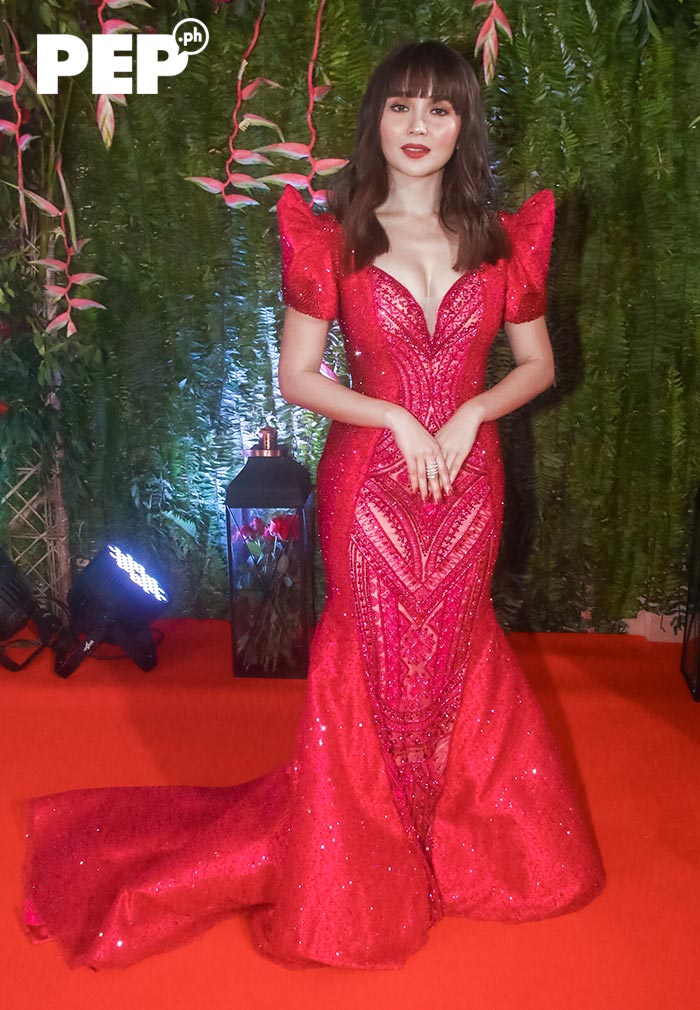 Liza Soberano’s shimmering white column-cut gown emulated the actress’s classy persona. In an interview with Metro channel, she said that her designer, Patricia Santos, conceptualized it with the Barong Tagalog in mind.

Celebrity stylist Perry Tabora helped dress her up for the event. Mickey See was in charge of her make-up. Meanwhile, Raymond Santiago styled her hair in a bun. 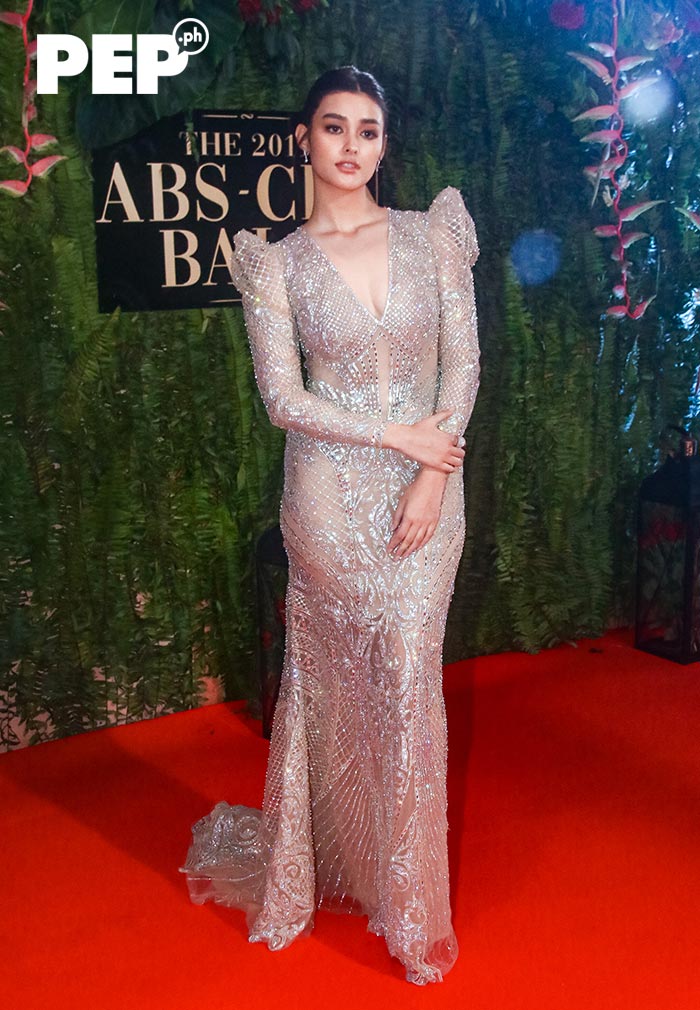 In his Instagram post uploaded on September 14, the designer revealed that the gown is dubbed as "Traje De Magdalena" and inspired by the fierce Lioness of Filipina Agents, Magdalena Estiosta Leones. 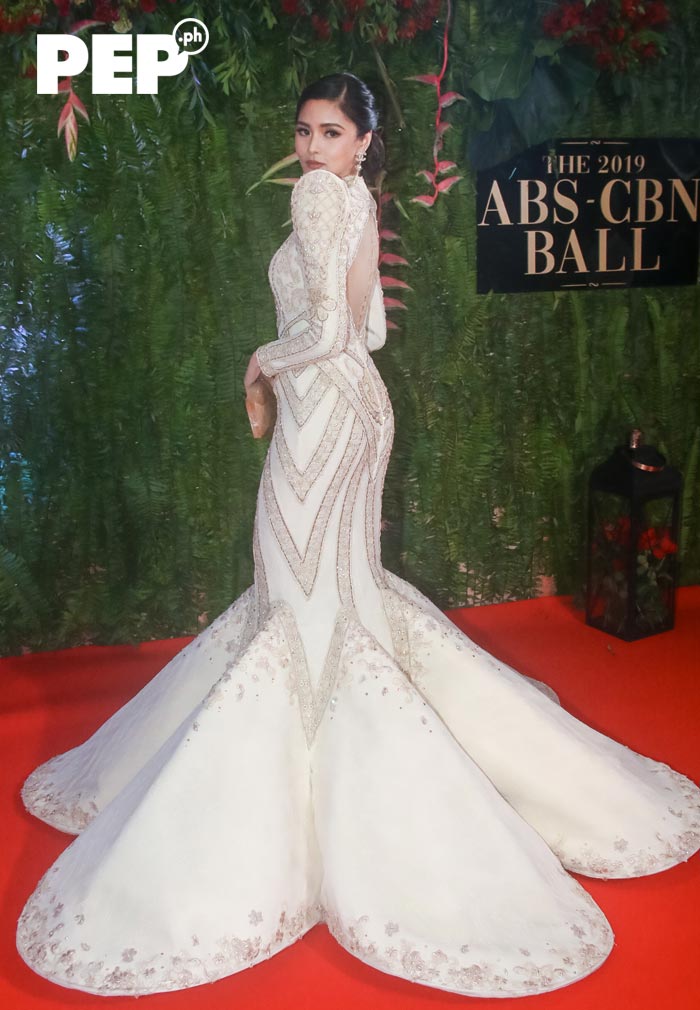 Nadine Lustre's all-red outfit aptly personified a modern Filipina—sophisticated and at the same time powerful. Her designer Michael Leyva was able to incorporate snazziness into the traditional terno with the use of glittery red textile and a thigh-high slit that flaunted the sexy actress's slender physique.

For this look, Nadine was styled by Joanna Garcia. The highlight of her red carpet beauty look is the touch of crystal on her lower lash line courtesy of her go-to make-up artist Jelly Eugenio. Meanwhile, hairstylist Paul Nebres gave the Viva talent a sleek straight hair with a middle part. 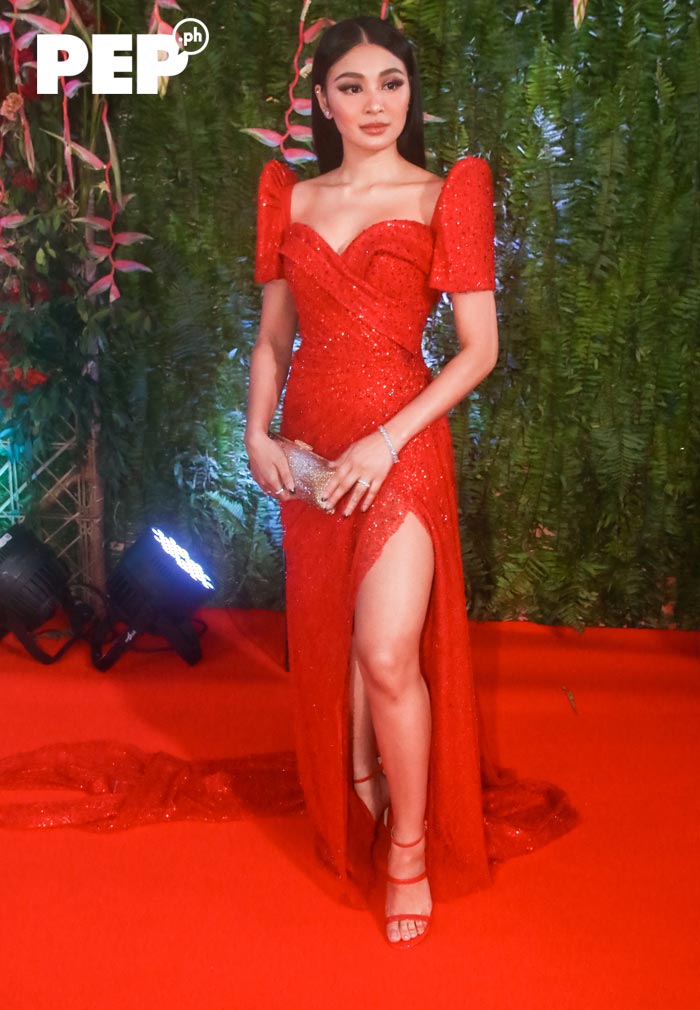 In an interview with Raymond Gutierrez for Metro Channel, the It's Showtime host stated that his look takes inspiration from "Manila Carnival Queen in the 1930s."

Vice Ganda sought the help of celebrity stylist Liz Uy to dress him up for the ball. Meanwhile, Emman Concepcion and Buern Rodriguez teamed up to make Vice Ganda's beauty look for the event. 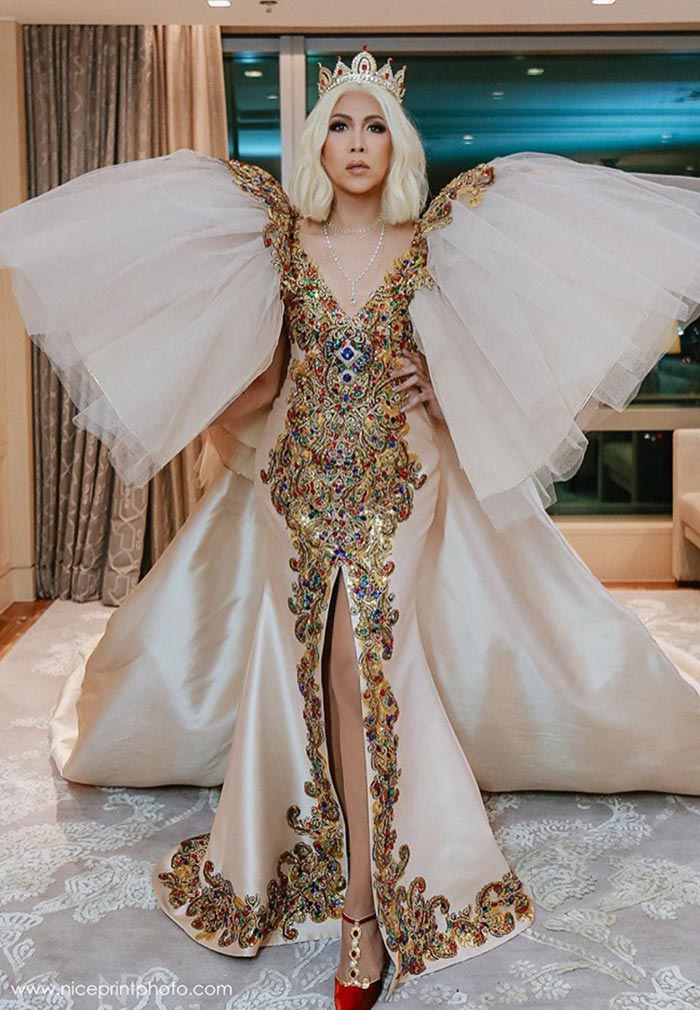 Bea Alonzo was hailed Best Dressed of the Night Female at the ABS-CBN Ball in her black venus-cut gown designed by Jun Escario. Her Filipiniana, according to the actress, is a "modern rendition of the Balintawak dress." 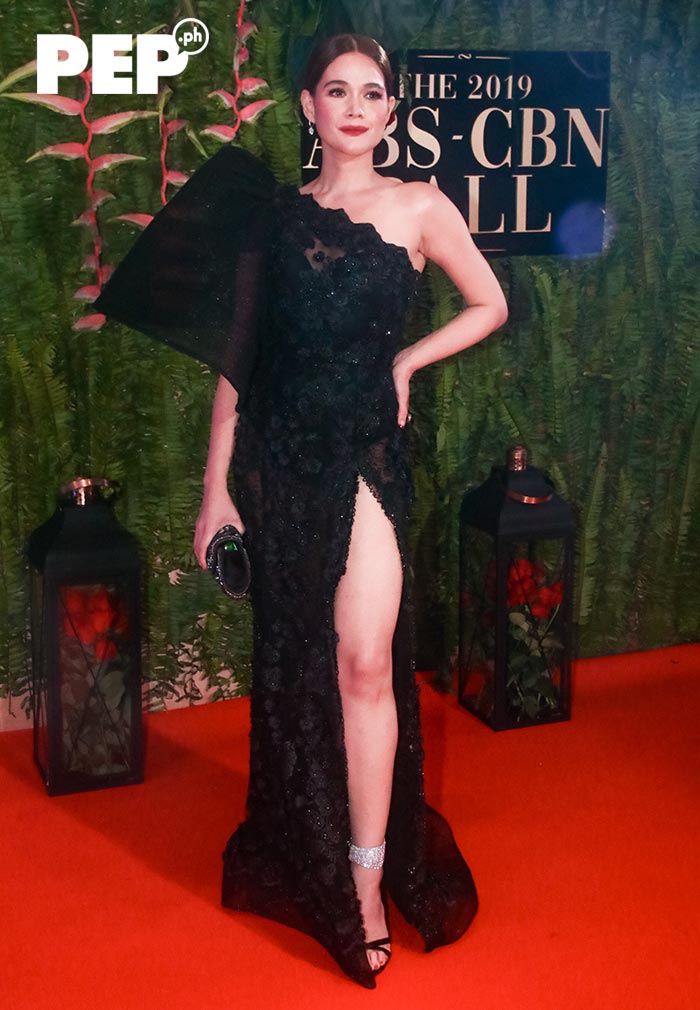 Miss Universe 2015 Pia Wurtzbach came and slayed the runway with a daring Filipiniana gown made by Dubai-based Filipino designer Ezra Santos of Ezra Couture. The former beauty queen unleashed her "inner diva" in this printed ensemble. She was also styled by Pam Quinones with Leanne Ledesma and Mac Intia of Qurator Studio. 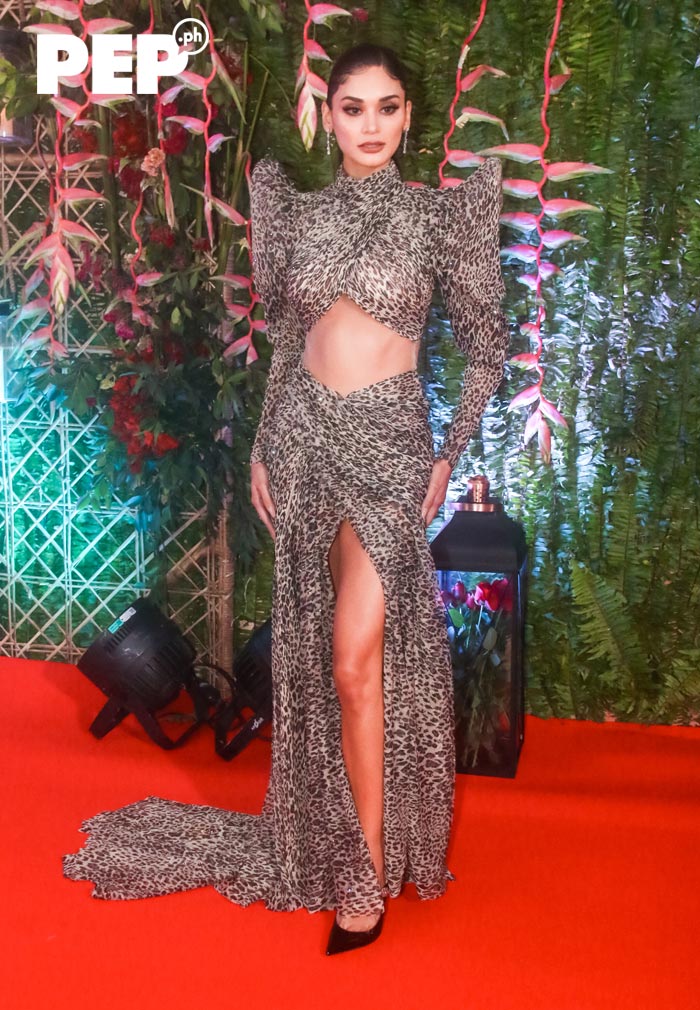 Maja Salvador is a vision in this white asymmetrical Filipiniana by Puey Quinones. The 30-year-old Kapamilya actress effortlessly exuded elegance and sophistication in her immaculate white gown.

She was styled by Cath Sobrevega. Gela Laurel was in-charge of her make-up while Jay Wee have the Kapamilya actress a classy low bun hairstyle. 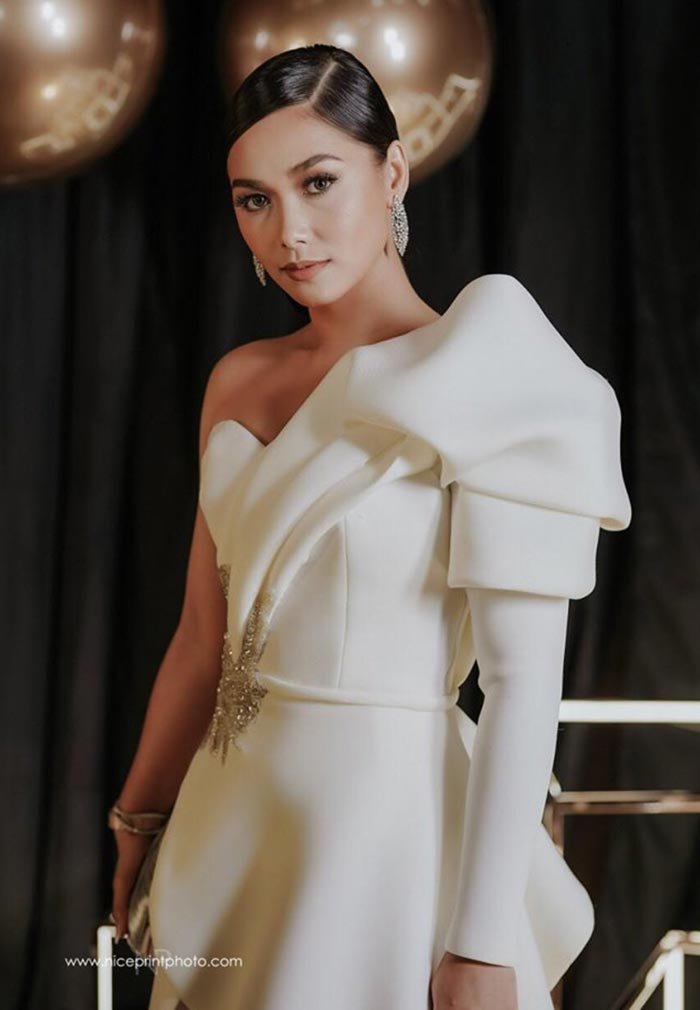 Anne Curtis opted for a "classic meets modern" Filipiniana by Mich Dulce. The oversized sheer butterfly sleeves are enough to make a statement on the red carpet. The designer's signature headpiece also complimented the over-all style.

The It's Showtime tapped make-up artist Robbie Pinera and hairstylist Raymond Santiago to be part of her ABS-CBN Ball glam squad. 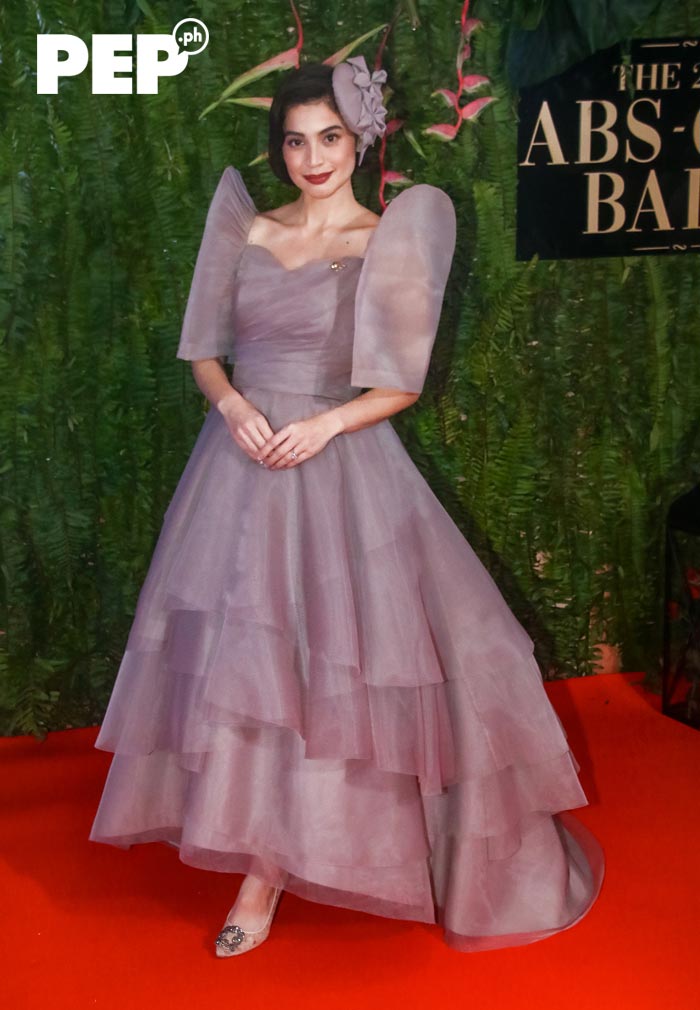 Kylie Padilla is ethereal in her traje de mestiza-inspired custom gown by AJ Javier. The GMA-7 actress's went for a romantic and whimsical red carpet look as she attends the ball with her husband Aljur Abrenica. She completed her look with a black choker necklace, a minaudiére by Christopher Munar, and a pair of blush pink Manolo Blahnik Hangisi pumps.

For this look, Kylie was styled by Mayumi Seki. Her make up was done by Liah Roxas-Magundayao while her hair was made by George Moraca. 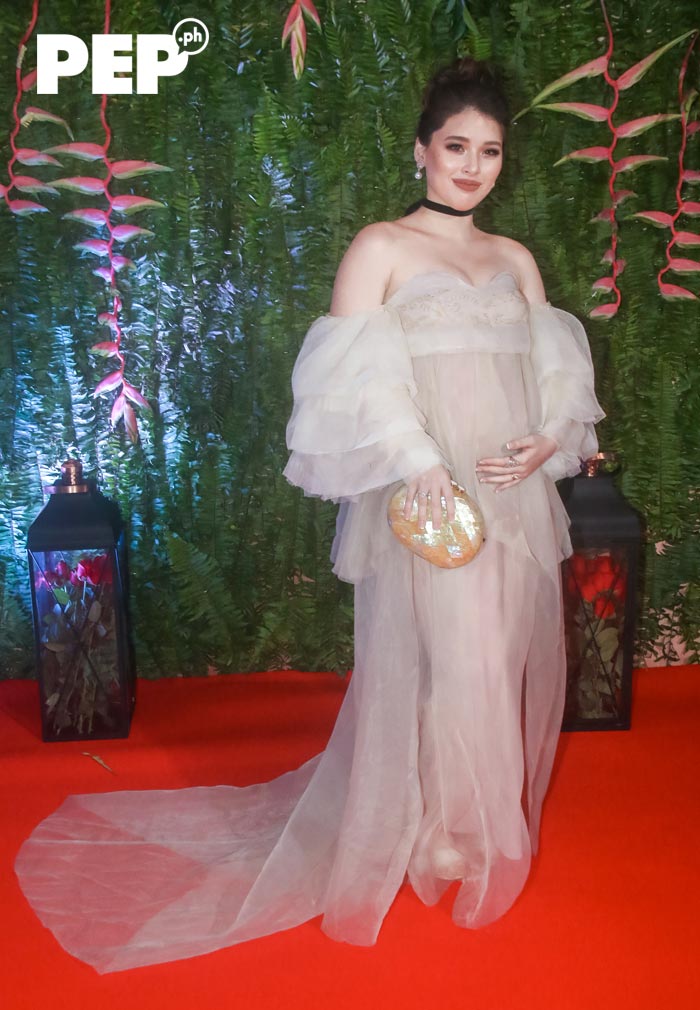 MAYMAY ENTRATA IN FURNE ONE

Maymay Entrata walked away with the "Belle of the Ball" award the ABS-CBN Ball 2019 wearing a detailed column gow by Dubai-based Filipino fashion designer Furne One.

According to the former Pinoy Big Brother housemate, the designer took inspiration from the prominent Filipino families in the Spanish era.

Maymay was styled by Rain Dagala and Em Millan. Meanwhile, her glam team includes Owen Sarmiento for make-up and Jaymar Lahaylahay for hair. 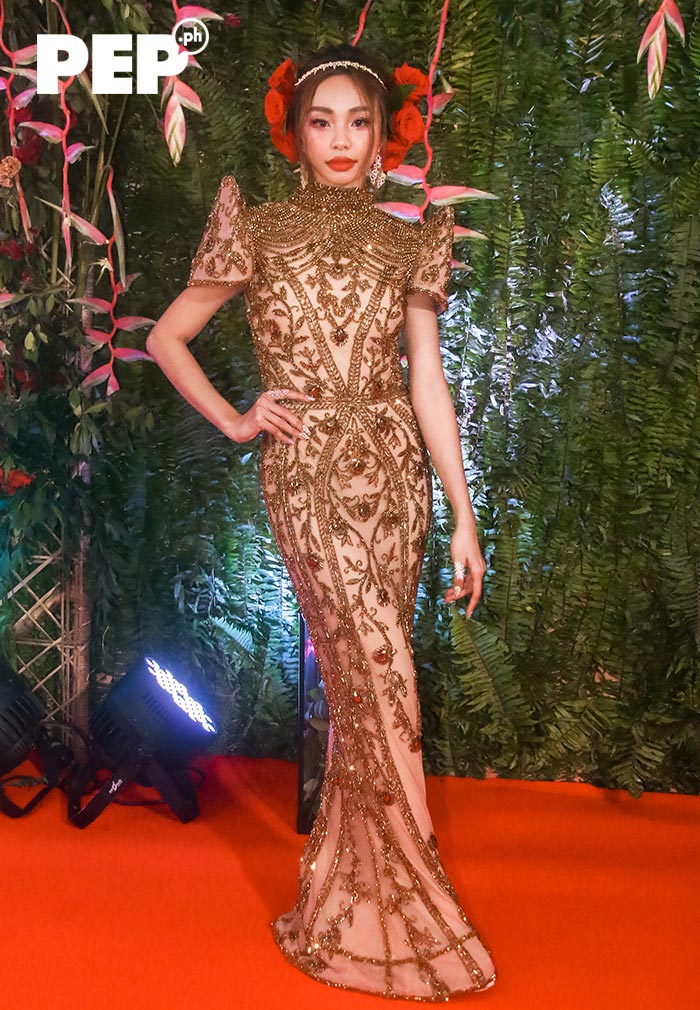 Miss International 2016 Kylie Verzosa looked stunning in her black Cary Santiago Filipiniana for the ABS-CBN Ball. The intricate details of Kylie's Filipiniana, which looked like they were tattooed on her skin. According to Kylie, the designer's inspiration for the gown are "the tribal tattoos of the Philippines." 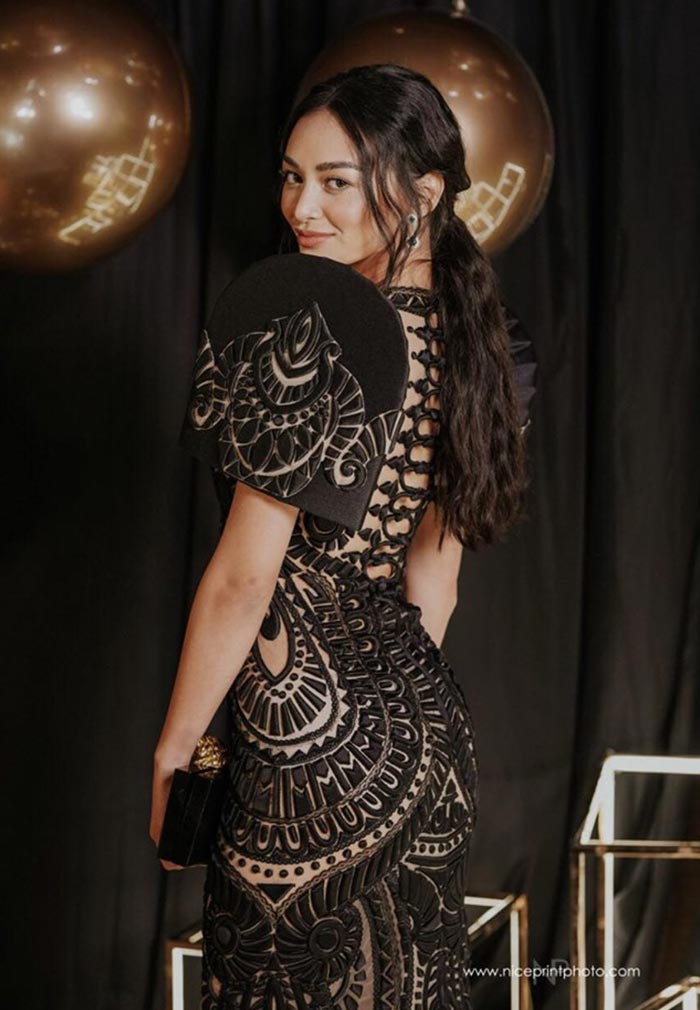 Ylona Garcia is owning her title as this generation’s golden girl—literally! The teen actress stuns in a sequined two-piece Filipiniana by Michael Leyva. Ylona's golden ensemble was also a blend of Filipino and western fashion. The designer merged traditional elements of a Filipiniana with the western 1920s flapper style. 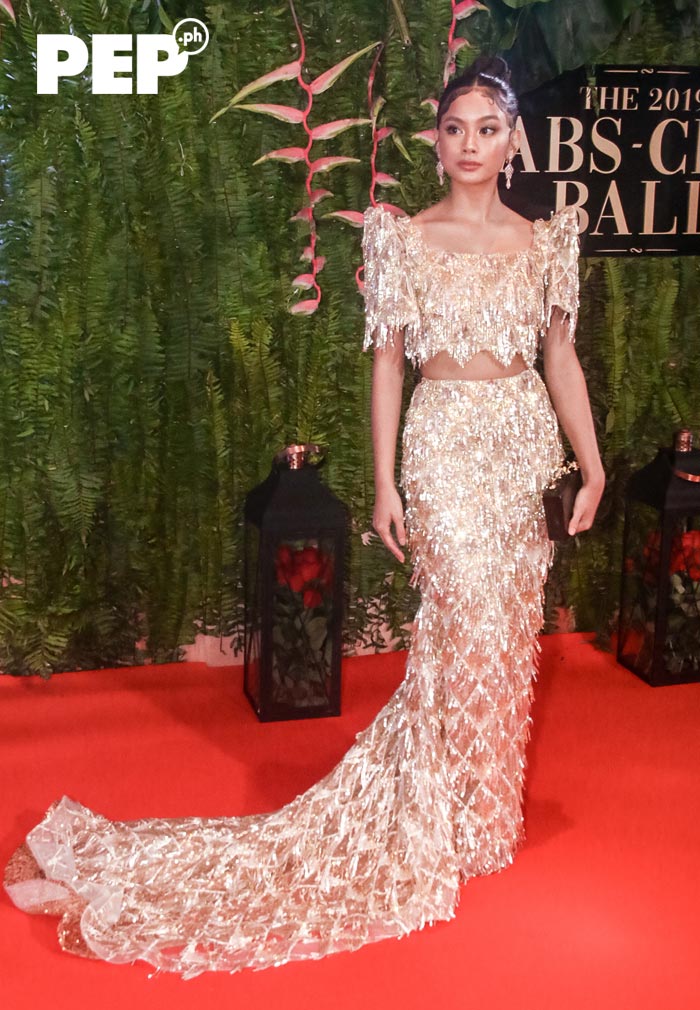 Beauty Gonzales is also a standout in her gray Cary Santiago terno. The avian detail made through a complicated fabric manipulation is the highlight of her Filipiniana gown.

Asked about the theme of her red carpet look, Beauty said, "I told him [Cary] na I really want to wear something about freedom, about Kadenang Ginto, about Bantay Bata 163, freedom for a good education, and freedom for good services... freedom for women's rights, freedom for SOGIE and everything. So, this is my theme tonight." 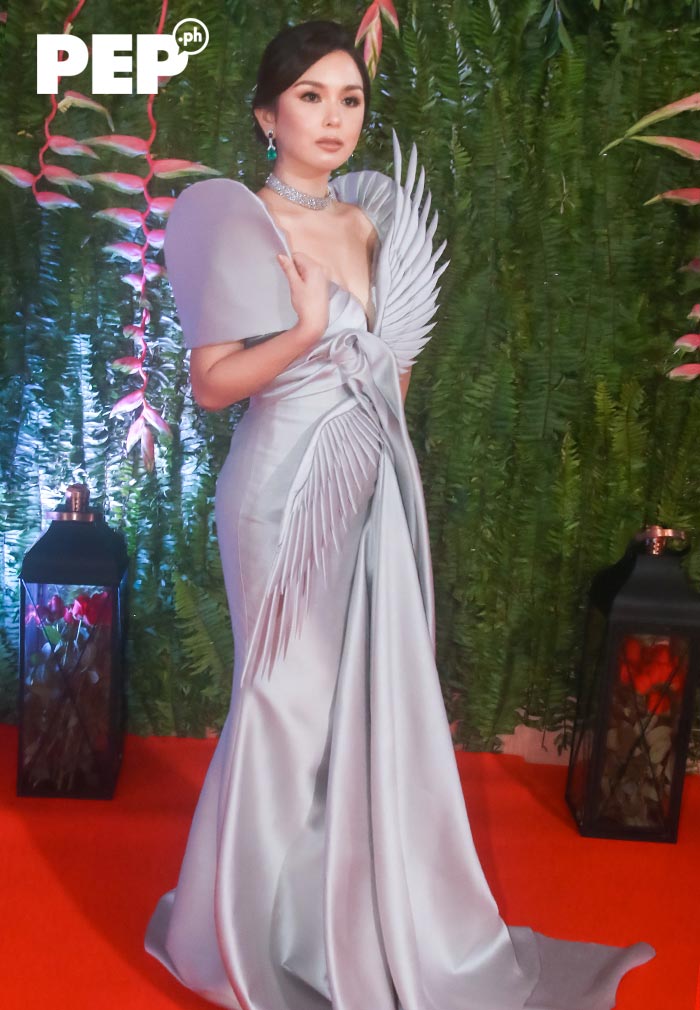 It is safe to say that Michael Leyva was among the standout designers of the night as Janella Salvador hit the red carpet in his modern take on baro't saya. According to the designer, Janella was very much hands-on to achieve this modern Maria Clara-inspired gown. 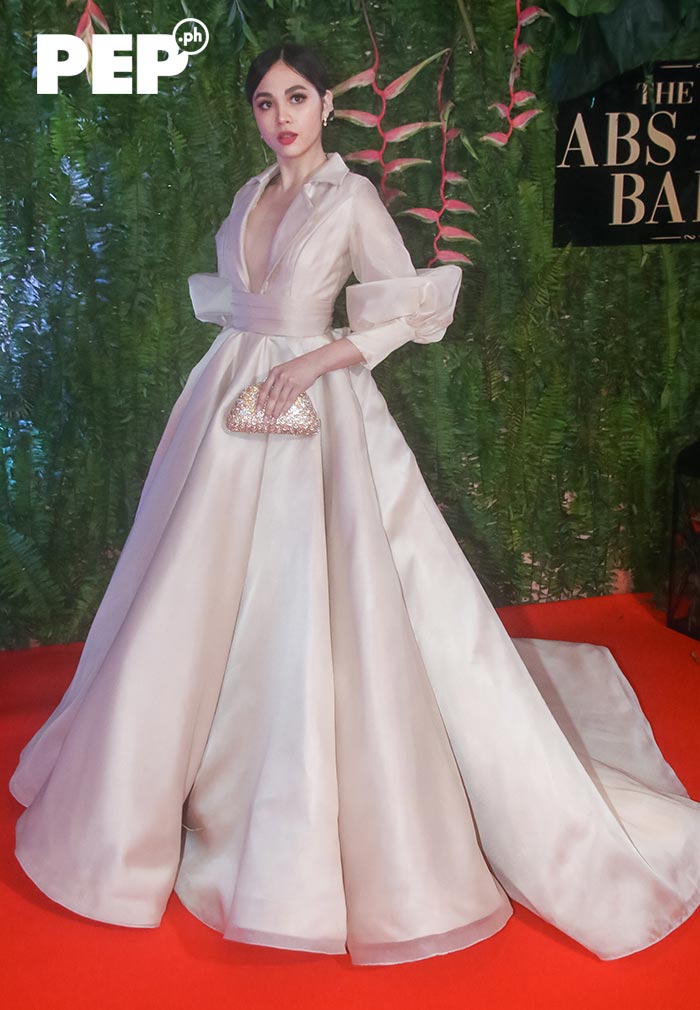 This year, ABS-CBN aims to raise funds for the benefit of Bantay Bata 163 and their Bantay Edukasyon Program "to help the children reach their dreams."